ATLANTA - Since before Election Day, the FOX 5 I-Team has been singularly focused on investigating the integrity of our election and the accuracy of the vote count.

The team has spent the last week investigating reports of problems and have found only a small number of errors.

Their findings come as Republican U.S. Senators Kelly Loeffler and David Perdue call on Republican Sec. of State Brad Raffensperger to step down, saying he did not deliver an honest or transparent election.

And today, the head of President Trump's recount team in Georgia, Republican Rep. Doug Collins, called for Raffensperger to conduct a hand count of all the ballots cast in the election. That's more than 5 million.

Senior I-Team reporter Dale Russell sat down with Raffensperger as he defended the integrity of the election and the job he did.

Russell: Has there been any systemic voter fraud in the State of Georgia?

Raffensperger: We have not found any widespread voter fraud. 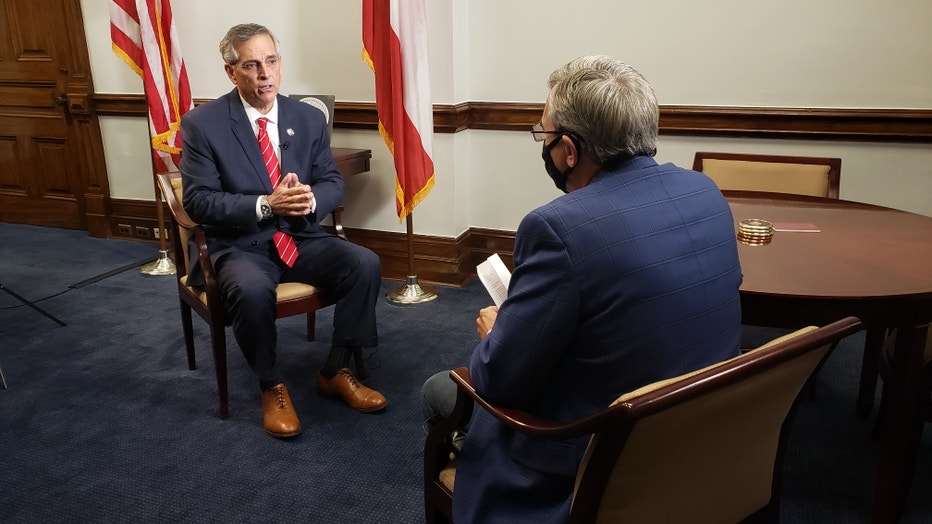 Senior I-Team reporter Dale Russell sits down with Georgia Sec. of State Brad Raffensperger as he defends the integrity of the 2020 election.

Sec. of State Brad Raffensperger wants Georgians to know their vote was properly counted and his office is diligently looking for any signs - anywhere - of voter fraud.

"We have POST certified investigators. These folks carry a gun. They came out of law enforcement, they've done, you know, the types of investigations that you need. They know what they're doing and will investigate everything," said Raffensperger.

Raffensperger is fresh off the hotly contested presidential race in Georgia that shocked many when Democrat Joe Biden climbed into the lead and held on, that lead is now just over 12,000 votes.

Democrats were jubilant. President Donald Trump supporters shocked. Trump told his base through tweet after tweet the election was stolen.

Not so, says the Republican Secretary of State.

Rep. Doug Collins, who has been tasked on behalf of the Georgia Republican Party and the Donald J. Trump for President Campaign to oversee a recount in Georgia, speaks with FOX 5 senior anchor Russ Spencer.

Despite the mostly smooth election process in Georgia, yesterday Republican Senators David Perdue and Kelly Loeffler issued a joint statement calling on Republican Raffensperger to resign. They wrote, including without any facts to back it up, that his "management has become an embarrassment for our state" and that Raffesnperger has "failed to deliver honest and transparent elections."

"I was disappointed. What I never like to see is our house divided. Because as Secretary of State my job is make sure we have honest and fair elections, but also as a Republican, as a conservative, I'd like to see our side win. But, then you have to win fair and honestly," said Raffensperger.

We reached out to Loeffler and Perdue to find out specifically what facts they based their statement on and neither responded for comment.

Raffensperger and some members of his staff have had threats in the wake of the election. He did not want to discuss it, but we were told old extra security for all involved is now in place.

Raffensperger says he will conduct a full audit, as required by Georgia law and expects a recount. He says it will be near on the deadline of November 20 before he certifies the results.