Abortion providers and advocates are challenging Georgia state's six-week abortion ban in court. The group has filed a lawsuit in effort to block the law, arguing that it violates the state constitution. A Fulton County superior court judge is now hearing oral arguments in the case.

FULTON COUNTY, Ga. - A trial to determine whether Georgia can continue to ban abortion as early as six weeks into a pregnancy began in an Atlanta courtroom Monday.

Fulton County Superior Court Judge Robert McBurney scheduled two days of testimony in a lawsuit filed by the ACLU and a group of physicians and reproductive healthcare advocates that seeks to strike down the law on multiple grounds, including that it violates the Georgia Constitution’s right to privacy and liberty by "forcing pregnancy and childbirth upon countless Georgians."

Advocates say every day the law stays in place women are being harmed.

"It means they either have to forcibly remain pregnant or find a way to get out of state to go to a state that provides more access," Planned Parenthood spokeswoman Susan Lambiase said.

The state attorney general’s office responded in a court filing that Georgia’s privacy protections do not extend to abortion because it affects another "human life."

Georgia’s law bans most abortions once a "detectable human heartbeat" is present. Cardiac activity can be detected by ultrasound in cells within an embryo that will eventually become the heart as early as six weeks into a pregnancy. That means most abortions in Georgia are effectively banned at a point before many women know they are pregnant. 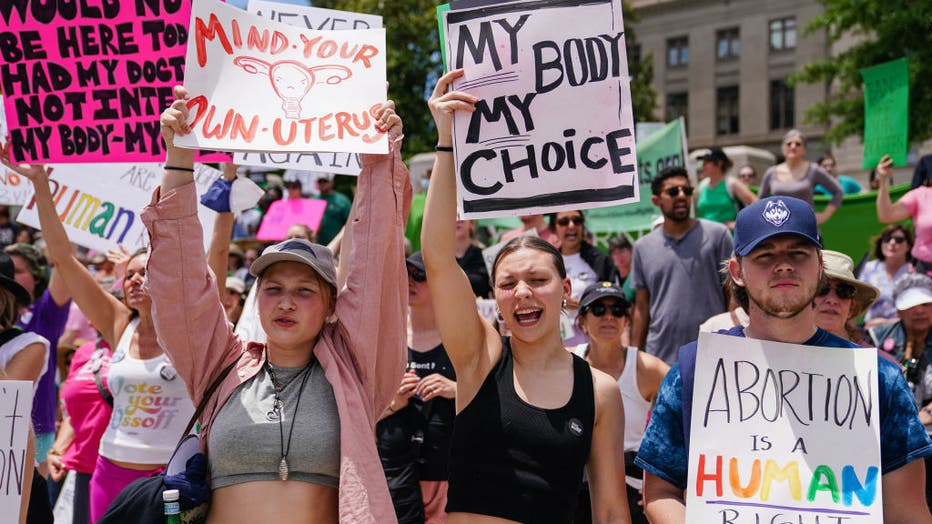 Activists rally outside the State Capitol in support of abortion rights in Atlanta, Georgia on May 14, 2022. - Thousands of activists are participating in a national day of action calling for safe and legal access to abortion. The nationwide demonstr

The doctors and advocacy groups that filed the lawsuit before McBurney in July also argue the law was invalid from the start because it violated the U.S. Constitution and U.S. Supreme Court precedent when it was enacted.

"Void out of the gate, because at the time of its passage in 2019 it violated the U.S. Constitution and precedent set by Roe v. Wade and Casey v. Planned Parenthood," Attorney Julia Stone said.

Georgia’s law was passed by state lawmakers and signed by Republican Gov. Brian Kemp in 2019 but it had been blocked from taking effect until the Supreme Court overturned Roe v. Wade, which had protected the right to an abortion for nearly 50 years. The 11th U.S. Circuit Court of Appeals allowed Georgia to begin enforcing its abortion law just over three weeks after the high court’s decision in June.

Georgia's abortion law will stay in effect after a judge in Fulton County ruled he doesn't have the authority to block it. The law bans most abortions once a fetal heartbeat is detected.

The law includes exceptions for rape and incest, as long as a police report is filed, and allows for later abortions when the mother’s life is at risk or a serious medical condition renders a fetus unviable.

The state has argued that the Roe decision itself was wrong and the Supreme Court ruling wiped it out of existence.

In August, McBurney rejected a request by the plaintiffs to immediately block the abortion law while the lawsuit was pending, though he stressed that decision did not touch on the merits of the case. Earlier this month, he denied a request by state officials to postpone the trial, which he will decide, not a jury.