VENICE, Fla. - With Gabby Petito still missing, 50 law enforcement officers from five agencies, including the North Port Police Department and the FBI, began searching the Carlton Reserve, a 25,000-acre park in Venice, Florida – not for Gabby, but for Brian Laundrie, a person of interest in her disappearance, who himself has not been seen for days.

After a full day searching for Brian in the swampy wilderness area, crews halted their search as nightfall set in.

Taylor said in a statement Saturday night that Laundrie's family reported him missing Friday – after their son went for a hike Tuesday but never returned. Taylor said the search of the Carlton Reserve was prompted by information from parents about the 23-year-old's last known location.

"Brian’s parents have reported to us that he was last seen Tuesday when he went for a hike there. They reported him missing three days later. The North Port Police Department and the FBI are working to corroborate the story," Taylor's statement said.

Taylor said Saturday's search did not turn up any signs of Brian, but the search would continue Sunday.

In earlier statements, Taylor said the Laundrie family told officers Brian's car was found at the reserve and driven to their home from there. Taylor did not elaborate on a definitive time frame for the car being driven home.

As day one of the search for Brian wound down, FBI agents were preparing to search Wyoming's Grand Teton National Park for Gabby, who was reported missing on September 11.

Petito had been traveling out west with Laundrie in a camper van. He returned to North Port Florida on September 1 with the van, but without Petito and has been refusing to talk to law enforcement officers.

Taylor said the search for Gabby was taking place in Wyoming based on investigations into the last place she is believed to have been. Taylor added, "We're doing everything we can, within the law, to get answers."

Police have confirmed that law enforcement has access to pings from Brian and Gabby's mobile phones, however, it's unclear if those devices were currently turned on and providing investigators with current location information.

Taylor said that Laundrie's parents did not provide any information to officers Friday night about Petito. 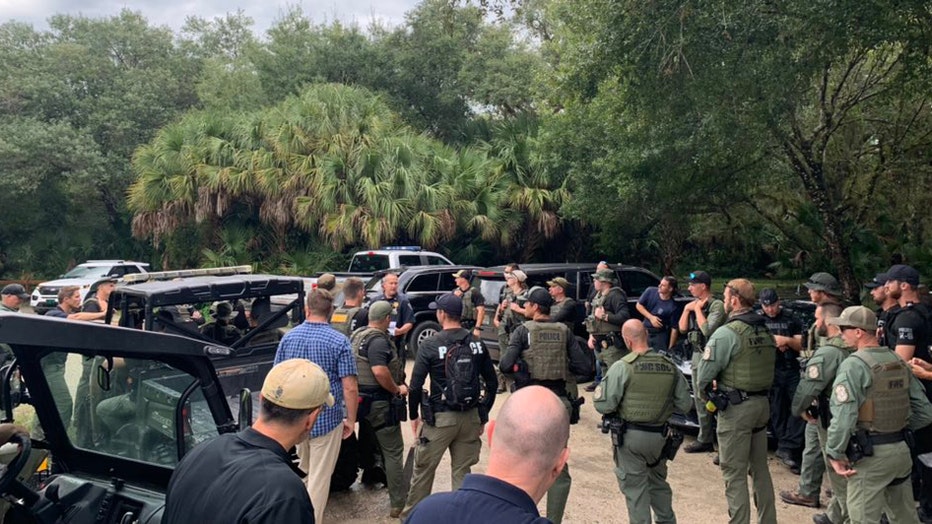 PREVIOUS 'We all fight for each other': Disappearance of Gabby Petito unites North Port community

Jason Anderson lives across from the Carlton Reserve and says he heard helicopters flying over the area beginning around 6 or 7 p.m. on Friday. When he woke up Saturday morning he and his wife saw police officers, the FBI and dogs outside.

"It didn't take a rocket scientist to figure out what they were looking for," Anderson commented.

Jason Anderson lives across from the Carlton Reserve and says he heard helicopters flying over the area beginning around 6 or 7 p.m. on Friday. When he woke up Saturday morning he and his wife saw police officers, the FBI and dogs outside.

He went on to say that the reserve goes on for miles and miles and it would be a good place to get lost and not be found if that's what someone wanted to do. However, he hopes law enforcement finds Laundrie and Petito.

"The greatest thing would be to find the girl first," Anderson stated. "Tell us where she is and give some peace to the family. I don't want this to be a long, drawn-out thing. Find the guy immediately."

North Port Police Department Public Information Officer Josh Taylor said Laundrie’s family spoke with officers Friday night because they were concerned about the well-being of their son. The family told officers they believed he entered the reserve earlier this week.

Taylor said authorities are hopeful they will find Laundrie in the reserve, but added, "These are people who are used to living off the grid. I don't know if he would do day-hikes out here or whatever, but you could be out here for several months if you wanted."

Anyone with information on Laundrie or Petito’s whereabouts is asked to call 1-800-Call-FBI.