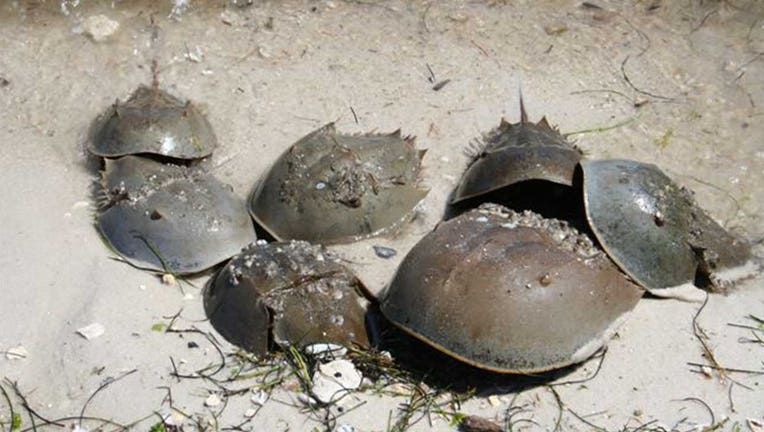 "When mating, male horseshoe crabs move parallel to the shoreline on sandy flats and intercept females as they pass by. A male attaches himself to the top of a female’s shell by using his specialized front claws, in a position known as amplexus, and ( Florida Fish and Wildlife Conservation Commission )

TAMPA, Fla. - Biologists with the Florida Fish and Wildlife Conservation Commission are asking beachgoers to help them count the number of horseshoe crabs they come across.

Horseshoe crabs mate throughout the year, but FWC officials say they are commonly seen along the beach shores during the springtime. They are easier to spot around high tide, within a few days of a new or full moon.

To identify mating pairs, marine biologists say to look for a smaller male on top of a larger female.

Reporting them helps biologists with information about the species’ habitat use, population distribution, and environmental conditions, they said. Citizens have been reported horseshoe crab sightings to FWC for nearly 15 years.

They’ve been around for 450 million years, but FWC says they are still learning about their populations in the Sunshine State. Their numbers have declined in recent decades due to overfishing and loss of habitat.

The FWC advises that if you see a horseshoe crab on its back, gently pick it up while holding both sides of the shell, and release it back into the water. They said simple actions like this help conserve the species and countless other species that depend on it.

Horseshoe crab sightings can be reported through a survey on FWC’s website or the FWC Reporter app – which is free to download on Apple and Android phones. You can also send an email to Horseshoe@MyFWC.com or call 866-252-9326 to report sightings.