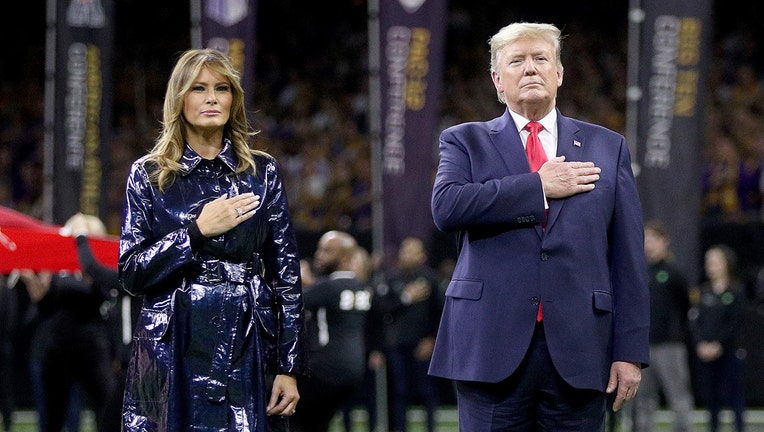 First Lady Melania Trump and U.S. President Donald Trump during the National Athem prior to the College Football Playoff National Championship game between the Clemson Tigers and the LSU Tigers at Mercedes Benz Superdome on January 13, 2020 in New Or (Chris Graythen/Getty Images)

NEW ORLEANS - President Donald Trump turned sports fan for an evening as he watched No. 1 Louisiana State University and No. 3 Clemson battle it out in the College Football Playoff championship.

Trump flew to Louisiana for Monday’s night’s game at the Superdome in New Orleans, accompanied by first lady Melania Trump.

“It’ll be a great game. It’ll be something that a lot of people want to see,” he said as the couple departed the White House.

The president and first lady walked onto the field shortly before the game for the singing of the National Anthem. Fans from both teams cheered him loudly. Some greeted him with cheers of “USA, USA.” Others chanted, “Four more years.”

The first couple left before the fourth quarter and the final score: LSU 42, Clemson 25.

Trump was in friendly territory. He secured a nearly 20-point victory in Louisiana in the 2016 presidential election.

Trump is also familiar with the two teams. He took in an LSU game in November when the team went up against Alabama.

He also met with many of Clemson’s coaches and players when they visited the White House in January 2019 after winning last season’s national championship. That visit occurred during a partial government shutdown. With much of the White House staff on furlough, Trump arranged for a fast food buffet of burgers and pizza. White House cups bearing the presidential seal held the fries.

Monday’s game featuring two undefeated teams offered Trump a brief break from another turbulent period in his presidency as House Speaker Nancy Pelosi prepares to send two articles of impeachment to the Senate and tensions between the U.S. and Iran continue to simmer.

Sen. Lindsey Graham, R-S.C., who predicted a championship for Clemson, flew with Trump aboard Air Force One to Louisiana for the game. Graham is an outspoken supporter of Trump who opposes the president’s impeachment. Sen. Tim Scott, R-S.C., also hitched a ride to the game.

While Trump has routinely sparred with professional athletes during his time in office, college football has managed to avoid similar political controversies.

The president attended the Army-Navy football game last month and was warmly welcomed at the LSU-Alabama game. 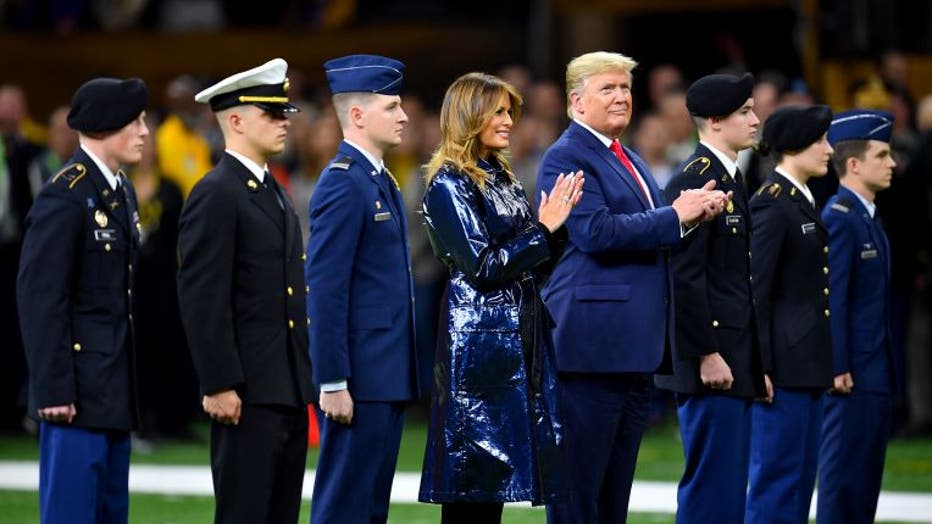 “Regardless of your political views, that’s pretty cool, having the president at the game,” LSU quarterback Joe Burrow said at the time.

Trump drew a mixed response last fall when taking in a mixed martial arts match in New York City. He also was jeered and booed at a World Series game in Washington.