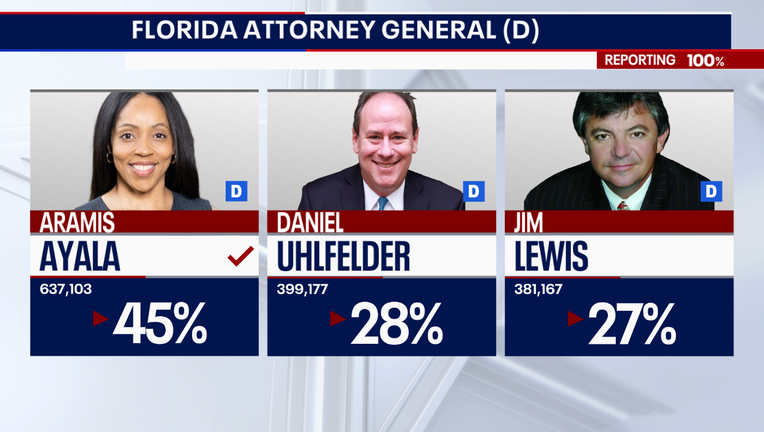 FORT LAUDERDALE, Fla. - Aramis Ayala, a former state attorney punished by the governor when she refused to seek the death penalty in murder cases, emerged Tuesday from a three-way primary to become the Democratic challenger to Republican Attorney General Ashley Moody.

Meanwhile, Naomi Blemur of North Miami was atop a three-way Democratic battle for agriculture commissioner and will run against Senate President Wilton Simpson, R-Trilby, in the November general election for the Cabinet post.

In addition to Ayala and Blemur, the Democratic Cabinet slate will include former state Rep. Adam Hattersley running for state chief financial officer. Moody and Republican Chief Financial Officer Jimmy Patronis did not have primary opponents.

Ayala in 2016 became the first elected Black state attorney in Florida, winning in the 9th Judicial Circuit in Orange and Osceola counties. But before her four-year term was up, she became a target for Republicans because she announced she would not seek the death penalty for convicted murderers. Then-Gov. Rick Scott, now a U.S. senator, removed those cases from her office.

In a statement Tuesday night, Ayala said she will "make the case that Ashley Moody has failed on the most fundamental aspects of being attorney general."

"As a result of Ashley Moody’s failures, Floridians are less free and less safe," Ayala said in a prepared statement. "We have seen many of our basic rights eroded, violent crime on the rise, and corporate interests earning more profits at the expense of Floridians having the basic essentials for survival. Ashley Moody is anything but the people’s lawyer, and I refuse to stand silent as our rights and freedoms are trampled upon."

As of 10 p.m. Tuesday, Ayala had captured about 44.7 percent of the vote, while Santa Rosa Beach attorney Daniel Uhlfelder had received about 28.2 percent and Fort Lauderdale attorney Jim Lewis had received about 27.1 percent, according to the state Division of Elections website.

Uhlfelder has drawn national attention for dressing as the Grim Reaper to criticize Gov. Ron DeSantis’ handling of the COVID-19 pandemic.

Like Patronis and Moody, Hattersley did not have a primary opponent. Hattersley served one term in the Florida House before an unsuccessful run for Congress in 2020.

All three Republicans, who have been endorsed by former President Donald Trump, begin the general election cycle with far more money and visibility than their Democratic challengers.

Simpson, one of the wealthiest members of the Legislature whose businesses include a giant egg farm, had little trouble winning a GOP primary Tuesday against James Shaw, a Vero Beach resident.

Blemur emerged from the Democratic primary for agriculture commissioner after losing endorsements over past social-media posts that critics deemed "homophobic" and "anti-choice." She defeated J.R. Gaillot of Gainesville and Ryan Morales of Clermont in the primary.

Simpson said the next 77 days will be used to "draw a clear contrast between the common-sense conservatism that has made the free state of Florida a model for the nation, and our opponent’s allegiance to the failed socialist policies of Washington Democrats."

Agriculture Commissioner Nikki Fried, who has been the only statewide elected Democrat, decided against running for re-election to campaign for governor. She lost the gubernatorial primary Tuesday to U.S. Rep. Charlie Crist.

All three Democrats running for Cabinet posts will have to quickly scratch for money, as it remains unclear how much support they will receive from state and national party organizations.