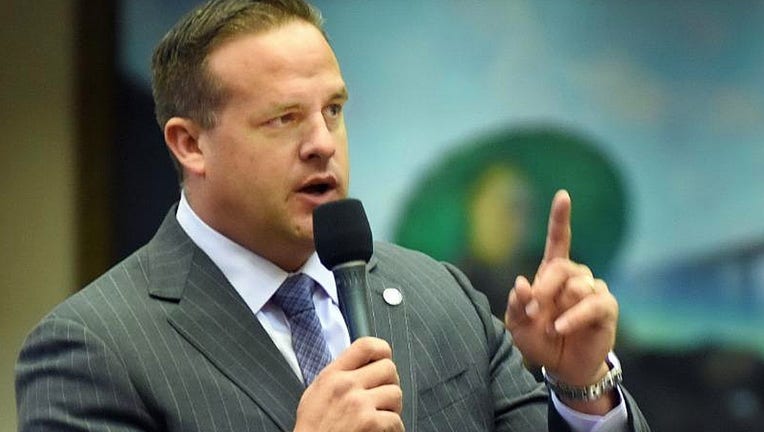 TALLAHASSEE, Fla. - The Miami-Dade County state attorney has charged former Florida Sen. Frank Artiles with election fraud for allegedly propping up a sham candidate in a razor-thin Senate contest in which an incumbent Democrat was ousted by a Republican challenger in November.

Artiles is accused of using a third-party candidate to "confuse voters and siphon votes" from former Sen. Javier Jose Rodriguez, a Miami Democrat who wound up losing to Republican Ileana Garcia by 32 votes.

State Attorney Katherine Fernandez Rundle accused Artiles --- who was forced to resign from the Senate in 2017 ---of paying Alex Rodriguez nearly $45,000 to run as an independent candidate and confuse voters in the race between Jose Javier Rodriguez and Garcia.

Alex Rodriguez received more than 6,000 votes in the Senate District 37 race but did not actively campaign for the seat.

Rundle stressed Thursday that her office has "no indication" Garcia was involved in Artiles’ alleged plot.

According to an arrest affidavit, Artiles, a Republican, orchestrated what Rundle called a "ghost campaign" to oust the Democratic senator.

"Running a ghost candidate" is not a crime, however, Rundle said.

"Is it an attack on our democracy? Is it a dirty political trick? Absolutely," she said. "What is a crime is making illegal campaign contributions to get a candidate to run. … Sadly, Frank Artiles knew he could manipulate Florida’s election system."

Alex Rodriguez, who was also charged with three felonies related to the election scheme, confessed after being approached by investigators in December, according to the affidavit released by Rundle’s office Thursday.

Artiles, a tough-talking U.S. Marine veteran whose brash demeanor earned him the moniker "Frank the Tank" during his tenure in the Legislature, stepped down from the Senate in 2017 after a profanity-laced tirade at a private club.

The affidavit said Artiles contacted Alex Rodriguez, who had moved to Boca Raton, in May and offered to pay him to run in the Miami-Dade County Senate race. Fernandez said Alex Rodriguez was experiencing "dire financial difficulties" at the time.

"Artiles allegedly discussed a, ‘You help me, and I can help you’ scenario," Rundle said.

The affidavit, which includes numerous text messages between Alex Rodriguez and Artiles, also alleges that the pair met at Artiles’ Palmetto Bay home, where Artiles offered to pay Alex Rodriguez $50,000 --- half before the November election and half after --- to run as a candidate with no party affiliation in the District 37 race. Artiles knew that Alex Rodriguez did not live in the district, according to the affidavit.

"According to Rodriguez, Artiles explained that the strategy was simple. Rodriguez would run as an independent candidate with the same last name as the incumbent candidate (Jose Javier Rodriguez) in an attempt to confuse voters and siphon votes from the incumbent," the affidavit signed by Eutimio Cepero, an investigator with Rundle’s office, said.

Artiles in June gave Alex Rodriguez the paperwork to file as a candidate, instructed him to use an old Palmetto Bay address that was still on his driver’s license and gave him $2,000 to open a campaign bank account. After the account was opened, Artiles told Alex Rodriguez he needed to rush to Tallahassee to file the paperwork with the state Division of Elections.

On several occasions, Alex Rodriguez asked Artiles for money, and Artiles gave him between $3,000 and $5,000. Artiles took the money from a safe in his office and asked for 30 percent of whatever profit Alex Rodriguez made from the deal.

Artiles kept records of the money he gave to Alex Rodriguez "on a piece of paper that he kept in a ledger on his desk" that both men initialed.

One time, Alex Rodriguez asked Artiles to pay for his child’s Catholic school tuition. Artiles paid $6,798.39 to the school using his credit card.

Alex Rodriguez, who knew Artiles for about 20 years, and Artiles also allegedly tried to put together a business deal for personal protective equipment, according to the affidavit.

"No deal ever came to fruition," it says.

Alex Rodriguez "deeply regrets allowing himself to be used in this way and hopes that by coming forth with the truth he can help to right these wrongs," his lawyer William Barzee said in an email.

"Frank Artiles and his co-conspirators knew they couldn’t beat Jose Javier Rodriguez in a fair election so they rigged it. Artiles cynically targeted and used a vulnerable ‘friend’ with a great name to run in the race in order to confuse voters and steal the election," Barzee said.

TRENDING: Will Publix give you a leftover vaccine if you come at the end of the night?

Artiles paid Alex Rodriguez more than $55,000, with all but $10,900 attributable to the candidacy, according to the affidavit.

The District 37 race was among a handful of high profile competitive Senate races last year. Democrats had hoped to pick up three seats, but Garcia’s victory caused a loss of one seat.

Senate President Wilton Simpson, who was in charge of GOP Senate campaigns for the 2020 election cycle, said Thursday that "we don’t have all the facts" in the Artiles case yet.

"Going backwards, it's really easy to say, well, maybe we should have looked into these things," Simpson, R-Trilby, told reporters.

Fraud "has not been proven yet," the Senate president said, noting that Rundle had emphasized that Garcia was not involved.

Artiles, who served three terms in the Florida House, joined the Florida Senate after defeating a Democrat in a bitter election in 2016.

But just months into his Senate term, Artiles was forced to resign amid a Senate investigation into reports that he had insulted two black colleagues, and others, at a members-only club in the shadow of the Capitol.

Tune in to FOX 35 Orlando for the latest headlines.