POZZILI, Italy - Spicing up your cooking might actually help save your life — a new Italian study suggests that regularly consuming chili peppers can significantly reduce the risk of death from heart disease and stroke.

The therapeutic benefits of capsaicin, the component of chili peppers that makes them spicy, have been touted in folk medicine for centuries, but studying these benefits in a lab is relatively new.

"The chili pepper is a fundamental component of our food culture," said Licia Iacoviello, director of the Department of Epidemiology and Prevention of the IRCCS Neuromed and Professor of Hygiene and Public Health at Insubria. "Over the centuries it has been given properties of all kinds, most often based on anecdotes or customs. It is important now that the research deals with it in a concrete way, with rigor and scientific evidence. As already observed in China and the United States, the various plants of the capsicum species, although consumed in different ways throughout the world, can exert a protective action towards our health." 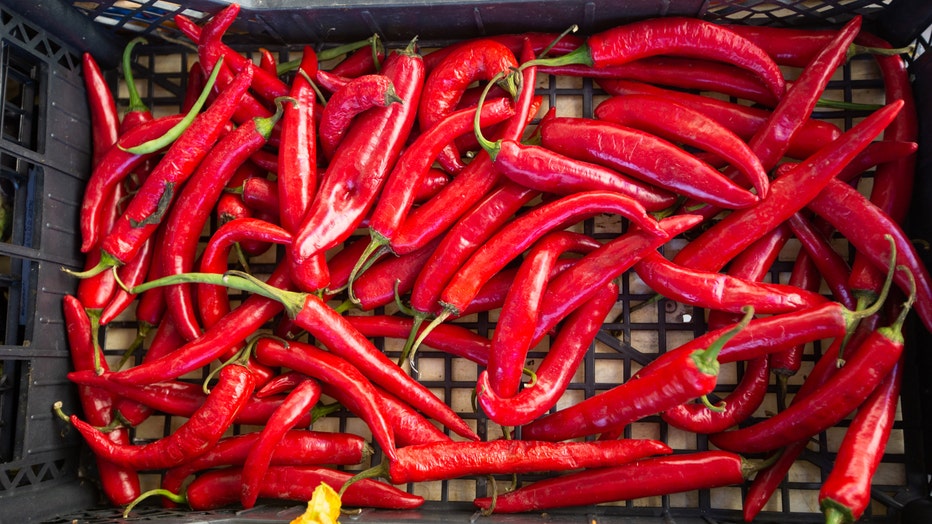 A carton with red chillis for sale at the annual 'Ue Sbarassue,' held in the center of Chivari (GE), Ligury, Italy. (Alexander Pohl/NurPhoto via Getty Images)

Researchers used data from the Moli-sani study, a general population-based cohort study that involved 25,000 people from the Molise region of Italy who were recruited between 2005 and 2010. Participants’ health status and eating habits were monitored and analyzed over the course of eight years.

In the new study, researchers pulled the health and eating habit data of 22,811 participants in the Moli-sani study.

The kind of diet that each participant consumed — whether it was healthy or not — didn’t have much of an effect on the results.

“An interesting fact is that protection from mortality risk was independent of the type of diet people followed," Marialaura Bonaccio, lead study author and an epidemiologist at the Mediterranean Neurological Institute (Neuromed), told CNN. "In other words, someone can follow the healthy Mediterranean diet, someone else can eat less healthily, but for all of them chili pepper has a protective effect."

Some scientists warn that there are limitations to the study that may muddy the results a bit — for example, people who live in the Molise region who cook with a lot of chili pepper may also cook with a lot of other spices, and perhaps the positive health effects are the result of a more robust spice intake.

The research team behind the study now plans to investigate the underlying biochemical mechanisms that could be causing chili peppers to boost good health.