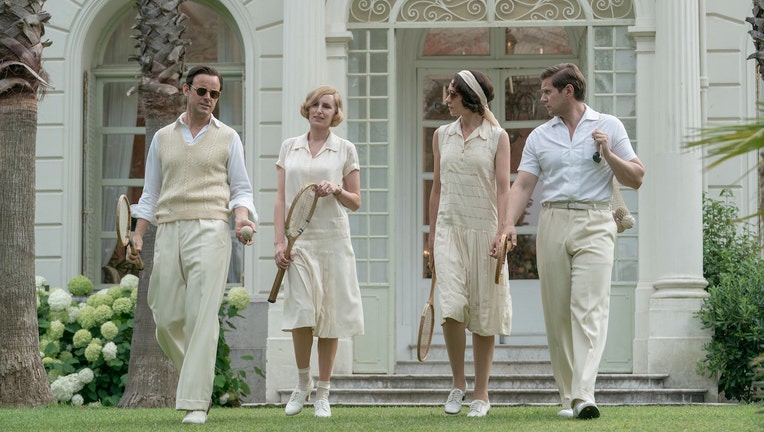 Chicago - Editor's note: This review originally ran on May 20, 2022 as "Downton Abbey: A New Era" hit theaters. It has been republished in light of the film's recent premiere on Peacock.

Looking back, the first "Downton Abbey" movie was a bit of a test run for writer/creator Julian Fellowes. Expanding a beloved TV show with a massive ensemble into a streamlined big screen story is no easy feat — as the pleasant but thin first film demonstrated. This time around, however, Fellowes comes closer to getting the balance right.

"Downton Abbey: A New Era" is still very much a "for fans only" affair; one that throws viewers right back into the deep end when it comes to the soapy lives of the Crawley family and their loyal servants. But "A New Era" is both more focused and more substantial than the first film, which makes it especially satisfying to step back into its cozily rose-colored, slightly ridiculous take on early 20th century England.

Perhaps a different perspective is key. While the first film was helmed by American TV director Michael Engler, who directed a few episodes of the series, this latest installment comes from British director Simon Curtis ("My Week with Marilyn," "Woman in Gold"), who brings a better sense of balance to the proceedings. Though the big screen iteration of "Downton" continues to be a bit more broadly cartoonish than its original ITV/PBS run — largely to its detriment — Curtis prioritizes gentle nostalgia as well. 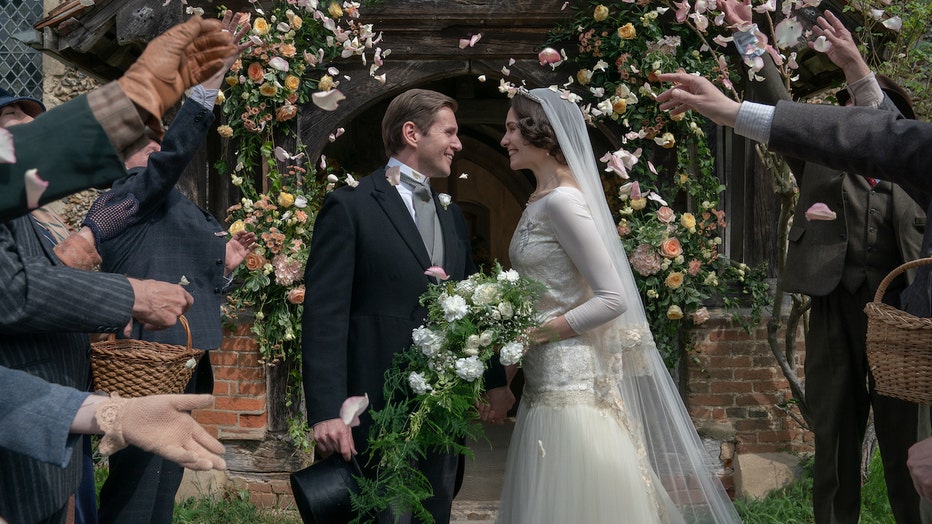 The film opens on the wedding of Crawley son-in-law Tom Branson (Allen Leech) and his new love interest Lucy (Tuppence Middleton), who was introduced in the last film. Their church pews are filled with servants and aristocrats alike as Curtis’ camera wanders down the aisle, creating a visual receiving line of the show’s massive ensemble. And isn’t it nice to see all our old friends decked out in their wedding best?

Indeed, it’s pleasantries rather than plot that are the name of the game here. Rather than pick up any particular storyline from the first film, "A New Era" introduces two new episodic adventures to keep its characters busy. One half of the ensemble sets sail for the South of France to investigate a mysterious villa that has recently been left to aging family matriarch Violet, the Dowager Countess (Maggie Smith). Meanwhile, the other half stays at home to host a film crew who are willing to pay a hefty sum to shoot at Downton.

WATCH FREE ON TUBI: "My Week with Marilyn" — get the app 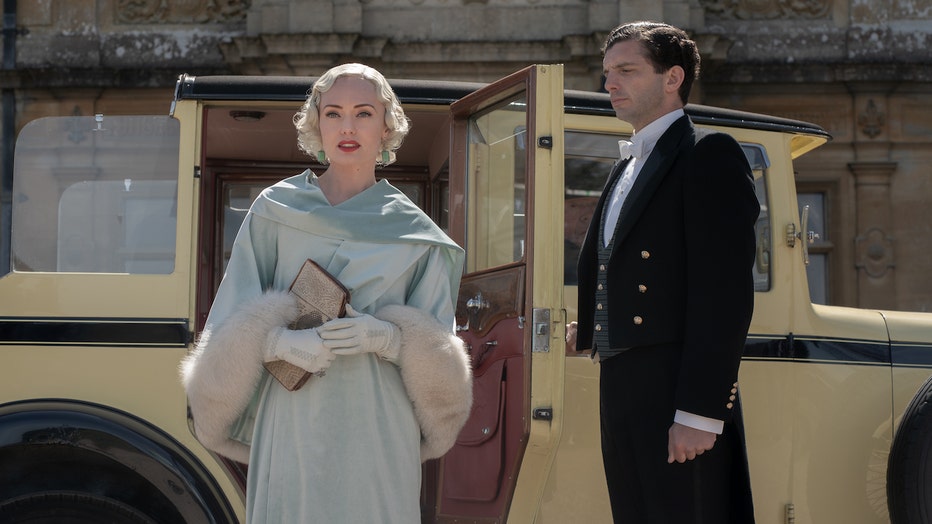 Both storylines offer an excuse for "A New Era" to highlight some of the glitz and glam of late 1920s life — as talkies take over the film industry and summering in France becomes trendy. Plus they introduce a few new characters into the fold, including a wealthy French mother/son duo (Nathalie Baye and Jonathan Zaccaï) and some Hollywood visitors deliciously played by Hugh Dancy, Dominic West and Laura Haddock.

But thankfully "A New Era" doesn’t let those new faces overwhelm the original cast, which was one of the problems with the first film. Instead, just about all of the original players get something to do here, from the sweet will-they-won’t-they romance between Miss Baxter (Raquel Cassidy) and Mr. Molesley (Kevin Doyle) to the simmering ennui of Lady Mary (Michelle Dockery). And though much of "A New Era" is as fizzy as a summer cocktail, Violet’s declining health provides a ticking time clock that gives the frothy story some emotional heft as well.

See "Downton Abbey: A New Era" for: My, my, just how much we've missed you

There are flaws here too, to be sure, even by "Downton" standards. Though Robert James-Collier’s scheming-footman-turned-loyal-butler Thomas Barrow nearly stole the first film with a moving storyline about queer discovery, he gets an overly rushed arc this time around, which is disappointing.

WATCH FREE ON TUBI: Maggie Smith and Judi Dench in "Ladies in Lavender" — get the app

But while the first film largely petered out in its climax, "A New Era" gets better as it goes along, as its lighthearted throughlines give way to a surprisingly poignant celebration of the show’s legacy. The power of any long-running franchise comes from how much time its viewers have spent living with its characters. And "A New Era" has a long memory that will be particularly rewarding for long-time fans — whether that’s in scenes of Tom discussing his late wife Sybil or Violet and Isobel (Penelope Wilton) hashing out their winding path from sparring partners to genuine friends. 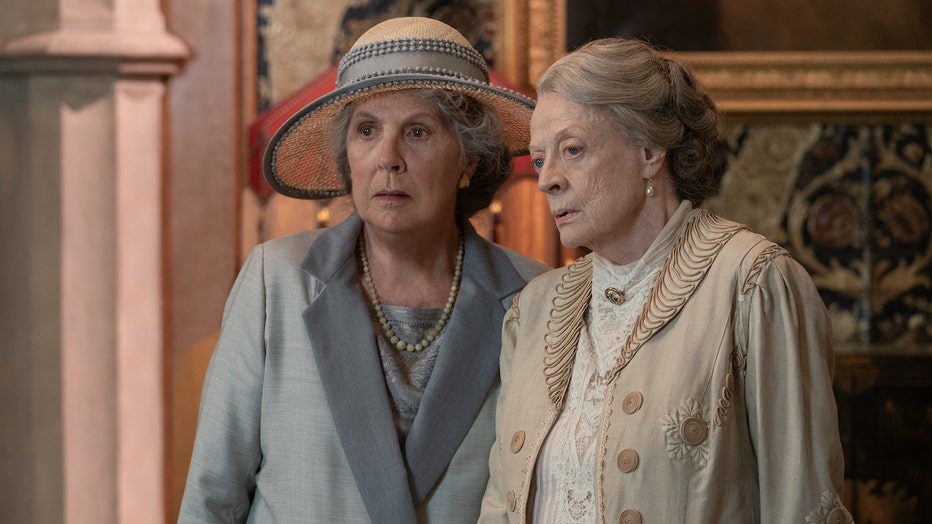 In fact, you may even shed a tear or two as the Crawleys reflect on those they’ve loved and lost over the years, while noting that the power of family lineage comes from the way it carries on even as individual members come and go — a theme that speaks to both aristocracy and long-running franchises alike.

Sense and Sensibility (1995): Other than William Shakespeare, there’s no one more influential on the modern day romantic comedy genre than Jane Austen. And the early 19th century novelist gets one of her best-ever adaptations in this winning romance from director Ang Lee and writer/star Emma Thompson. With its classic story of polar opposite sisters — the reserved, responsible Elinor (Thompson) and the expressive, emotional Marianne (Kate Winslet) — "Sense and Sensibility" basically delivers two rom-com storylines in one. So whether your dream is to hit it off with a charmingly humble Hugh Grant or get stuck in a dramatic love triangle with Greg Wise and Alan Rickman, there’s something for everyone here. Rated PG-13. 136 minutes. Dir: Ang Lee. Streaming for free on Tubi.

Where is "Downton Abbey: A New Era" streaming?

"Downton Abbey: A New Era" is now streaming on Peacock for subscribers with a premium membership ($6.99/month, $49.99/year). It's also available for purchase through various V.O.D. (Video On Demand) services.