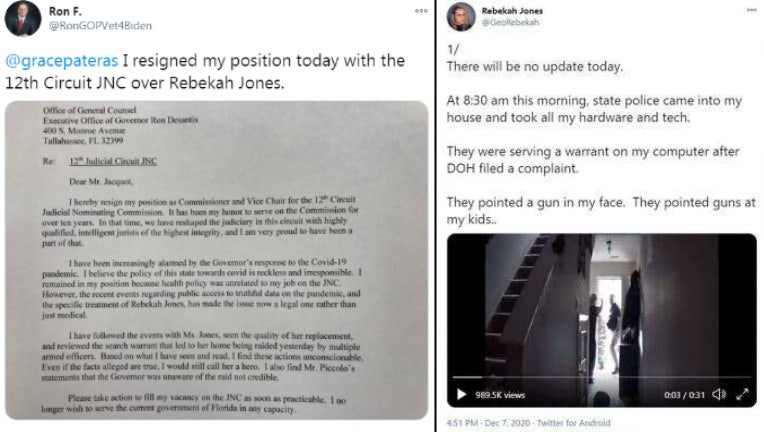 TALLAHASSEE, Fla. - A man appointed to a commission that recommends judicial appointments to Florida Gov. Ron DeSantis has resigned citing the search warrant served on a former Department of Health employee who has criticized the state's COVID-19 data.

Ron Filipowski announced his resignation from the 12th Circuit Judicial Nomination Commission on Twitter on Tuesday, saying a raid at the home of Rebekah Jones was unconscionable.

Agents with the Florida Department of Law Enforcement served the search warrant Monday, saying a computer at Jones's home was used to hack the Department of Health. Jones refused to let agents in for 20 minutes, the department said.

When she did open the door, a camera set up inside Jones's home filmed the agents as they entered. She released the video on Twitter, though it only shows the first 31 seconds of the raid.

Jones was fired in May. State records show she repeatedly violated department policy by speaking to the media without permission. She has questioned the state COVID-19 dashboard that she helped create and has since created her own.

Filipowski, a Republican, has been a vocal opponent of President Donald Trump, who is a close DeSantis ally. He served on the commission that recommends judicial nominees for Sarasota, Manatee and Desoto counties.

“I no longer wish to serve the current government of Florida in any capacity,” Filipowski said in his resignation letter.

The governor's office didn't immediately comment on the resignation.