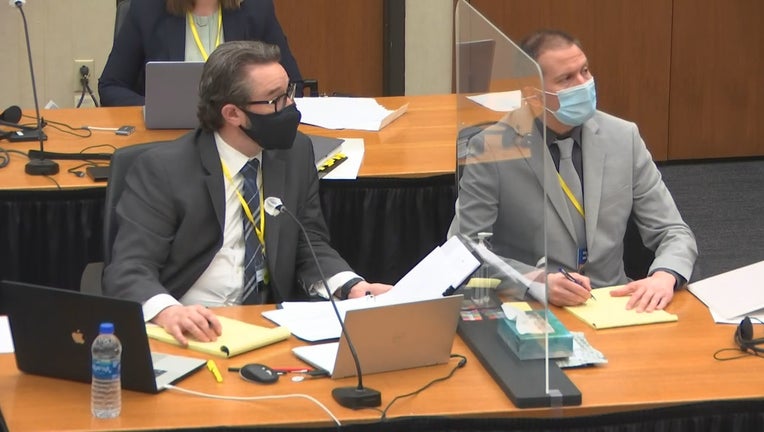 Defense attorney Eric Nelson (left) sits with Derek Chauvin (right) who is charged in the death of George Floyd.

MINNEAPOLIS (FOX 9) - Derek Chauvin’s attorney filed a motion asking the court to throw out his guilty verdicts and schedule a new trial Tuesday.

The filing, made by Attorney Eric Nelson, cites jury intimidation and a failure of the court to sequester the jury as some of the reasons he is asking for a new trial.

Derek Chauvin has been found guilty on all counts in the death of George Floyd.

The filing claims the jury was exposed to "prejudicial publicity" about the trial and says "jury intimidation" and "potential fear of retribution" also violated Chauvin’s right to a fair trial.

Nelson also took aim at the state’s prosecutors, accusing them of misconduct. He argues they disparaged the defense and failed to prepare its witnesses among other things.

Nelson goes on to argue for a new trial because the court did not order a record of the sidebars be made, did not give the jury adequate instructions and did not order witness Morries Hall to testify during the trial, the filing says.

Nelson asked for a hearing to "impeach the verdict" in this case on the grounds that, "the jury committed misconduct, felt threatened or intimidated, felt race-based pressure during the proceedings, and/or failed to adhere to instructions during deliberations, in violation of Mr. Chauvin’s constitutional rights to due process and a fair trial."

In a statement to FOX 9 Tuesday, a spokesperson for the state Attorney General said, "The court has already rejected many of these arguments and the State will vigorously oppose them."

This motion from the defense was expected before Chauvin’s scheduled sentencing in June.

This is a developing story. Check back in to FOX 9 for the latest.