A 22-year-old Deltona man is facing eight felony charges after tackling a deputy during a violent fight, according to the Volusia County Sheriff's Office. The alleged fight started when the suspect’s girlfriend said she saw him forcibly kiss his 16-year-old stepsister.

DELTONA, Fla. - A 22-year-old Deltona man is facing eight felony charges after tackling a deputy during a violent fight, according to the Volusia County Sheriff's Office. The alleged fight started when the suspect’s girlfriend said she saw him forcibly kiss his 16-year-old stepsister.

Investigators said the incident happened on March 29, which also happened to be the birthday of the suspect, Russell Slimon.  A family member dialed 911 after the fight broke out.

"My stepdad is pulling a gun out on him. I’m scared ma’am. Please help me," said the caller.

Deputies drove up on the chaotic scene on Babcock Avenue where they found Slimon on the ground fighting another male.

"Hey everybody get on the ground now!" shouted the deputy.

The audio captured on his body camera.  The deputy with his taser drawn appears to have the fight broken up when Slimon charges the officer

"It never had to happen," said Glenn Ford.

Ford still has bruises on his face and two fractured ribs from the fight with his step-son. He said it all started when he asked Russell to leave after Russell forcibly grabbed and kissed his stepsister. 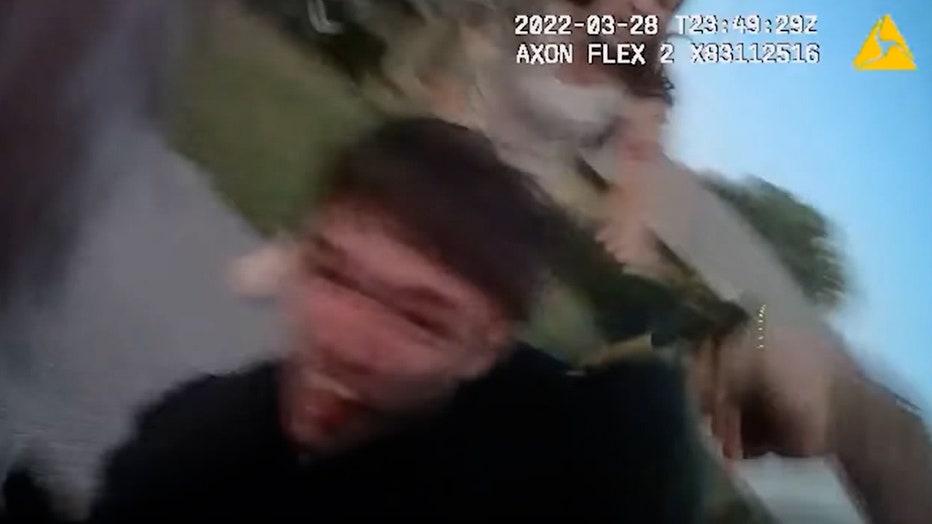 "He grabbed the dog leash. I was sitting at the table like you saw me. He came behind me, pushed his mom out of the way, wrapped a leash around my neck, pulled me off the chair and started strangling me right there on the ground," said Ford.

Ford said he started to black out

"I thought I was going to die," said Ford.

The incident report states Russell also tried to "strangle" his mother when she tied to intervene. Ford said he got up and grabbed his shotgun which led the fight outside.

"He almost got shot here, and he almost got shot again and the cop told my wife he had every right to put him in his place with a gun because he was being strangled from behind," said Ford.

Glenn hopes this incident gets his step-son the help he needs but in the meantime he is not allowed back at their home.