The possible megalodon tooth was found during a three-week Ocean Exploration Trust expedition to explore the deep-sea biology and geology of the Johnston Unit of the Pacific Remote Islands Marine National Monument about 150 miles south of Johnston Atoll. (FOX Weather)

Researchers say they have discovered a massive shark tooth believed to have belonged to the largest shark to have ever lived – the infamous and extinct megalodon.

The tooth was found in June during a three-week Ocean Exploration Trust expedition to explore the deep-sea biology and geology of the Johnston Unit of the Pacific Remote Islands Marine National Monument about 150 miles south of Johnston Atoll. The island is an unincorporated territory of the U.S. located in the Pacific Ocean several hundred miles southwest of Hawaii and is currently administered by the United States Fish and Wildlife Service. 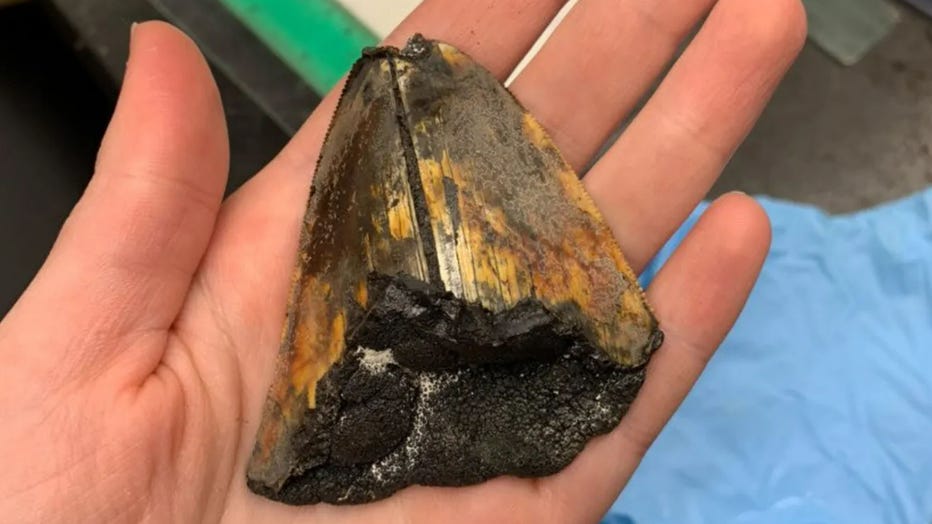 The team was sampling ferromanganese-coated rocks situated more than 10,000 feet below sea level using a remotely operated vehicle on a never-before-surveyed seamount.

Only time will tell if the tooth is indeed that of a megalodon. It was sent off for further lab analysis at the University of Rhode Island Marine Geological Samples Laboratory to confirm, the Ocean Exploration Trust said.

The megalodon was once the most fearsome predator to reign the seas, according to the Smithsonian Institution. The ancient shark lived roughly 23 to 3.6 million years ago. Its size reached more than three times longer than today's great white shark.

Ocean Exploration Trust was founded in 2008 by Dr. Robert Ballard to engage in ocean exploration aboard Nautilus, a 210-foot research vessel.