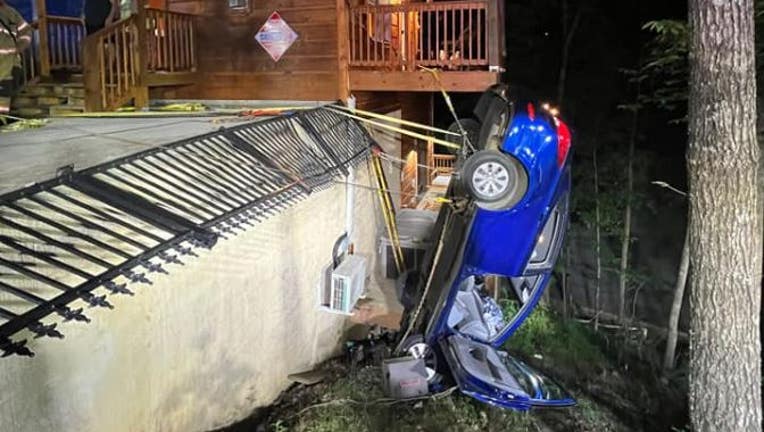 The vehicle is pictured dangling over an embankment on June 18, 2021, near Pigeon Forge, Tennessee. (Credit: City of Pigeon Forge Fire Department)

PIGEON FORGE, Tenn. - A driver and a dog were safely rescued from a vehicle that went over an embankment in Tennessee, resulting in a complicated rescue by firefighters to stabilize the vehicle that landed in a precarious spot.

The incident was reported just before 1:45 a.m. ET on Saturday in Pigeon Forge, a mountain town and vacation area located in eastern Tennessee. The local fire department posted about the rescue on its Facebook page, saying that the overnight shift received a call for "a vehicle over an embankment."

"Upon arrival, they found the vehicle in this position, and had to stabilize it in order to conduct an extrication that lasted over an hour," the Pigeon Forge Fire Department wrote.

The fire department shared photos of the scene, which shows a blue vehicle in a vertical position with its front bumper on the ground. The vehicle crashed outside what appears to be lodging located on the side of a steep hill.

The vehicle is pictured dangling over an embankment on June 18, 2021, near Pigeon Forge, Tennessee. (Credit: City of Pigeon Forge Fire Department)

Responding firefighters secured the vehicle by using the foundation of the nearby structure, connecting heavy-duty straps and chains to the vehicle, and wrapping them through the home’s door and window. 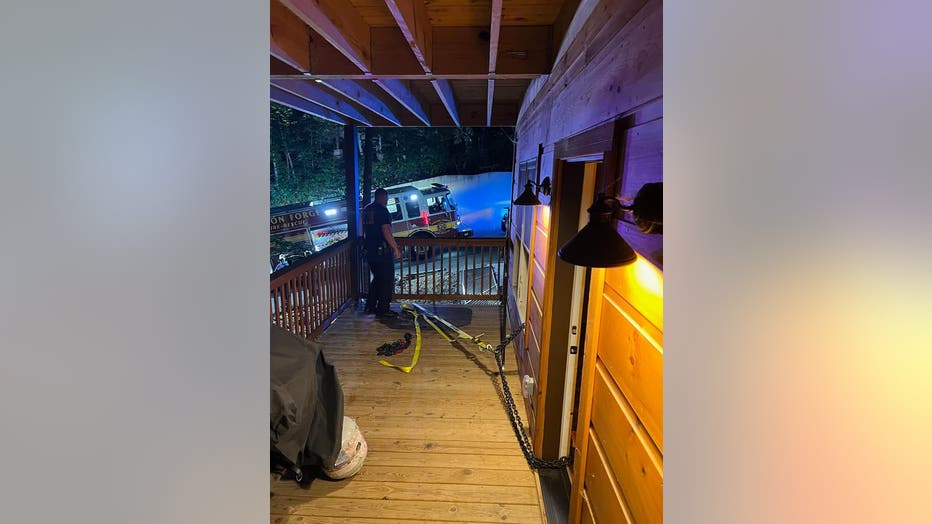 "You may ask what it's like to be a firefighter? Well, in the middle of the night while everyone else sleeps, we perform our best work, within minutes of receiving an alarm," the department wrote on Facebook.

"Imagine waking up at 1:41 am and immediately having to make quick decisions that someone else's life depends on," it added.

The driver of the vehicle and a dog were "safely rescued," officials said.

Earlier this month, a mother and her three children were rescued from a car that crashed in Oregon and was left teetering on the edge of an embankment.

Authorities said the mother was driving on June 8 when she veered off of a highway. Josh Frazier, a worker with the Oregon Department of Transportation, was nearby and saw that the car was about to fall over the edge.

Frazier jumped into action, pulling his ODOT truck close, and secured the car with a winch cable. He then punched out the windshield and carried two of the children up the hill while additional first responders helped rescue the others and provided medical care.

"It's one of those action hero movie tropes: a car, teetering on the edge of an embankment, when the hero saves the day by rescuing the vehicle's occupants. Predictable by movie standards, but extraordinary in real life," ODOT later wrote in a Facebook post about the incident.

"On what was likely one of these travelers' worst days, we're glad Josh was at his best," it added.

RELATED: Biden signs off on hefty pay raise for federal firefighters through 2023