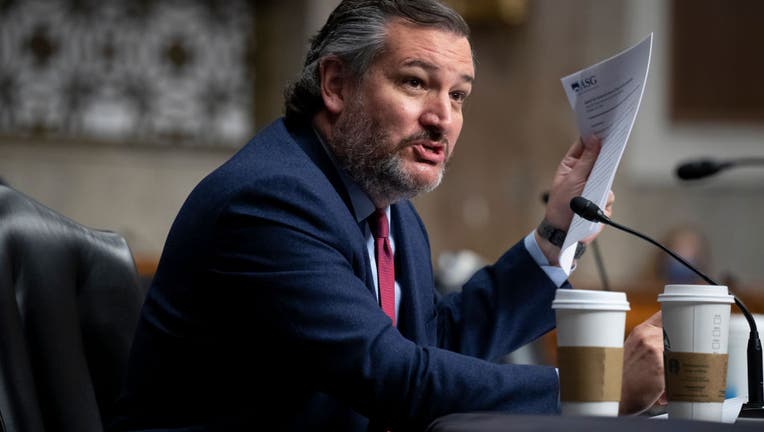 FILE - Sen. Ted Cruz, R-Texas, speaks during the Senate Foreign Relations Committee hearing on the nomination of Linda Thomas-Greenfield to be the United States Ambassador to the United Nations, on Capitol Hill on Jan. 27, 2021 in Washington, D.C. (P

U.S. Sen. Ted Cruz admitted Thursday that traveling to Cancun, Mexico, as his constituents in Texas suffered in freezing homes amid power outages was "obviously a mistake."

The Republican spoke outside his home as a group of protesters chanted just yards away. The crowd, equipped with signs and megaphones.

"Ted Cruz has got to go!" they chanted. The protest drew a sizable police presence.

"In hindsight, I wouldn’t have done it," Cruz told reporters. "I was trying to be a dad and all of us have made decisions, when you have two girls who have been cold for two days and haven’t had heat or power and they’re saying, ‘Hey look, we don’t have school, let’s get out of here.'

"I think there are a lot of parents that would be like, 'If I can do this, great.' That’s what I wanted to do. As I said, really from the moment I sat on the plane, I began really second-guessing that decision."

Videos and photos of Cruz and his wife, Heidi, boarding the plane to Mexico first surfaced on social media on Wednesday evening. Prominent Democrats lashed out at Cruz hours after it was revealed that he had traveled to Mexico as his home state contended with a catastrophic winter storm.

Cruz noted that he "intended to work remotely" during the trip. When asked if he always planned to fly back to Texas on Thursday or if he cut the vacation short due to the political backlash, the senator did not directly respond.

"As it became a bigger and bigger firestorm, it became all the more compelling that I needed to come back because our priority should be fixing this problem and making sure it doesn’t happen again," Cruz added. "I didn’t want all the screaming and yelling about this trip to distract even one moment from the real issues that I think Texans care about, which is keeping all our families safe."

Critics accused the senator of fleeing his state amid wintry conditions that contributed to a mounting death toll and left millions without power or access to running water. Texas Democratic Party Chairman Gilberto Hinojosa called Cruz’s actions "deeply disturbing and disappointing" and demanded that he step down.

In a lengthy statement released earlier Thursday, Cruz acknowledged that he traveled to Mexico and said that he did so in order to accompany his daughters.

"With school canceled for the week, our girls asked to take a trip with friends," he said. "Wanting to be a good dad, I flew down with them last night and am flying back this afternoon. My staff and I are in constant communication with state and local leaders to get to the bottom of what happened in Texas. We want our power back, our water on, and our homes warm. My team and I will continue using all our resources to keep Texans informed and safe."

The incident marked a potentially damaging political setback for Cruz, a former presidential candidate who is considered a likely competitor for the GOP’s nomination in 2024.