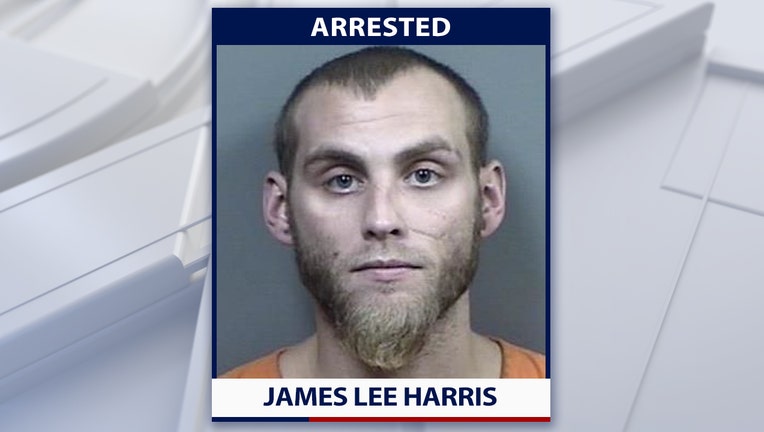 Deputies and Citrus County Fire Rescue say they were called to a brush fire at the Our Lady of Grace Catholic Church located at 6 Roosevelt Boulevard in Beverly Hills around 7 a.m.

A witness told first responders that he saw a white man wearing a leather jacket and tan running shorts run across the parking lot toward the front of the church. He said he then saw the man pour liquid out of a gas can around a tree and a statue of Jesus Christ and set both on fire.

Deputies on the scene checked the church's surveillance cameras and saw a man matching the description given by the witness. The video showed the same suspect also trying to light propane tanks near the building on fire.

While deputies were at the church, the Citrus County Sheriff's Office received several calls about a man setting structures on fire.

One caller lived off South Barbour Street in Beverly Hills and said a fence on their property was set on fire. The homeowner also stated that their front door and windows were covered in a liquid, which may have been gasoline.

First responders were also sent to a third location on South Wadsworth Avenue in Beverly Hills, where fire rescue crews saw flames coming from an open window. The team put the fire out, but it caused major damage to the home, which was vacant at the time.

Using surveillance video from the church, detectives quickly identified Harris as a person of interest in the three arson cases and took him into custody shortly before 10 p.m.

"Not only is arson dangerous, but in some cases can be deadly," said Sheriff Mike Prendergast. "No one in our community was injured during Harris' tirade of inconceivable acts. I applaud our deputies, Community Crimes Detectives, and our partners at Citrus County Fire Rescue for working swiftly and diligently to keep our community safe from further harm. I would also like to thank our witnesses for coming forward so quickly with invaluable information that helped us solve this crime."

Detectives say Harris confessed to the crimes after being read his Miranda Rights.

Harris is currently being held at the Citrus County Detention Facility on a $36,000 bond.