A China Eastern Boeing 737-800 with 132 people on board crashed in the southern province of Guangxi, according to officials said. There was no immediate word on numbers of dead and injured. The plane was carrying 123 passengers and nine crew members. The flight was traveling from Kunming in the western province of Yunnan to the industrial center of Guangzhou along the east coast.

WUZHOU, China - Mud-stained wallets. Bank cards. Official identity cards. Poignant reminders of 132 lives presumed lost were lined up by rescue workers scouring a remote Chinese mountainside Tuesday for the wreckage of a China Eastern flight that one day earlier inexplicably fell from the sky and burst into a huge fireball.

No survivors have been found among the 123 passengers and nine crew members. Video clips posted by China's state media show small pieces of the Boeing 737-800 plane scattered over a wide forested area, some in green fields, others in burnt-out patches with raw earth exposed after fires burned in the trees. Each piece of debris has a number next to it, the larger ones marked off by police tape.

As family members gathered at the destination and departure airports, what caused the plane to drop out of the sky shortly before it would have begun its descent to the southern China metropolis of Guangzhou remained a mystery. The search for the black boxes, which hold the flight data and cockpit voice recorders, would be difficult, the official Xinhua News Agency said, and involve drones and manual searching.

The crash left a deep pit in the mountainside, Xinhua said, citing rescuers. Chen Weihao, who saw the falling plane while working on a farm, told the news agency it hit a gap in the mountain where nobody lived.

"The plane looked to be in one piece when it nosedived. Within seconds, it crashed," Chen said.

China Eastern flight 5735 crashed outside the city of Wuzhou in the Guangxi region while flying from Kunming, the capital of the southwestern province of Yunnan, to Guangzhou, an industrial center not far from Hong Kong on China’s southeastern coast. It ignited a fire big enough to be seen on NASA satellite images before firefighters could extinguish it.

No foreigners were on board the lost flight, the Foreign Ministry said, citing a preliminary review.

Dinglong Culture, a Guangzhou company in both mining and TV and movie production, said in a statement to the Shenzhen stock exchange that its CFO, Fang Fang, was a passenger. Zhongxinghua, an accounting firm used by Dinglong, said that two of its employees were also on the flight.

The crash site is surrounded on three sides by mountains and accessible only by foot and motorcycle on a steep dirt road in the semitropical Guangxi region, famed for some of China’s most spectacular scenery. 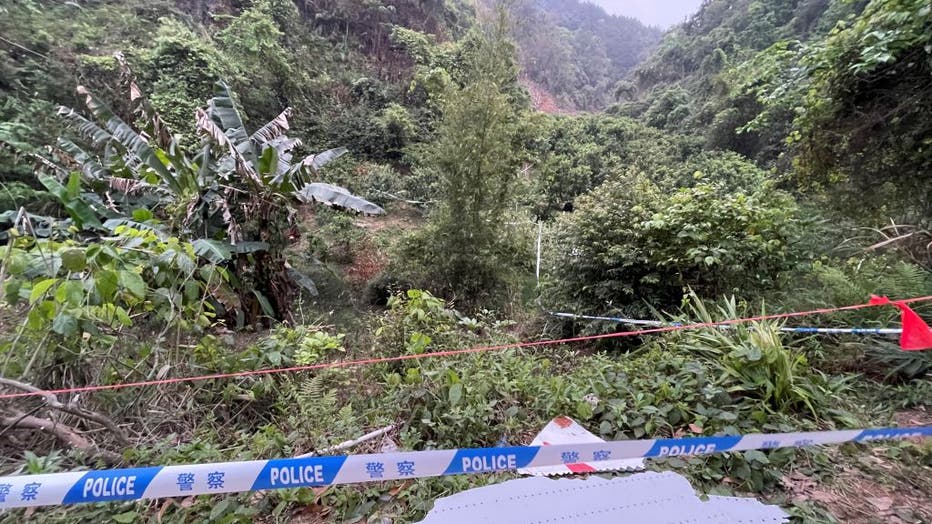 Rain fell Tuesday afternoon as excavators dug out a path to make access easier, state broadcaster CCTV said. The steepness of the slope made the positioning of heavy equipment difficult.

A base of operations was set up near the crash site with rescue vehicles, ambulances and an emergency power supply truck parked in the narrow space. Soldiers and rescue workers combed the charred crash site and surrounding heavily dense vegetation.

Police restricted access, checking each vehicle entering Molang, a village near the crash site. Five people with swollen eyes walked out of the village, got into a car and left. Onlookers said they were relatives of the passengers.

Family members gathered at Kunming and Guangzhou airports. People draped in pink blankets and slumped in massage chairs could be seen in a traveler rest area in the basement of the one in Kunming. Workers wheeled in mattresses and brought bagged meals. A security guard blocked an AP journalist from entering, saying that "interviews aren’t being accepted."

In Guangzhou, relatives were escorted to a reception center staffed by employees wearing full protective gear to guard against the coronavirus.

At least five hotels with more than 700 rooms had been requisitioned in Wuzhou's Teng county for family members, Chinese media reported.

Workers in hazmat suits set up a registration desk and administered COVID-19 tests at the entrance to one hotel, outside of Molang. A sign read, "The hotel is requisitioned for March 21 plane accident emergency use." At another hotel, a group of women, some wearing vests with Red Cross markings, registered at a hotel desk set up outside.

Boeing Chief Executive Dave Calhoun said that the company was deeply saddened by the news and had offered the full support of its technical experts to assist in the investigation.

"The thoughts of all of us at Boeing are with the passengers and crew members ... as well as their families and loved ones," he wrote in a message to Boeing employees.

The plane was about an hour into its flight, at an altitude of 29,000 feet (8,840 meters), when it entered a steep, fast dive around 2:20 p.m., according to data from FlightRadar24.com. The plane plunged to 7,400 feet before briefly regaining about 1,200 feet in altitude, then dove again. The plane stopped transmitting data 96 seconds after starting to dive. 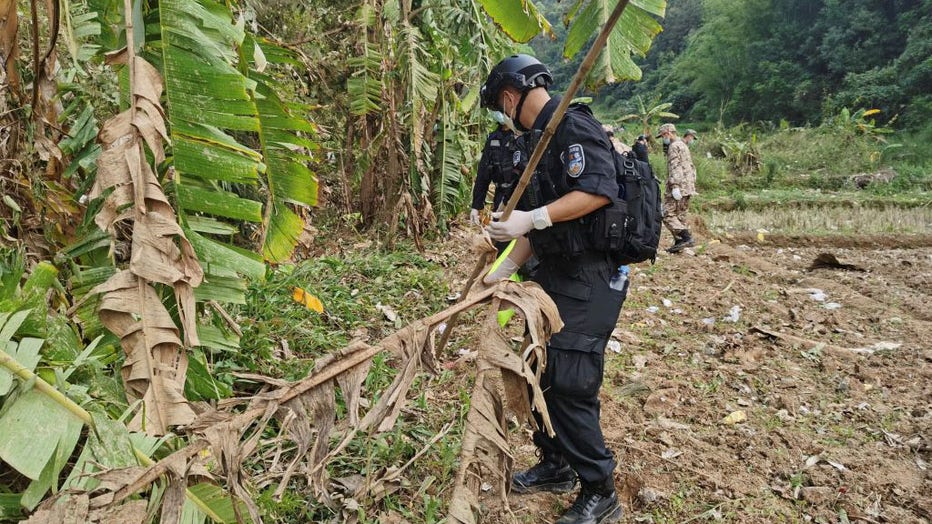 The aircraft was delivered to the airline in June 2015 and had been flying for more than six years.

Guangzhou Baiyun International Airport, where the flight was headed, is one of China’s main aviation hubs. It is the home base for China Southern Airlines. As the pandemic upended air travel, it rocketed past Beijing and Atlanta to claim the title of world’s busiest airport in 2020 — the most recent year for which annual data is available — handling more than 43 million passengers.

Guangzhou is the capital of Guangdong province, home to export-driven factories making smartphones, toys, furniture and other goods. Its Auto City district has joint ventures operated by Toyota, Nissan and others. Kunming, the departure city which is 1,100 kilometers (680 miles) west, is the capital of Yunnan province, an agricultural, mining and tourism center that borders Southeast Asia.

China Eastern, which is headquartered in Shanghai, has grounded all of its 737-800s, China’s Transport Ministry said. Aviation experts said it is unusual to ground an entire fleet of planes unless there is evidence of a problem with the model.

The airline is one of China's three largest carriers with more than 600 planes, including 109 Boeing 737-800s. The grounding could further disrupt domestic air travel already curtailed because of the largest COVID-19 outbreak in China since the initial peak in early 2020.

The Boeing 737-800 has been flying since 1998 and has an excellent safety record, said Hassan Shahidi, president of the Flight Safety Foundation. It is an earlier model than the 737 Max, which was grounded worldwide for nearly two years after deadly crashes in 2018 and 2019.

Before Monday, the last fatal crash of a Chinese airliner occurred in August 2010, when an Embraer ERJ 190-100 operated by Henan Airlines hit the ground short of the runway in the northeastern city of Yichun and caught fire. It carried 96 people and 44 of them died. Investigators blamed pilot error.