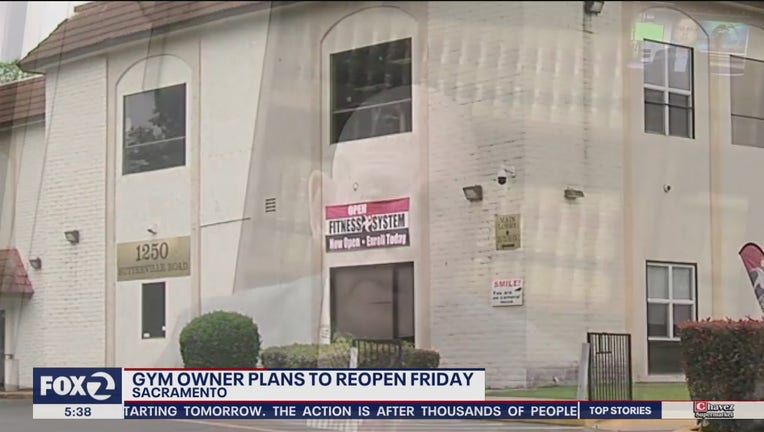 SACRAMENTO, Calif. - The owner of several gyms in the Sacramento plans to re-open Friday despite the governor’s stay-at-home orders.

Sean Covell, who owns three "Fitness System" franchises, announced the decision to his members this week.

His attorney, Brian Chavez-Ochoa, believes the restrictions imposed by the government during the pandemic, are a violation of the Constitution.

"This is government overreach, and under the First, the Fifth and the 14th amendments of the United States Constitution, we have a constitutional right to do exactly what we’re doing,” he said.

Ochoa Chavez said that all three locations will be in compliance with the CDC's social distancing guidelines -- and he says that the gyms will be cleaned every hour.

Earlier this week, Gov. Gavin Newsom said that gyms will be among the last businesses to get the all-clear in reopening, and he didn't give a date as to when California would be ready for this to happen.

The gym owner is not the first to defy shelter-in-place orders, which have stopped the spread of coronavirus but which have also crippled the economy.

A Vacaville hair stylist reopened this week saying she'd rather get a $1,000 citation rather than suffer the $15,000 in lost revenue she's already experienced. Bars and other salons have also decided to reopen. Protesters took to the streets in Sacramento, demanding the governor ease up and let people go back to work, despite the fact that California has been successful in flattening the curve and avoiding huge death tolls with its strict quarantine measures.

This week, the Bay Area Council released a survey saying that 71 percent of the businesses surveyed wanted to be back at work in the next month.