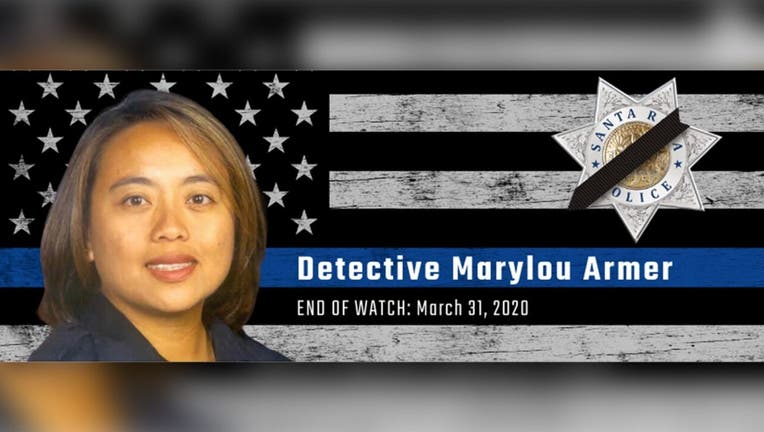 Santa Rosa Det. Marylou Armer was 43 when she died from the coronavirus on March 31. (Santa Rosa Police Department)

SANTA ROSA, Calif. - A California detective died from coronavirus complications after doctors twice refused to test her for the virus, according to a report Sunday.

But by then “it was too late already,” sister Mari Lau told the paper.

Lau told the paper that a doctor at Kaiser Permanente’s Vallejo Medical Center told her sister that because of her age and lack of underlying medical conditions she was not considered vulnerable to the virus.

The test was finally administered when her husband took her to the hospital, the paper reported. In the emergency room, she was quickly sedated and intubated in an effort to boost the dangerously low levels of oxygen in her bloodstream.

After the test came back positive, Armer was placed in a medically induced coma in the hopes that her condition would improve, according to the paper. But she never woke up and died March 31.

Lau told the paper her sister’s inability to be tested was “very frustrating.” At the time, medical providers across the United States were imploring the federal government to give them more testing kits to better track the spread of the virus.

Kaiser confirmed Saturday that Armer wasn’t immediately tested in a statement Saturday to the Press Democrat.

Her doctors had adhered to “public health authority testing guidelines, which have been based on a very limited availability of tests,” Dr. David Witt, Kaiser’s national infectious disease expert, said, according to the paper.

“We offer heartfelt sympathies to Detective Armer’s family and loved ones at this profoundly difficult time,” Witt said.

Armer first thought she had the flu, her sister told the paper.

Days later, her fever and body aches subsided a little, but she still had some trouble breathing.

“She said she’d never felt this kind of sickness in her body before,” Lau said.

Armer was the first California peace officer to die from the coronavirus.

Lau said her sister loved being a police officer.

“She really loved helping her community,” Lau said. “She just loved her job. She wanted to help anyone and everyone she could.”