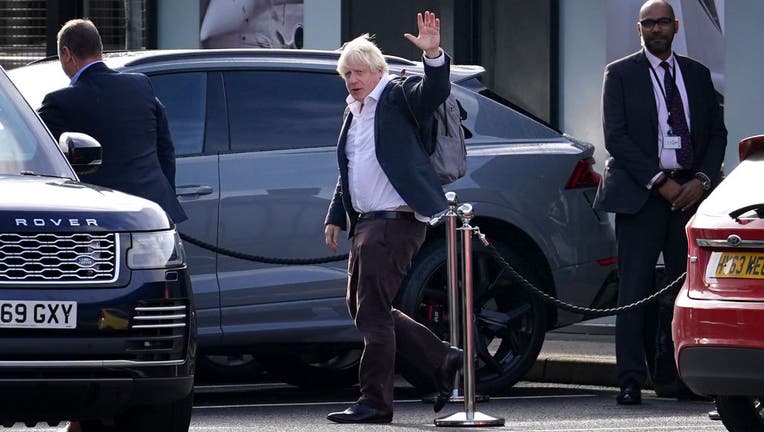 Former Prime Minister Boris Johnson arrives at Gatwick Airport in London, after travelling on a flight from the Caribbean, following the resignation of Liz Truss as Prime Minister. Picture date: Saturday October 22, 2022. (Photo by Gareth Fuller/PA I

LONDON (AP) - Former British Prime Minister Boris Johnson announced Sunday he will not run to lead the Conservative Party, ending a short-lived attempt to return to the prime minister's job he was ousted from little more than three months ago.

His withdrawal leaves former Treasury chief Rishi Sunak the strong favorite to be Britain's next prime minister. He could win the contest as soon as Monday.

Johnson, who was ousted in July amid ethics scandals has been widely expected to run to replace Liz Truss, who quit last week after her tax-cutting economic package caused turmoil in financial markets and obliterated her authority inside the governing party.

Johnson spent the weekend trying to gain support from fellow lawmakers after flying back from a Caribbean vacation.

Late Sunday he said he had amassed more than 100 names, the threshold to run.

But he was far behind Sunak in support. Johnson said he had concluded that "you can’t govern effectively unless you have a united party in Parliament."

Sunak garnered the public support of well over 100 Tory lawmakers to forge ahead of his two main rivals: Johnson and ex-Cabinet minister Penny Mordaunt.

The Conservative Party hastily ordered a contest that aims to finalize nominations Monday and install a new prime minister — its third this year — within a week.

Sunak, 42, was runner-up after Truss in this summer's Tory leadership race to replace Johnson after he was forced out by a string of ethics scandals. On Sunday, he confirmed he was running again in the latest leadership contest.

"There will be integrity, professionalism and accountability at every level of the government I lead and I will work day in and day out to get the job done," Sunak said in a statement.

Johnson's exit came after allies insisted he would run.. Business Secretary Jacob Rees-Mogg told the BBC on Sunday that he spoke with Johnson and "clearly he's going to stand" after flying back to London Saturday from a vacation in the Dominican Republic.

A possible return to power for Johnson, 58, who officially quit only in early September, deeply divided the Conservatives and alarmed many others. Supporters say he is a vote winner and has enough support from lawmakers, but many critics warn that another Johnson government would be catastrophic for the party and the country.

Northern Ireland minister Steve Baker, a former backer of Johnson and an influential politician within the Conservative Party, warned a Johnson comeback would be a "guaranteed disaster." Baker noted that Johnson still faces an investigation into whether he lied to Parliament while in office about breaking his government's own coronavirus restrictions during parties at Downing Street.

If found guilty, Johnson could be suspended as a lawmaker.

"This isn’t the time for Boris and his style," Baker told Sky News on Sunday. "What we can’t do is have him as prime minister in circumstances where he’s bound to implode, taking down the whole government ... and we just can’t do that again."

But Johnson won the backing of several senior Conservatives, including Nadhim Zahawi, another former Treasury chief.

"He was contrite and honest about his mistakes. He’d learned from those mistakes how he could run No 10 and the country better," Zahawi said.

Truss quit Thursday after a turbulent 45 days, conceding that she could not deliver on her botched tax-cutting economic package, which she was forced to abandon after it sparked fury within her party and weeks of turmoil in financial markets.

Sunak, who was Treasury chief from 2020 until this summer, steered Britain's slumping economy through the coronavirus pandemic. He quit in July in protest of Johnson's leadership.

In the summer contest to replace Johnson, Sunak called promises by Truss and other rivals to immediately slash taxes reckless "fairy tales" and argued that climbing inflation must be controlled first.

Tory voters backed Truss over Sunak, but he was proved right when Truss' unfunded tax-cutting package triggered chaos in the markets in September.

Dozens among Britain's 357 Conservative lawmakers have not yet publicly declared whom they are backing to replace Truss.