On Friday, President Joe Biden celebrated the passage of the $1.9 trillion COVID-19 relief package in his first Rose Garden event as president.

WASHINGTON - A day after President Joe Biden signed into law his $1.9 trillion COVID-19 relief package aimed at helping to defeat the virus and help the U.S. economy, he celebrated its passage with a group of congressional leaders at the White House.

The "bicameral" celebration in the Rose Garden included remarks from Vice President Kamala Harris, as well as other top Democrats who pushed for the bill — including House Speaker Nancy Pelosi and Senate Majority Leader Chuck Schumer.

Biden said Friday that he would draw on his experiences in 2009, saying he worked four to five hours daily for six months to ensure that the stimulus succeeded. That same type of focus will be needed for coronavirus relief.

"The devil is in the details," the president said. "It’s one thing to pass the American Rescue Plan. It’s going to be another thing to implement it. It’s going to require fastidious oversight to make sure there’s no waste or fraud and the law does what it’s designed to do. And I mean it. We have to get this right."

"The president promised ‘help is on the way,’ and today help has arrived," said Vice President Kamala Harris.

Speaking from the Oval Office yesterday after signing the bill, Biden said, "this historic legislation is about rebuilding the backbone of this country."

Most noticeable to many Americans are provisions providing up to $1,400 in direct payments and extending $300 weekly emergency unemployment benefits into early September.

Some of the $1,400 cash distributions could begin arriving in the bank accounts of Americans this weekend.

Also included are expanded tax credits over the next year for children, child care and family leave — some of them credits that Democrats have signaled they’d like to make permanent — plus spending for renters, food programs and people’s utility bills. 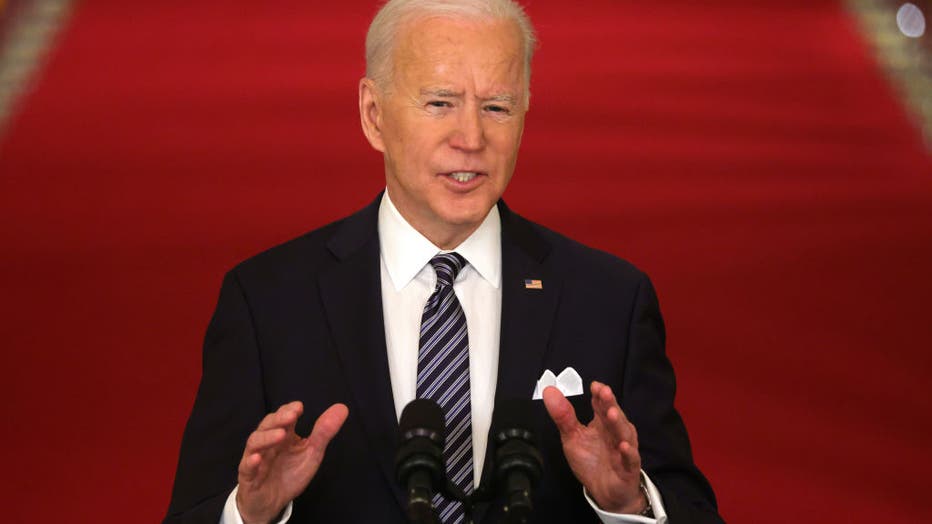 WASHINGTON, DC - MARCH 11: U.S. President Joe Biden speaks as he gives a primetime address to the nation from the East Room of the White House March 11, 2021 in Washington, DC. President Biden gave the address to mark the one-year anniversary of the

Biden’s planned celebration and remarks in the Rose Garden caps off a pivotal week for the president.

On Monday, the Centers for Disease Control and Prevention released initial guidance for how vaccinated people can resume some normal activities. On Wednesday, Congress approved his "American Rescue Plan," aimed at easing the economic impact of the virus on tens of millions of people.

The House gave final congressional approval to the sweeping package by a near party line 220-211 vote on Wednesday, seven weeks after Biden entered the White House and four days after the Senate passed the bill. Republicans in both chambers opposed the legislation unanimously, characterizing it as bloated, crammed with liberal policies and heedless of signs the crises are easing.

Biden had originally planned to sign the bill on Friday, but it arrived at the White House more quickly than anticipated.

In his first prime time address hours after signing the bill, the president raised the possibility of beginning to "mark our independence from this virus" by the Fourth of July in an effort to offer Americans fresh hope — and appealed anew for their help.

Speaking in the White House East Room, Biden said that as vaccine supplies continue to increase, he will direct states and territories to make all adults eligible for vaccination by May 1. The U.S. is expecting to have enough doses for those 255 million adults by the end of that month, but Biden warned the process of actually administering those doses would take time, even as his administration looks to instill confidence in the safety of the vaccines to overcome hesitance.

RELATED: Biden directs states to make all adults eligible for COVID-19 vaccine by May 1

"Let me be clear, that doesn’t mean everyone’s going to have that shot immediately, but it means you’ll be able to get in line beginning May 1," he said.

Biden announced an expansion of other efforts to speed vaccinations, including deploying an additional 4,000 active-duty troops to support vaccination efforts and allowing more people — such as medical students, veterinarians and dentists — to deliver shots. He is also directing more doses toward some 950 community health centers and up to 20,000 retail pharmacies, to make it easier for people to get vaccinated closer to their homes.

Biden added that his administration is planning to launch a nationwide website to help people find doses, saying it would address frustrations so that there would be "no more searching day and night for an appointment."

Almost exactly one year ago, President Donald Trump addressed the nation to mark the WHO’s declaration of a global pandemic. He announced travel restrictions and called for Americans to practice good hygiene but displayed little alarm about the forthcoming catastrophe. Trump, it was later revealed, acknowledged that he had been deliberately "playing down" the threat of the virus.

Biden implicitly criticized his predecessor, opening his remarks by referring to "denials for days, weeks, then months that led to more deaths, more infections, more stress, and more loneliness."

RELATED: WHO declared COVID-19 a pandemic on March 11, 2020 — marking the start of a long, devastating journey