President Joe Biden spoke on Wednesday, urging Americans to vote in the upcoming election as a way to save the country's democracy.

WASHINGTON - Warning that democracy itself is in peril, President Joe Biden called on Americans Wednesday night to use their ballots in next week's midterm elections to stand up against lies, violence and dangerous "ultra MAGA" election disruptors who are trying to "succeed where they failed" in subverting the 2020 elections.

This is no time to stand aside, he declared. "Silence is complicity."

After weeks of reassuring talk about America's economy and inflation, Biden turned to a darker, more urgent message, declaring in the final days of midterm election voting that the nation's system of governance is under threat from former President Donald Trump's election-denying lies and the violence Biden said they inspire.

The president singled out "ultra MAGA" Republicans — a reference to Trump's "Make America Great Again" slogan — calling them a minority but "driving force" of the Republican Party.

Pointing in particular to last Friday's attack on House Speaker Nancy Pelosi’s husband, Biden said that Trump’s false claims about a stolen election have "fueled the dangerous rise of political violence and voter intimidation over the past two years."

"There’s an alarming rise in the number of people in this country condoning political violence or simply remaining silent," Biden added. "In our bones we know democracy is at risk, but we also know this: It's in our power to preserve our democracy."

The president’s speech — focused squarely on the rite of voting and the counting of that vote — amounted to a plea for Americans to step back from the inflamed rhetoric that has heightened fears of political violence and challenges to the integrity of the elections. Biden was straddling two roles, speaking as both a president defending the pillars of democracy and a Democrat trying to boost his party’s prospects against Republicans.

He called out the hundreds of candidates who have denied the 2020 election result and now refuse to commit to accepting the results of the upcoming midterms. 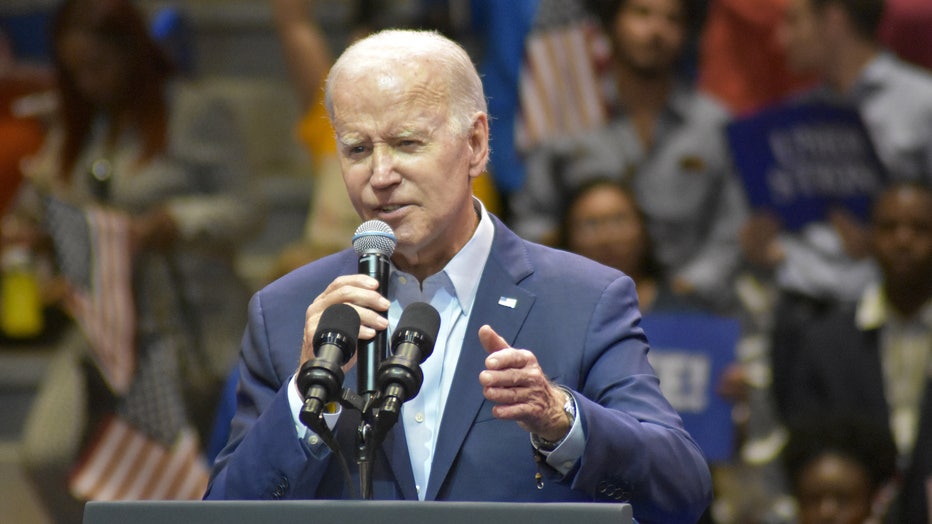 "This driving force is trying to succeed where they failed in 2020 to suppress the rights of voters and subvert the electoral system itself," Biden said.

"That is the path to chaos in America. It’s unprecedented. It’s unlawful. And it is un-American."

The speech came days after a man seeking to kidnap House Speaker Pelosi severely injured her husband, Paul Pelosi, in their San Francisco home in the worst recent example of the political violence that burst forth with the Jan. 6, 2021 insurrection at the Capitol and has continued with alarming, though less-spectacular incidents.

Election workers nationwide have questioned whether to go back to work following increased intimidation and harassment ahead of Election Day. At least five people have been charged with federal crimes for harassing workers as early voting has gotten underway.

Reports of people watching ballot boxes in Arizona, sometimes armed or wearing ballistic vests, have raised serious concerns about voter intimidation. Election officials nationwide are bracing for confrontations at polling sites. A flood of conspiracy theorists have signed up to work as partisan poll watchers.

Emphasizing that it is the first federal election since the Capitol riot and Trump's attempts to overturn the 2020 presidential election, Biden called on voters to reject candidates who have denied the results of the vote, which even Trump's own administration declared to be free of any widespread fraud or interference.

Biden asked voters to "think long and hard about the moment we are in."

"In a typical year, we are not often faced with the question of whether the vote we cast will preserve democracy or put it at risk," he said. "But we are this year."

"I hope you’ll make the future of our democracy an important part of your decision to vote and how you vote," Biden added, asking Americans to consider whether the candidates they are supporting would respect the will of the people and accept the outcome of their election.

"The answer to that question is vital and in my opinion it should be decisive," he said.

Pres. Biden 'in full campaign mode' during Soul of the Nation Speech in Philadelphia | LiveNOW from FOX

Biden also aimed to get ahead of conspiracy theories about the ongoing vote, saying Americans were voting early, by mail and by absentee ballot and it would take time to tally them "in a legal and orderly manner." Major changes in voting in 2020 because of the pandemic prompted more early voting and mail-in voting and saw record turnout. It took five days before the results of the 2020 presidential election were final.

"It is important for citizens to be patient," Biden said.

Some Republicans sharply criticized Biden's remarks. House Minority Leader Kevin McCarthy, who stands to be speaker of the House if the GOP retakes control of the chamber, tweeted, "President Biden is trying to divide and deflect at a time when America needs to unite—because he can’t talk about his policies that have driven up the cost of living. The American people aren’t buying it."

Biden delivered his remarks from Washington’s Union Station, blocks from the U.S. Capitol, just six days before polls close on Nov. 8 and as more than 27 million Americans have already cast their ballots.

Before the speech, U.S. Capitol Police Chief Tom Manger said he’s reviewed the attack on Pelosi's husband and believes today’s political climate calls for more resources and better security for members of Congress after a massive increase in threats to lawmakers following the Capitol riot. He also made a rare call to stop the rancorous conspiracy talk that has swirled around the attack.

"Our brave men and women are working around the clock to meet this urgent mission during this divisive time," he said in a statement. "In the meantime, a significant change that will have an immediate impact will be for people across our country to lower the temperature on political rhetoric before it’s too late."

Biden last delivered a prime-time speech on what he called the "continued battle for the soul of the nation" on Sept. 1 outside Independence Hall in Philadelphia, in which he condemned the "MAGA forces" of Trump and his adherents as a threat to America's system of government.

The new remarks come as hundreds of candidates who have falsely denied the legitimacy of the 2020 presidential election are on ballots across the country, with many poised to be elected to critical roles overseeing elections.

In contrast to the September remarks, which drew criticism from some corners for being paid for by taxpayers, Biden's Wednesday night speech was hosted by the Democratic National Committee.

Many Americans remain pessimistic about the state of U.S. democracy. An October poll by The Associated Press-NORC Center for Public Affairs Research found that just 9% of adults think democracy is working "extremely" or "very well," while 52% say it’s not working well.