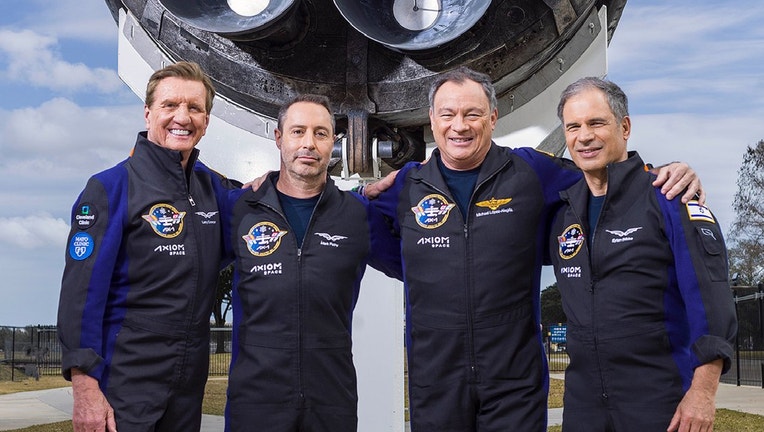 ORLANDO, Fla. - Axiom Space and SpaceX are once again adjusting the launch date for the upcoming Ax-1 crewed mission.

The launch of the first all-private astronaut mission to the International Space Station is now planned for no earlier than April 6.  It had been scheduled for Sunday, April 3.

The change in the timeline comes after NASA approved this coming weekend for the "wet dress rehearsal" of the Artemis moon mission on Launch Pad 39B at NASA’s Kennedy Space Center.

"NASA, Axiom and SpaceX are now looking at no earlier than April 6 for the launch of Axiom Mission 1 (Ax-1), the first private astronaut mission to the International Space Station, pending range approval," NASA posted on its blog.  "For an April 6 launch, Ax-1 static fire would take place April 4."

The AX-1 crew will fly on SpaceX's Dragon Endeavour capsule to and from the space station and splash down off the coast of Florida following 10 days in orbit.  The Ax-1 mission will lift off from Launch Complex 39A at NASA’s Kennedy Space Center.

The change in the Axiom launch date could impact the launch of the next NASA-SpaceX crewed mission. SpaceX previously announced that a launch date for the Crew-4 mission would be no earlier than Tuesday, April 19.

Michael López-Alegría is the Chief Astronaut for Axiom Space and Commander of the Ax-1 mission. López-Alegría is a four-time astronaut, having flown on Space Shuttle missions STS-73, STS-92, and STS-113, and served as Commander of ISS Expedition 14, flying to and from the ISS aboard Soyuz TMA-9. He holds NASA records for the most Extravehicular Activities (EVA) or "space walks" (10) and cumulative EVA time (67 hours 40 minutes). In 2021, he was inducted into the U.S. Astronaut Hall of Fame. López-Alegría was born in Madrid, Spain, and immigrated to the United States with his family.

Larry Connor is an entrepreneur, non-profit activist investor, and the Ax-1 Pilot. Through the Ax-1 mission, Connor will become the first private pilot to reach the ISS and the first human to reach the deepest ocean depths and outer space within one year. Connor is the founder and managing partner of The Connor Group, a real estate investment firm he grew from $0 to $3.5 billion in assets. He’s also founded two technology companies. His non-profit endeavors include The Connor Group Kids & Community Partners, which invests in programs that pull children out of generational poverty, and The Greater Dayton School –Ohio’s first private non-religious school exclusively for under-resourced students.

Mark Pathy is an entrepreneur, investor, and philanthropist as well as a Mission Specialist on Axiom Space’s AX-1 mission. Pathy is currently the Chief Executive Officer and Chairman of Montreal-based MAVRIK, a privately-owned investment and financing company he founded that focuses on innovation and social impact. As a strong believer in the importance of philanthropy, Pathy is a member of the boards and Executive Committees of the Montreal Children’s Hospital Foundation, Dans La Rue, and the Pathy Family Foundation.

Eytan Stibbe is an impact investor, philanthropist, and mission specialist on the AX-1 mission to the International Space Station. In collaboration with the Ramon Foundation, the Israel Space Agency, the Ministry of Innovation, Science and Technology, and the Ministry of Education, Stibbe will fly to the ISS under the "Rakia" banner and the maxim "There is no dream beyond reach’’ that magnificently captures the spirit of the mission: "Rakia" is a biblical term that designates the creation of the sky. During his time on the ISS Stibbe will facilitate scientific experiments, educational research, and artistic activities. "Rakia" –a mission that wholly embraces peace, innovation, and social responsibility –will allow Stibbe a unique opportunity to foster his life-long interest in exploration and development.