Axiom-1 plans for splashdown off Florida coast on Sunday

Four private astronauts plan to undock from the International Space Station Saturday with a splashdown off the coast of Florida on Sunday.

KENNEDY SPACE CENTER, Fla. - Four private astronauts plan to undock from the International Space Station Saturday with a splashdown off the coast of Florida on Sunday.

NASA, Axiom Space and SpaceX teams made the decision for the Axiom Mission 1 (Ax-1) crew on Wednesday after being previously delayed due to weather. 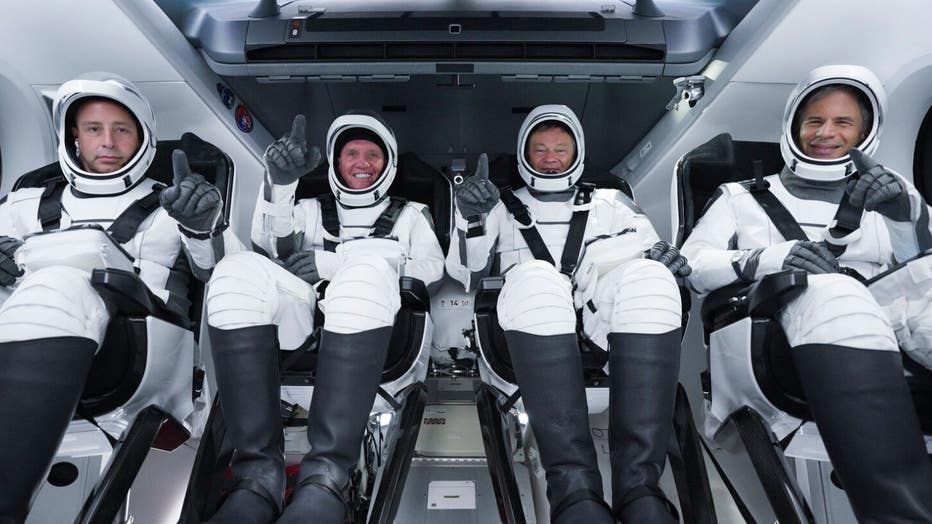 The Ax-1 crew is targeting a splashdown off the coast of Florida this weekend. (Photo credit: Axiom Space Twitter)

NASA says that this time was the best weather for splashdown and the return trajectory required to bring the crew and the SpaceX Dragon Endeavour spacecraft back to Earth safely.

NASA said the private Axiom-1 mission could not undock Tuesday night because of poor weather conditions for a Dragon spacecraft splashdown off Florida.

SpaceX launched the four private space explorers in the Dragon Endeavour spacecraft from Kennedy Space Center on April 8. The flight was the first mission for Axiom Space's private space program in which people pay around $55 million each to fly to the ISS. Axiom Space Vice President and former NASA astronaut Michael Lopez-Alegria led the mission with paying customers Larry Connor, Mark Pathy and Eytan Stibbe.

This Axiom-1 departure delay also put a hold on the launch of the Crew-4 government astronauts from Kennedy Space Center with SpaceX, which was planned for Saturday morning.

Kathy Lueders, the head of NASA's human spaceflight operations, said SpaceX, NASA and Axiom Space are reviewing the weather throughout the day to find a new window of return for the four Axiom-1 crew members.

Mission controllers are looking for specific weather criteria, including minimal wave height, low winds and no storms for a splashdown in one of seven locations around the Florida peninsula.

NASA wants 48 hours between the departure of the Dragon Endeavour carrying the private astronaut crew home and the new Dragon Freedom arriving at the space station with the Crew-4 astronauts.

"When Ax-1 departs, (the space station) then has room for Crew-4 to dock. We want to provide a two-day gap after return for data reviews and to prepare for launch and stage recovery assets," Lueders said in a tweet Wednesday. "We'll make decisions about a new Crew-4 launch date based on safely executing our plans."

NASA says the earliest available launch window for Crew-4 is now Tuesday at 4:15 a.m. ET. There are additional opportunities on Wednesday and Thursday.

The new launch date and time will be dependent upon the safe return of the Ax-1 crew and a review of the flight data.

Additionally, the Crew-3 astronauts have been on the ISS for six months and are awaiting their return ticket to Earth. NASA astronauts Tom Marshburn, Raja Chari, Kayla Barron and ESA astronaut Matthias Maurer arrived at the ISS in November.

With the latest Axiom-1 return delay, the Crew-4 launch was unlikely to launch Saturday. However, looking at the launch forecast from the Space Force's 45th Weather Squadron, Saturday's weather would have presented a challenge.

A pattern of showers and occasional storms is expected to begin Friday and continue into the weekend, according to the forecast.

Weather for a human spaceflight liftoff is more complicated than a launch without a crew on board.