Deputies in Flagler County say they found what they believe to be a grenade during a traffic stop on Monday.

FLAGLER COUNTY, Fla. - Deputies in Flagler County arrested a man after they said they found a live grenade inside a truck during a traffic stop on Monday.

The Flagler County Sheriff’s Office said that the incident happened along County Road 305 in Bunnell.

Deputies said 65-year-old Louis Branson was pulled over for an expired tag.  When the deputy said he learned his license had been expired since 2019, he searched his truck and found drug paraphernalia and the grenade.

The St. Johns County Sheriff’s Office Bomb Squad was called in to detonate the device and render it safe.

"This guy was pretty stupid to take it and drive it around. He’s lucky that he wasn’t driving one day and it exploded," said Flagler County Sheriff Rick Staly. "It shows how well-trained they are, how observant they are. We believe in guardianship policing and they definitely guarded the community today." 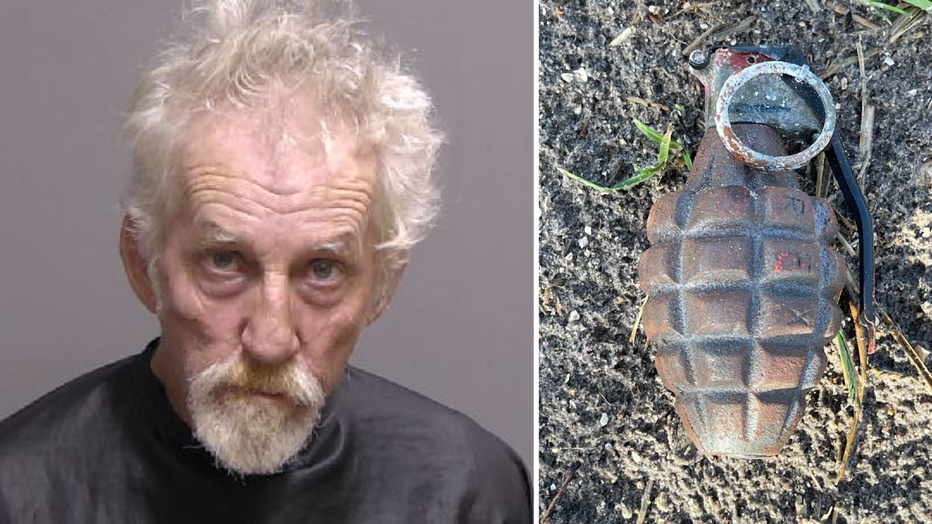 The man claimed that he found the grenade when cleaning a veteran's home, according to authorities, and wasn’t sure if it was active.

The sheriff said he doesn’t buy the story, citing Branson's "long and violent" criminal history in both Florida and Georgia.

Branson was arrested on charges including driving with an expired license for more than six months and possession of drug paraphernalia.  He was booked into the Sheriff Perry Hall Inmate Detention Facility.  Additional charges are possible.