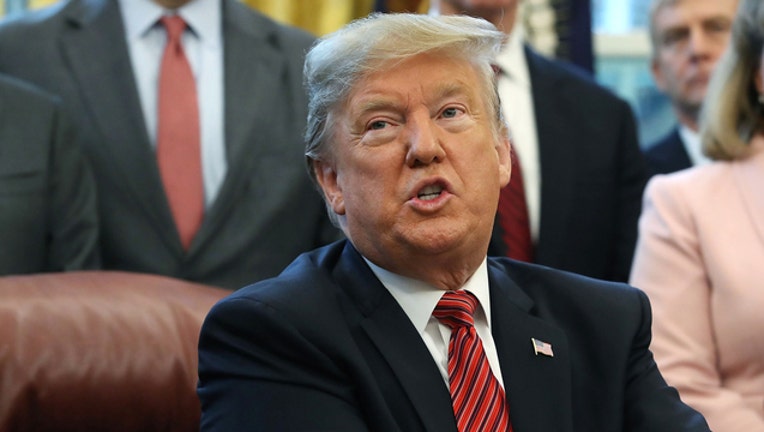 WASHINGTON (AP) -- With the deceptive use of a video, President Donald Trump on Thursday heartily thanked his White House predecessor for supporting his policy at the Mexican border. Barack Obama has offered no such support; only criticism.

Trump also denied that he ever expected Mexico to make a direct payment for his border wall, despite a call in a campaign policy paper for a "one-time payment" from Mexico of $5 billion to $10 billion, with options for Mexico to contribute in alternative ways. Mexico is refusing to contribute at all.

A look at Trump's statements Thursday as he traveled to Texas to make his case for what he calls a security and humanitarian crisis, a possible precursor to declaring a national emergency at the border:

Trump: "President Obama, thank you for your great support - I have been saying this all along!" - tweet, accompanied by video of Obama speaking as president in 2014.

Trump: "Obama used to call it a crisis at the border, too." - remarks before departing the White House for Texas.

The Facts: Obama's remarks in the short video clip do not support Trump's proposal for a border wall or endorse the path Trump is considering now: declaring a national emergency that might enable him to circumvent Congress and unilaterally spend money on the wall. Instead, Obama was asking Congress to approve an emergency appropriation to deal with a surge of tens of thousands of unaccompanied children and youth, mostly from Central American, trying to cross the border from Mexico.

"We now have an actual humanitarian crisis on the border," Obama said at the time, accompanied by Vice President Joe Biden. He was referring specifically to the surge of minors that year.

That crisis eventually eased as the U.S. stepped up border enforcement, surveillance and resources for the waves of unaccompanied children. Now, a sharp increase in the number of families at the border, coupled with the Trump administration's hard-line stance, is overwhelming border resources, worsening a backlog in the asylum system and leaving migrants to live in abysmal conditions on the Mexican side.

Trump, however, has been unable to convince Congress that the border poses a national security risk. He has made a series of statements falsely claiming that terrorists are pouring in from Mexico, that a wall would choke off shipments of illicit drugs, which actually come mainly through legal ports of entry, and that people who get in the country illegally commit a disproportionate share of violent crime.

Late in his presidency, Obama was repeatedly critical of Trump's immigration stance and the wall specifically. In May 2016, for example, he said: "Suggesting that we can build an endless wall along our borders, and blame our challenges on immigrants - that doesn't just run counter to our history as the world's melting pot; it contradicts the evidence that our growth and our innovation and our dynamism has always been spurred by our ability to attract strivers from every corner of the globe."

Mexico and the Wall

Trump, on Mexico paying for the wall: "I never meant they're going to write out a check." - remarks before departure to Texas.

Trump: "Mexico is paying for the wall indirectly. And when I said Mexico will pay for the wall, in front of thousands and thousands of people, obviously they're not going to write a check." - remarks before departure.

Trump: "They're paying for the wall in a great trade deal." - remarks in Texas.

The Facts: Actually, a Trump campaign policy paper envisaged an explicit payment from Mexico: "It's an easy decision for Mexico: make a one-time payment of $5-10 billion," the paper said.

The plan also outlined various ways for Trump to compel Mexico to pay for the wall, such as by Washington cutting off billions of dollars in remittances sent back to Mexico by immigrants living in the U.S., or by recouping the money through trade tariffs or higher visa fees. None of that has happened.

Instead, Trump is arguing that the updated trade agreement with Canada and Mexico will pay for the wall because of economic benefits he predicts will come from the deal. Nothing in the trade agreement would cover or refund the construction cost or require a payment from Mexico. Instead, he is assuming a wide variety of economic benefits will come from the agreement that can't be quantified or counted on. For example, he has said the deal will dissuade some U.S. companies from moving operations to Mexico and he credits that possibility as a payment by Mexico.

The agreement preserves the existing liberalized environment of low or no tariffs among the U.S., Mexico and Canada, with certain improvements for each country. The deal has yet to be ratified in any member country and there is no assurance it will win legislative approval.

Although his campaign left open the possibility that Mexico might somehow contribute to the cost indirectly, Trump roused his crowds with the straight-ahead promise: "I will have Mexico pay for that wall."

Again and again at his rallies, Trump asked his crowds dramatically who would pay for the wall.

Now he is saying his words were not meant to be taken literally.