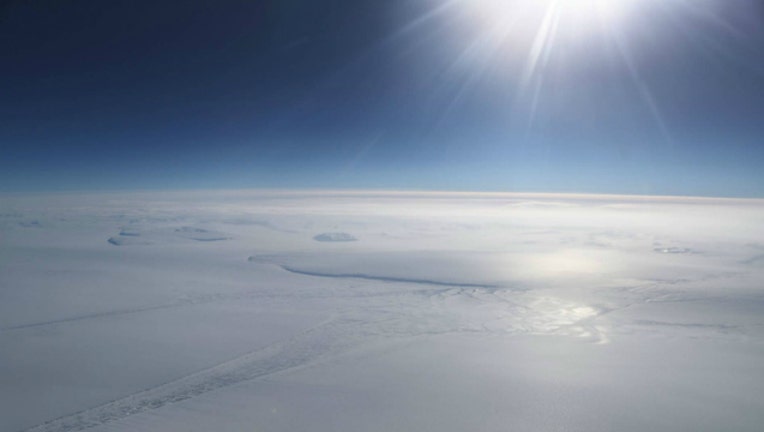 FOX NEWS - As climate change conditions continue to increase, new research put forth by geologists suggests that the West Antarctic ice sheet (WAIS) could melt and cause a massive global flood.

The study, presented at the American Geophysical Union earlier this month, highlights the concerns and the risks involved if the sheet ─ which originally disappeared 125,000 years ago because of a changing climate ─ were to collapse.

"Ice-sheet models link Pine Island glacier absence to full WAIS collapse into ice caps on mountains," the study's abstract reads. "Our record thus provides the first direct indication of a much smaller LIG WAIS, providing paleo-context for the susceptibility of the WAIS to collapse."

Speaking with Science magazine, Boston College paleoclimatologist Jeremy Shakun said that it may not require much for the West Antarctic ice sheet to move, which could cause ocean levels to rise as much as 8 feet per century.

If the findings hold up, it would confirm “the West Antarctic Ice Sheet might not need a huge nudge to budge,” Shakun told the news outlet. That could suggest “the big uptick in mass loss observed there in the past decade or two is perhaps the start of that process rather than a short-term blip.”

The study's lead author, Oregon State glacial geologist Anders Carlson, said: “We had an absence of evidence. I think we have evidence of absence now.”

The Alfred-Wegener Institute suggests that the West Antarctic ice sheet is not terribly stable and cited a 2016 study that suggested it could disappear in as little as 1,000 years.

"Given a business-as-usual scenario of global warming, the collapse of the West Antarctic could proceed very rapidly and the West Antarctic ice masses could completely disappear within the next 1,000 years," says Johannes Sutter, the study's main author in comments on the Institute's website.

The ice sheet originally disappeared approximately 125,000 years ago, the study noted, and found that sea levels were more than 19 feet (6 meters) above present levels.

A study released in June notes that climate change has caused more than 3 trillion tons of ice to melt from Antarctica over the past 25 years ago, according to a USA Today report.

In September, NASA unveiled its new $1 billion satellite, ICESat-2, to give humanity a stronger, data-backed vision of exactly how fast Earth’s ice is melting.

According to the government space agency, melting ice in Greenland and Antarctica has increased the global sea level more than a millimeter per year, which is a third of the overall increase.