The Americans with Disabilities Act, a landmark civil rights law, was signed July 26, 1990. President Joe Biden co-sponsored the bill as a senator and gave remarks on its 31st anniversary.

WASHINGTON - President Joe Biden on Monday commemorated the 31st anniversary of the Americans with Disabilities Act, a landmark civil rights law for Americans with disabilities, and announced a new effort to support those grappling with the long-term effects of COVID-19.

Biden, who was a co-sponsor of the bill as a senator, was joined at a White House event by Vice President Kamala Harris and Tyree Brown, a Maryland artist who was in a car accident in 2015 that left her quadriplegic. Biden said ADA is more than a law, but a "testament to our character as a people."

The Americans with Disabilities Act prohibits discrimination against individuals with disabilities in all areas of public life, including jobs, schools, transportation, as well as all public and private places that are open to the general public. It requires state and local government agencies, businesses and nonprofit organizations that provide goods or services to the public to make "reasonable modifications," including the allowance of service animals — among other things.

The legislation was signed into law on July 26, 1990, by President George H.W. Bush, who called its passage a "historic opportunity" that signaled "the end to the unjustified segregation and exclusion of persons with disabilities from the mainstream of American life." 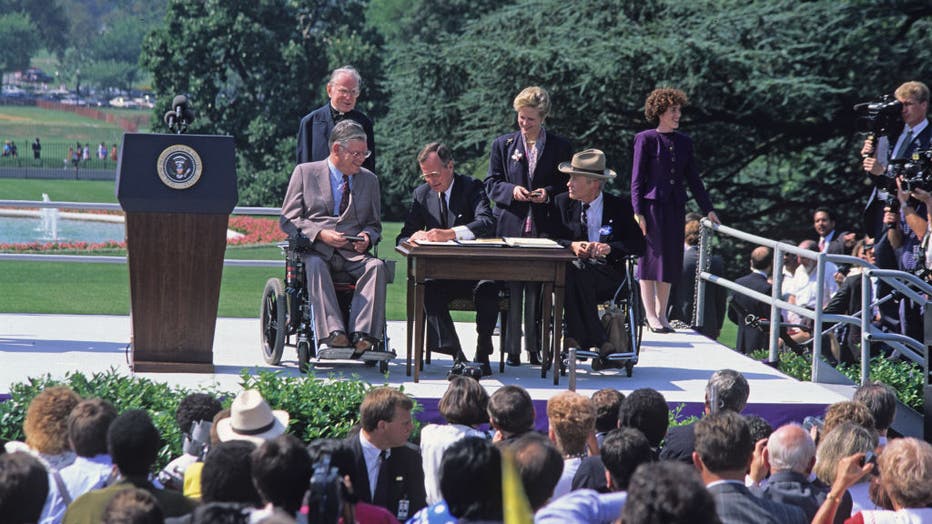 Biden, who signed a proclamation marking the anniversary of the ADA, touted the bipartisan effort behind its passage.

"Perhaps most importantly, we did it together," Biden said from the Rose Garden. "This was a Democratic bill that was signed by a Republican president. A product of passion and compassion, not partisanship, progress that wasn’t political but personal to millions of families."

He noted how the law was personal, particularly, to former Republican Sen. Bob Dole, who lost the use his right hand in World War II. Dole "made the rights of disabled Americans a lifelong cause," Biden, who served with Dole for more than two decades in the Senate, said. 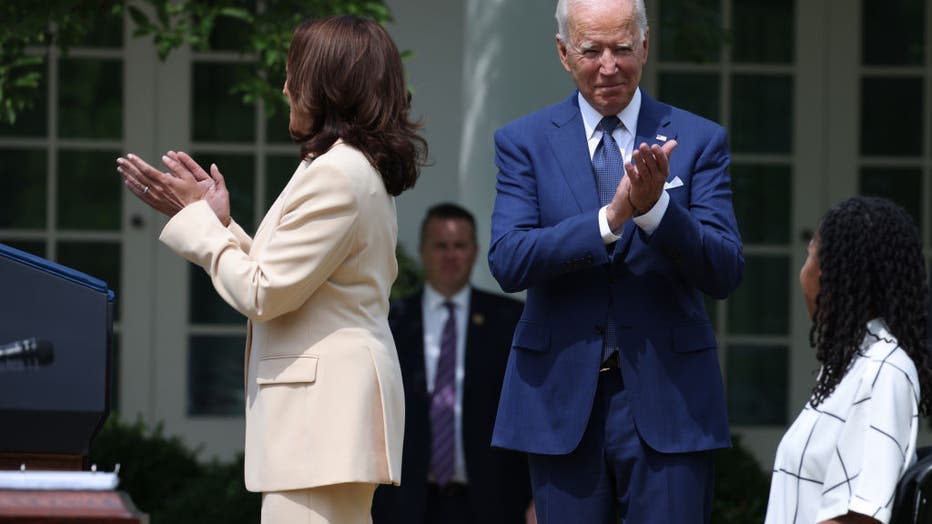 Vice President Kamala Harris and President Joe Biden applaud during an event in the Rose Garden of the White House on July 26, 2021 in Washington, D.C. The event was to mark the 31st anniversary of the ADA being signed into law. (Photo by Anna Moneym

The president also announced resources to support individuals experiencing long-term symptoms of COVID-19, known more commonly as "long COVID." Although most people with COVID-19 get better within weeks of becoming infected, the Centers for Disease Control and Prevention says some people can experience a wide range of ongoing health problems for four or more weeks.

A study published July 15 in the Lancet found more than 200 symptoms affecting 10 organ systems associated with the coronavirus. The more than 3,700 respondents of the study took longer than 35 weeks to recover, on average.

"Many Americans who seemingly recover from the virus still face lingering challenges, like breathing problems, brain fog, chronic pain and fatigue. These conditions can sometimes rise to the level of a disability," Biden said.

The Departments of Health and Human Services (HHS), Justice, Education, and Labor released guidance explaining that some individuals with long COVID may have a disability under various civil rights laws that entitle them to protection from discrimination.

The Office of Disability Employment Policy (ODEP) at the Department of Labor also launched a new website that includes information on requesting and providing workplace accommodations for individuals with long COVID.

"We’ve made important progress, but we still have work to do," Biden added. "We have to keep going to ensure that every single American has a chance to contribute their talents and thrive and succeed."