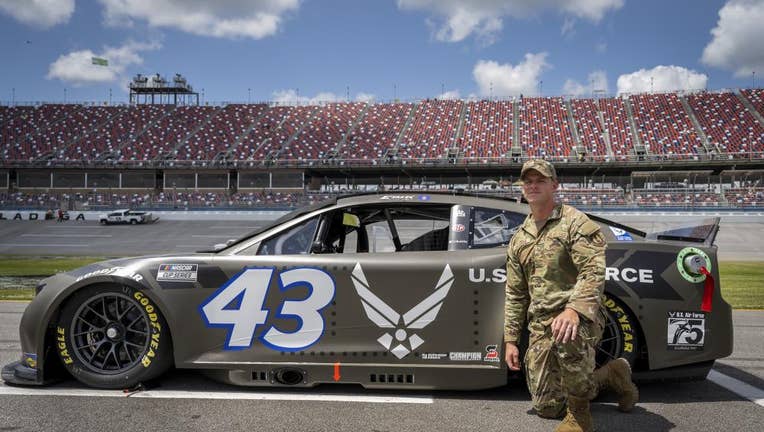 hoto By Samuel King Jr. | Tech. Sgt. Andrew Brockman, 96th Maintenance Group, stands next to the Air Force-sponsored NASCAR car at Talladega Superspeedway April 24, 2022 in Alabama. Brockman received a trip to the NASCAR race after winning an AFRS an

The U.S. Air Force debuted its newly designed car for NASCAR after launching a contest.

The design winner was Tech. Sgt. Andrew Brockman of the 96th Maintenance Group. His theme was a B-29-inspired design with a green-gray color scheme featuring the Air Force logo and the number "43" painted on the sides.

His car recently debuted at the Talladega Superspeedway in Alabama.

"We wanted to showcase the talent of our Airmen outside of their normal jobs and then let the NASCAR fans decide their favorite design," Master Sgt. Shawn Emmerling, Air Force Recruiting Service events marketing, said on a military-related website. "This paint design doesn’t just represent Air Force Recruiting, but it reflects the entire Air Force and our heritage."

Brockman said he was floored when he found out his design won the context and saw the car in the garage.

"Walking around the garage and seeing the car for the first time while the engine was roaring was incredible," said Brockman. "Then, when we were able to walk the car to the track and see it lined up and ready for battle is really when it became real."

As part of the prize for winning, Brockman and his wife, Valerie, toured the track and pit row. They were also able to take a fast lap around the 2.66-mile track, met Erik Jones, driver of the #43 Air Force car, and watched the race from the Petty GMS pit box.

"Watching the 43 Chevy fly around the track as a top ten contender all day was beyond an amazing feeling," Brockman continued.