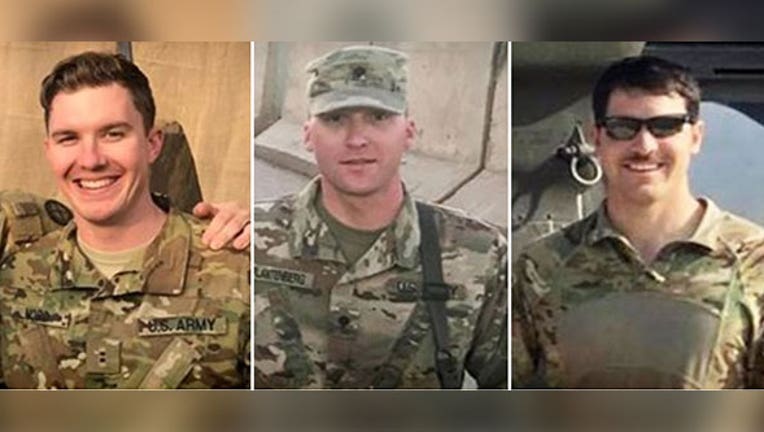 According to officials, the unit returned from a nine-month deployment to the Middle East in May 2019, where they conducted medical evacuations in support of Operation Spartan Shield and Operation Inherent Resolve. All three soldiers deployed on this mission.

Chief Warrant Officer 2 Charles Nord was born in Breckenridge, Minnesota and graduated from Perham High School in 2007. That same year, he enlisted in the Minnesota National Guard as an M1 armor crewman. In 2016, he served as a warrant officer as a Black Hawk aeromedical evacuation pilot.

Chief Warrant Officer 2 James Rogers Junior was born in Madelia, Minnesota and graduated from St. James High School in 2010. He enlisted with the National Guard before he graduated and became a warrant officer as a Black Hawk pilot in his third year with the guard.

Speaking after a news conference on Saturday, Major Nathan Burr, who served with the three soldiers, said the men were very close and among the best the unit had to offer.

"This organization is a very tight-knit organization based on the mission of medevac," explained Major Burr. "So, we live together, we sleep together, in order to be able to provide that critical mission."

"All three of them were beautiful humans, beautiful people," added Burr. "And they were our top-notch soldiers in the unit."

"James was the jokester of the group," recalled Sgt. Nicholas Arrigoni. "When he was in a group, he was usually the one talking, making the jokes."

"Chuck was super proud of his family. He was an awesome dad, someone who was super excited about having kids," added Major Burr. "Kort was one of the most patient, dedicated people I knew to maintenance and crewing an aircraft."

Soldiers say the fact that the crew had just returned in the spring from a nine-month mission to Kuwait makes the loss even more tragic.

"It’s incredibly hard with the timing. Making it through a deployment, making it through a combat tour and the intense missions we were supporting, to come home in a very routine type of mission to have this happen," said Burr. "It’s hard to handle."

"It truly is our worst nightmare, but we’ll get through it...hopefully we learn something from it," he added.

In a statement released through the National Guard, Sgt. Plantenberg's family writes:

“This is a time of unimaginable loss, sadness and sorrow for our family. Kort was everything to us — a kind, loving son and brother as well as an incredibly dedicated and loyal friend, neighbor, Correctional Officer and Guardsman.

It’s impossible to envision life without him. We are deeply grateful for the tremendous outpouring of love and support from family, friends, the Saint John’s monastic community, and people throughout Central Minnesota and the State.

We ask that during this time of grieving that people respect our need for privacy. We want to express our sympathies and offer our prayers to the families of the other two Guardsmen who perished in this unfortunate and tragic accident.

We take comfort in our faith, the love of family and friends, and the knowledge that Kort died doing what he loved best: serving his country and pursuing his life-long dream to be a Black Hawk helicopter pilot.”

"On behalf of all Minnesotans, Gwen and I offer our deepest sympathies to the families of Chief Warrant Officer Two Charles Nord, Chief Warrant Officer Two James Rogers, and Sergeant Kort Plantenberg. They paid the ultimate price in their service to Minnesota and to the United States of America. Words will never ease the pain of this tragic loss and the state of Minnesota is forever in the debt of these warriors."