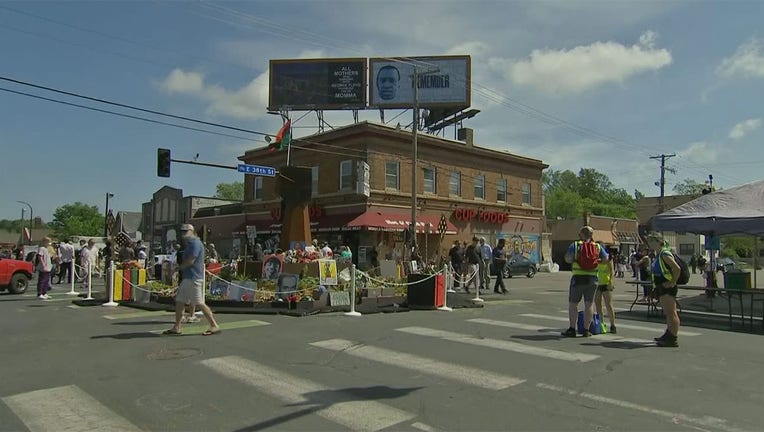 Shots were fired about a block away from George Floyd Square Tuesday morning. (APTV)

MINNEAPOLIS (FOX 9) - Shots were fired near the intersection of 38th Street and Chicago Avenue South in Minneapolis Tuesday morning, the same area where people are beginning to gather to mark the one-year anniversary of George Floyd's death.

Around 10:09 a.m., police responded to the 3800 block of Elliot Avenue South on a report of the sound of shots fired, according to Minneapolis Police Department spokesperson John Elder. National and local media in the area covering the one-year anniversary of Floyd’s death also heard the shots and took cover.

Reporters at George Floyd Square covering the anniversary of Floyd's death heard gunshots ring out near the intersection Tuesday morning.

Officers learned a suspect vehicle was seen speeding away from the area. A short time later, a victim showed up at Abbott Northwestern Hospital suffering from a gunshot wound. The victim was transported to Hennepin County Medical Center, where they are in critical condition, but expected to survive, according to Elder.

Elder said this is "evolving incident." No additional information was released.

In the year since Floyd’s death, the intersection where he was killed—38th and Chicago—has become an international memorial to Floyd and a gathering place for the community. The intersection, now known as George Floyd Square, remains closed to traffic.

Journalist recounts hearing gunshots at 38th and Chicago while live

Phillip Crowther, of the Associated Press, talked to FOX 9 about the experience of hearing gunshots behind him while he was reporting live on camera Tuesday morning at 38th and Chicago in Minneapolis.

A daylong celebration at George Floyd Square honoring Floyd's life on the anniversary of his death scheduled to start at 1 p.m.