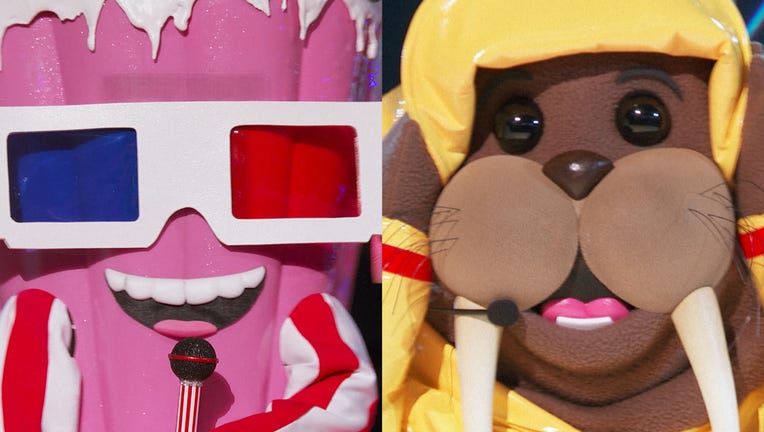 LOS ANGELES - The Walrus and Milkshake were unmasked on a special Sunday night episode of "The Masked Singer," which celebrated the ‘90s.

Warning: This article contains spoilers for Season 8, episode 6, of "The Masked Singer."

The top-secret singing competition show included host Nick Cannon and panelists Nicole Scherzinger, Robin Thicke, Ken Jeong, and Jenny McCarthy-Wahlberg. In a true celebration of the 1990s, Tag Team kicked off the episode by performing their iconic 1993 hit "Whoomp! (There It Is)."

During Season 8 of "The Masked Singer," there are multiple unmaskings every week. Find out who was unmasked this week below:

Find out the Walrus' identity from season 8, episode 6, of "The Masked Singer" on FOX!

The Walrus performed the 1992 hit "Two Princes" by the rock group Spin Doctors, and was the first to be unmasked, with Thicke guessing correctly.

Despite a memorable performance, the Walrus’ fate was sealed and revealed to be actor Joey Lawrence, best known for playing Joey Russo on "Blossom" and Joe Longo in "Melissa & Joey."

Next up was the Milkshake, who performed "Jump On It" by Sir Mix-A-Lot. Milkshake later returned to the stage for a showdown with The Lambs, but it ended up being the last straw.

The Milkshake was revealed to be NFL running back Le'Veon Bell.

Your next binge: "The Real Dirty Dancing," streaming free on Tubi

The eighth season of "The Masked Singer" airs Wednesdays at 8 p.m. EST on FOX. It will also be streaming "The Masked Singer" channel on Tubi, where you can also stream all seasons of the series.
About Tubi: Tubi has more than 40,000 movies and television series from over 250 content partners, including every major studio, in addition to the largest offering of free live local and national news channels in streaming. The platform gives fans of entertainment, news and sports an easy way to discover new content that is available completely free.