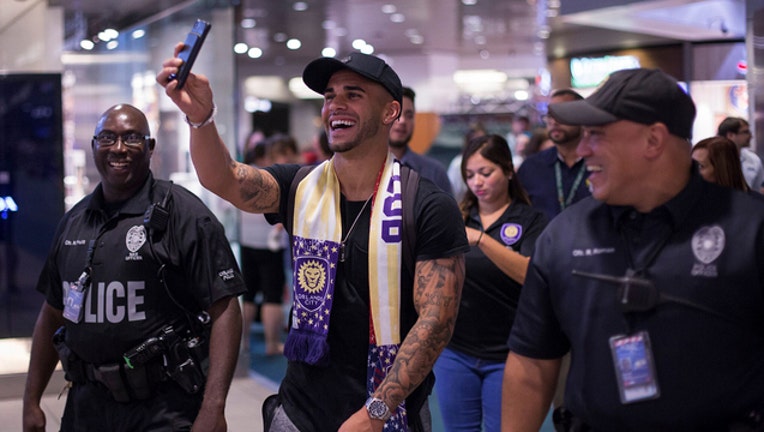 Sporting Kansas City forward Dom Dwyer has been traded to Orlando City for what could be a Major League Soccer-record $1.6 million.

Orlando traded $900,000 in guaranteed allocation money plus more based on performance in the deal for Dwyer, who recently got his first call-up for the U.S. national team after becoming a citizen.

Sporting Kansas City coach Peter Vermes praised Dwyer for his play on the field and for being a "tremendous ambassador" for the team.

"How do we replace Dom? I don't know that we do. Go find another player maybe that gives you other strengths that you can work with. But tremendous player and a great guy for our club and that's not going to be easy to replace," Vermes said in a conference call Tuesday after the trade was announced.

Vermes added: "At the same time this is an incredible resource to help us navigate the salary cap over the next so many years."

Dwyer was selected by Kansas City in the 2012 MLS SuperDraft. He ranks second on the team with five goals this season, and he's scored 57 goals over 128 games for his MLS career.

He scored in his national team debut against Ghana this month. He also scored against Panama in the opening game of the CONCACAF Gold Cup.

MLS says the previous record was Orlando's trade of Kevin Molino to Minnesota United for $650,000 in allocation money.

"Our group has worked hard to find potential additions to the Club and we are thrilled to finalize this deal and add an important piece to the roster in Dom," Orlando City CEO Alex Leitao said in a statement. "Dom is a fantastic player who recently gave us a glimpse of what he is capable of with the U.S. Men's National Team and will keep doing so with the Club and at the MLS All-Star game next week."

Dwyer, 26, is married to women's national team forward Sydney Leroux, who plays for FC Kansas City of the National Women's Soccer League. The couple lives with their infant son Cassius in the Kansas City area.

Dwyer and Leroux are the first husband-and-wife duo to each score for the U.S. national soccer team. They are just the fourth married couple to play for the United States, joining Jim Gabarra and Carin Jennings, Claudio Reyna and Danielle Egan and Zach Loyd and Casey Nogueira. Egan's only goal was in 1993, four years before she married Reyna.

Born in England, Dwyer came to the U.S. as a college student, playing at Tyler Junior College in Texas before transferring to South Florida for the 2011 season. He was the 16th overall pick for Sporting Kansas City in the 2012 draft and has 67 career goals across all competitions for Sporting KC.

He became a U.S. citizen in March, paving the way to a spot on the national team.

Vermes said he was confident that the incentives that bring the deal to $1.6 million would be met.

He said he could not comment specifically on reports that Sporting was trying to bring back striker Krisztian Nemeth, who reportedly wants to return to MLS. Kansas City would have to acquire the top allocation spot from the Columbus crew.

Vermes emphasized the roster is fluid and the team is always looking at players.

"The question is whether or not we'll be able to get a deal done in short term or if it is going to be in the next window," he said.