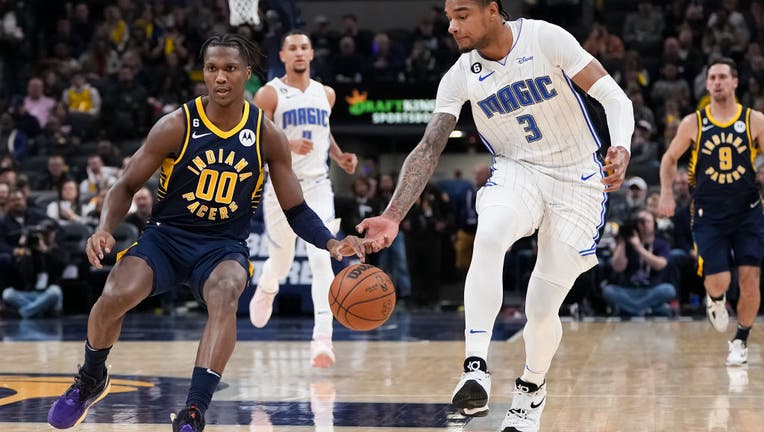 INDIANAPOLIS, INDIANA - NOVEMBER 19: Chuma Okeke #3 of the Orlando Magic steals the ball from Bennedict Mathurin #00 of the Indiana Pacers in the first quarter at Gainbridge Fieldhouse on November 19, 2022 in Indianapolis, Indiana. NOTE TO USER: User

INDIANAPOLIS (AP) - Bennedict Mathurin scored 22 points to lead the Indiana Pacers to a 123-102 rout of the Orlando Magic on Monday night.

Tyrese Haliburton had a double-double with 18 points and 14 assists as Indiana won its fifth consecutive game. T.J. McConnell, who had missed his four 3-point attempts in his first 14 games was 3-for-3 from behind the arc en route to 19 points. He also had 10 assists.

The Pacers shot 50% from the field while the Magic hit 42.4%. Indiana led 54-45 at the half and increased the lead to 86-67 after three. The game was a contrast to Saturday night’s game where the Pacers had slipped past the Magic 114-113 in the first of back-to-back home games.

Pacers: Andrew Nembhard was sidelined with a bruised left knee. … Tyrese Haliburton was named Eastern Conference Player of the Week. He averaged 21 points and 11 assists to help Indiana to three wins.