FOX has produced a documentary about the life and career of legendary NFL coach and broadcaster John Madden.

The sports world is mourning football icon John Madden, who passed away Tuesday at the age of 85.

His death came just two days after FOX aired "All-Madden" a documentary on the life of the coach, TV commentator and video game personality. In honor of Madden’s contributions, FOX will air encore presentations of the film across its networks.

"We are heartbroken by the passing of our great friend, colleague and cornerstone John Madden," FOX Sports CEO Eric Shanks said. "On behalf of the entire FOX Sports family — past, present and future — we will forever be part of John’s team."

The film was co-directed by Tom Rinaldi and Joel Santos, who said they jumped at the opportunity to tell Madden’s story.

"John Madden is an American original, from the sideline to the broadcast booth and far beyond, with a career that reaches into the heart of our country’s popular culture," Rinaldi said in a news release prior to the film’s premiere. "We're honored to celebrate his enduring legacy with this documentary tribute."

Madden’s playing career was cut short by an injury. But his coaching career is legendary. 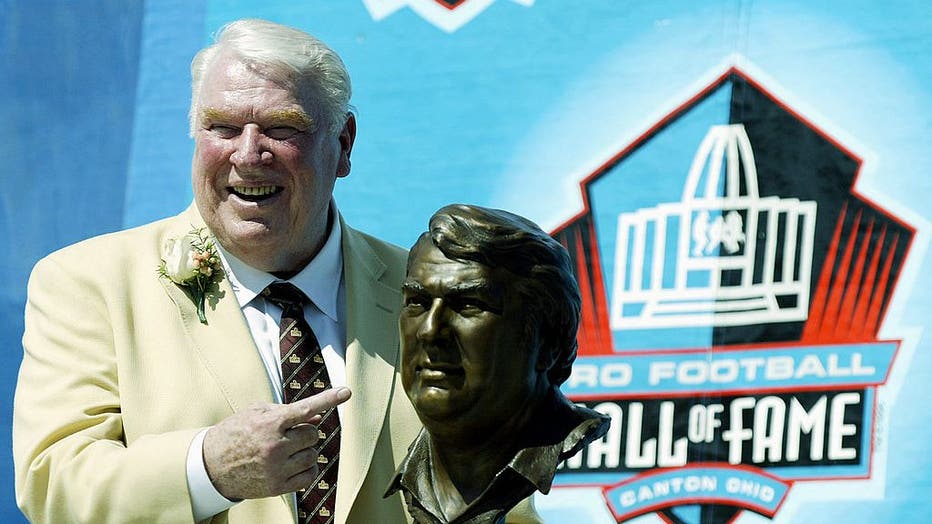 John Madden, former coach of the Oakland Raiders for 10 seasons, poses with a bust of himself during his induction into the Pro Football Hall of Fame on Saturday, Aug. 5, 2006, in Canton, Ohio. (Photo by Jay Laprete/Bloomberg via Getty Images)

Madden won 102 games while only losing 32. He won Super Bowl XI with the Raiders and was named the AFL coach of the year in 1969.

He entered the broadcast booth in 1979 and had collected 16 Emmy Awards by the time he called his final game. And since 1988, he’s been the namesake of one of the most successful and popular video game franchises of all time.

When news of his death went public, tributes poured in from the industries Madden impacted. The National Sports Media Association offered condolences to the Madden family.

The Raiders said, "few individuals meant as much to the growth and popularity of professional football as Coach Madden, whose impact on the game both on and off the field was immeasurable."

EA Sports, who produces the Madden NFL video game, called Madden a hero and offered sympathies to his family, friends and fans.

"His knowledge of the game was second only to his love for it, and his appreciation for everyone that has ever stepped on the gridiron," EA Sports said. "A humble champion, a willing teacher, and forever a coach."