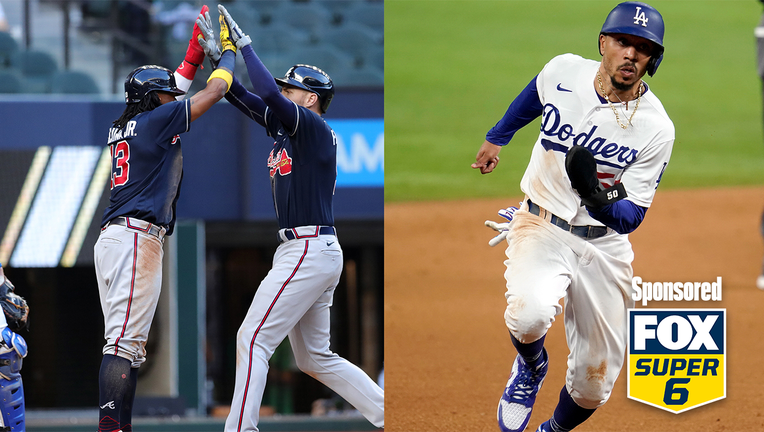 The Atlanta Braves and the Los Angeles Dodgers face a turning point game on Wednesday night in Game 3 of Major League Baseball’s National League Championship Series. And you can end up being the biggest winner of them all.

With the FOX Super 6, you could win up to $25,000 by correctly answering six questions about the game, which will be seen at 6:15 p.m. Wednesday on FS1. Just download the FOX Super 6 app on your phone and mobile device, make your picks before first pitch and watch the action.

The Braves lead the best-of-seven series by a 2-0 margin after an 8-7 victory on Tuesday evening. Atlanta is looking to make it back to the World Series for the first time since losing the 1999 World Series to the New York Yankees. The Dodgers are trying to make a third appearance in the Fall Classic over the past four years, trying to end a 32-year drought since its last World Championship in 1988.

Here are some of the questions that you could win on FOX Super 6:

How many hits will Mookie Betts have?

The answers range from zero hits to six hits for the Dodgers outfielder. Betts entered play on Wednesday with two two-hit games in Los Angeles’ seven post-season games. If the Dodgers are going to battle back in the series, they will need Betts to come up big.

Think you know how many hits Betts will have in Game 3? Make your picks in FOX’s Super 6 contest and you could win $25,000. Download today.

Who will hit the first home run of the game?

Freddie Freeman of the Braves has hit the first homer of the game in the first two contests of the series. With the Dodgers now being the road team and hitting first in the next three games, don’t be surprised if Betts or Corey Seager get that honor. The Braves are represented by Freeman, Ronald Acuna and Marcell Ozuna. Any other player or none is the final option.

You can hit a home run with FOX’s Super 6 contest, where you could win $25,000 with six correct picks. Download the app today.

In what inning with the first pitching change occur?

The options are third inning or sooner, fourth, fifth, sixth, seventh or eighth inning and later. Atlanta starter Kyle Wright has gone at least six innings in his last four starts. Dodger starter Juan Urias is making his first start since Sept. 17 and has been coming out of the Los Angeles bullpen.

Make the call on the FOX Super 6 app and you could win $25,000 with six correct picks. Download the free app today on your phone or tablet.

How many batters will the Dodgers starting pitcher strike out?

In eight innings this season, Urias has recorded 11 strikeouts while only walking one hitter. In 55 innings during his 11 outings, Urias has struck out 45 hitters.

How many runs will be scored after the 6th inning?

In Game 2 on Tuesday night, the two teams combined to score nine runs from the seventh inning onward.  That’s after the Braves scored four in Game 1 to break open a tie game in the ninth. (The totals are 0-1, 2, 3, 4, 5 and 6).

Run to your phone and make your selection for FOX’s Super 6 with a chance to win $25,000. It’s free and it’s easy to play. Get in the game today.

Choose team to win and by how many runs?

The most important question of the night and the easiest to explain. Will we have another late-inning explosion by the Dodger bats? Or can pitching take over the series and push Atlanta to the brink of the World Series.