Battling to make the cut at Arnold Palmer Invitational

Viktor Hovland had the lowest round of the day with a 6-under 66 and is off to another great start at the Arnold Palmer Invitational. This time, he has a good idea what to expect on the weekend at Bay Hill.

ORLANDO, Fla. (AP) - Viktor Hovland had the lowest round of the day with a 6-under 66 and is off to another great start at the Arnold Palmer Invitational. This time, he has a good idea what to expect on the weekend at Bay Hill.

Rory McIlroy got a sneak preview.

Hovland played Friday morning and set the target on a warm day with increasing wind, making seven birdies and a few key pars saves late in the second round. He posted a 9-under 135.

McIlroy played in the afternoon and was poised to catch him until his putter let him down on greens that were getting crisp and slippery. Tied for the lead, McIlroy missed a 4-foot par putt, putts from 8 feet on the next two holes for birdie and par, and he finished off his 72 by missing a good birdie chance from 15 feet.

He was two behind along with past Bay Hill winner Tyrrell Hatton (68) and Talor Gooch (68), who won his first PGA Tour title in the final official event last year.

Hovland was two shots out of the lead going into the weekend last year when he closed with rounds of 77-78 and wound up 15 shots behind.

"I kind of try to forget the weekend here last year," he said. "I played really well the first few days, very similar to how I played so far this year. The course just gets harder and harder every single day, and it started blowing. A few too many bad swings and I ended up in bad spots and just didn’t really take my medicine."

McIlroy opened with a 65 in slightly softer conditions Thursday morning and it didn’t take long for him to realize how much the course had changed. He bogeyed the opening hole and did well to battle back with three birdies. 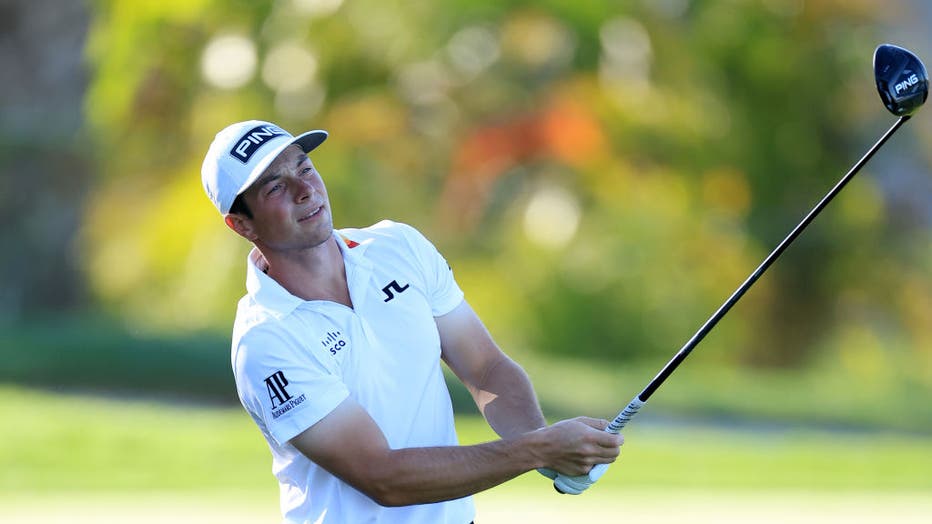 ORLANDO, FLORIDA - MARCH 04: Viktor Hovland of Norway follows his tee shot on the par 5, 12th hole during the second round of the Arnold Palmer Invitational presented by Mastercard at Arnold Palmer Bay Hill Golf Course on March 04, 2022 in Orlando, F

And then it was a diet of pars until those dried up. He was seven shots worse, and said it didn’t feel that way.

"Those are the sort of greens you expect to see late on a Sunday, not late on a Friday," McIlroy said. "It’s going to be interesting to see where they go from here, but it’s going to be a good test over the weekend. I’m glad I got 18 holes in those conditions because the course definitely changed a lot from when I played it yesterday morning to this afternoon.

"I’ll be a little more prepared for it tomorrow."

As for Hatton, he wasn’t sure what to think except that he putted well. That much was evident from his 22 putts. He won two years ago — the last PGA Tour event before the COVID-19 pandemic shut down golf for three months — and does have a good feel for the greens. That’s about the only part of his game that felt right.

"I’m not particularly happy with how I hit the golf ball the last few days," Hatton said. "I think the score is pretty flattering. I’ve putted really good, which is why I’ve got the score that I have, but I know that I can’t keep hitting it that badly certainly with it’s going to be playing much tougher this weekend.

"Hopefully, I can find a golf swing, and hopefully the putt stays up this weekend."

Gooch didn’t drop a shot until his final hole. Still, it was a stout performance considering he played in the afternoon. His round included a 40-foot eagle putt down the slope on the par-5 16th, and he was rarely out of position until going from thick rough right of the ninth fairway to the front bunker, leaving himself nearly 40 yards from the back pin.

Bay Hill was such a test that Jon Rahm still couldn’t find his groove with the putter and was one shot outside the top 10. He had a 70 and was among those seven behind.

The cut was at 3-over 147, the sixth straight year it was over par.

Patrick Reed missed it by one shot, his third straight tournament missing the cut. That hasn’t happened to Reed since 2017. Seven players shot 80 or higher.

Hovland had no such concerns, and he was particularly good on the back nine when he ran in a 25-foot birdie putt on the 15th, two-putted for birdie on the 16th and then smashed a 5-iron from 230 yards to 10 feet on the par-3 17th for a third straight birdie.

McIlroy, who had 30 putts, was told that Hovland needed only 23 putts and Hatton only 22. He had the same response to both questions, knowing all of them would be playing late.

"See how he does tomorrow."

DIVOTS: The field for The Players Championship was released Friday and Phil Mickelson is not in the field for the first time since 2003. Mickelson has said he needed time off after his disparaging comments regarding a proposed Saudi-funded league and the PGA Tour. Also missing The Players are Tiger Woods, Steve Stricker and Harris English, all due to injuries and various stages of recovery.