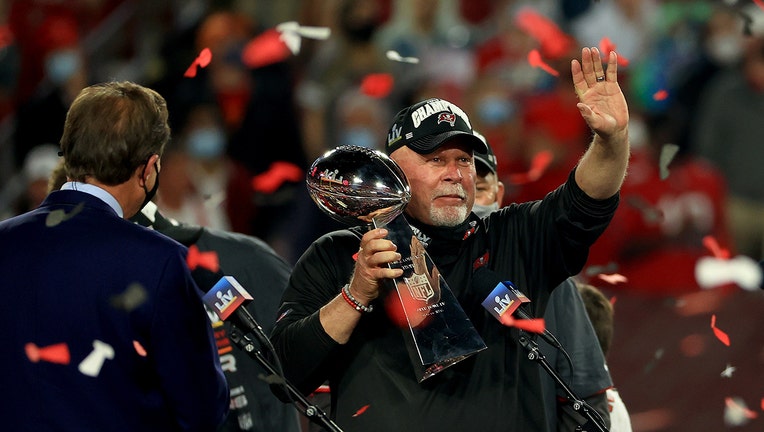 TAMPA, Fla. - The morning after Bucs fans learned that head coach Bruce Arians will be stepping down, it was announced he will be honored for his time with the team. Arians’ name will be joining the Ring of Honor.

During a Thursday press conference, the Bucs owner, Joel Glazer, made the announcement.

"You’re in the Ring of Honor," said Jason Licht, the general manager, "but you should be in the Hall of Fame"

Tom Brady was also in attendance during the news conference. Now, the legendary quarterback will be playing for Todd Bowles after the defensive coordinator was promoted as the coach’s successor.

Arians, a two-time cancer survivor, stepped down as coach of the Arizona Cardinals due to medical concerns in 2017, only to be lured back to the sideline by the then-struggling Bucs two years later. This time, he said, he exits feeling the best he has in "many years" and is looking forward to transitioning into a front-office position working with general manager Jason Licht.

"It’s been a great ride, thank you," Arians said Thursday.

Arians, who will turn 70 this coming season, coached the Bucs to the Super Bowl title in the 2020 season — Brady’s first with Tampa Bay. The Bucs were 31-18 in Arians’ three seasons there and he was 80-48-1 in eight years as a head coach overall when adding in five seasons with the Cardinals from 2013 to 2017.

Arians will be stepping into a new role as the team's Senior Football Consultant, according to team officials.