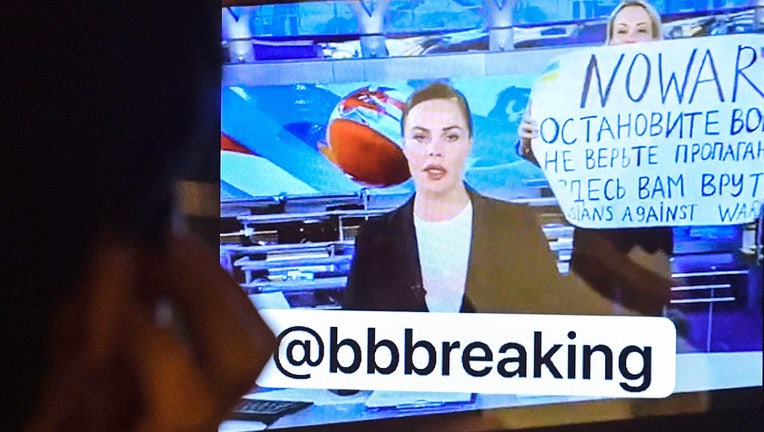 A man looks at a computer screen watching a dissenting Russian Channel One employee entering Ostankino on-air TV studio during Russia's most-watched evening news broadcast, holding up a poster which reads as "No War" and condemning Moscow's military

A woman went viral on Monday for crashing a newscast on Russian-state television to protest the war in Ukraine.

During the evening broadcast on Channel One Russia, the most prominent news network in the country, a demonstrator with a sign rushed onto the set standing behind the anchor and chanted in Russian, "No to war! Stop the war!"

Her sign read in Russian, "Stop the war! Don’t believe propaganda! They’re lying to you here!" with "Russians against war" written in English.

The broadcast immediately cuts away to a pre-recorded report. The anchor, Ekaterina Andreeva, is seen as an iconic figure in Russian media.

The woman, identified as Channel One editor Marina Ovsyannikova, released a video statement before her stunt to denounce Russian President Vladimir Putin.

"What’s happening in Ukraine is a crime and Russia is the aggressor. And there is only one person responsible for this, this man is Vladimir Putin," Ovsyannikova said in Russian. "My father is Ukrainian, and my mother is Russian, they have never been enemies, and this necklace is a symbol – that Russia must immediately stop this war and our brotherly nations can still come together."

"Sadly, I’ve been working on the First Channel during last couple of years, have been doing Kremlin propaganda, for which now I am very ashamed," Ovsyannikova said. "I am ashamed that I let lies be spread on television, I’m ashamed that I participated in turning Russian people into zombies, we kept quiet when it all started in 2014, we did not rally when Kremlin poisoned Navalny, we have silently been watching this anti-human regime, and now, the whole world turned back to us, next 10 generations will not be able to get rid of the shame of this war."

Channel One released a statement saying it was investigating the incident.

As highlighted by Kevin Rothrock of the Russian-English-language independent outlet Meduza, Ovsyannikova faces misdemeanor charges and that can possibly result in a "few days in jail" rather than a prison sentence, according to a report by Russian-state news agency TASS.

Ovsyannikova's "bravery" was hailed on social media, many comparing her to the iconic "tank man" protestor who famously stood in front of military tanks in Tiananmen Square to protest China in 1989.