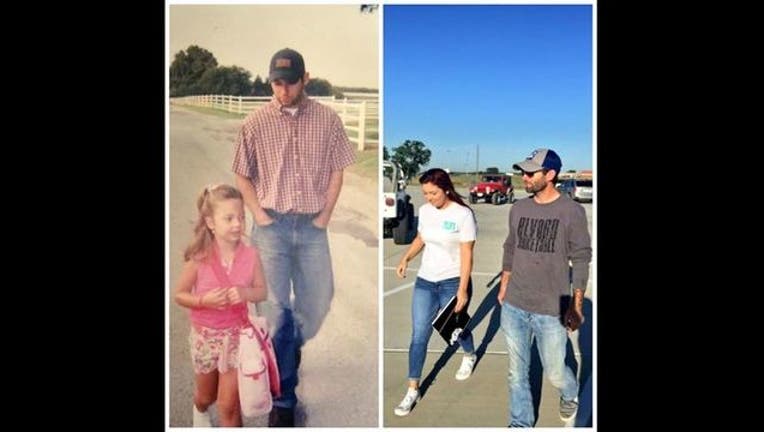 ALVORD, TEXAS - He was there by her side walking her to her first day of kindergarten. 13 years later, a dad and his daughter recreated the touching moment as he walked beside her on her last day of high school.

Since Brittany Gayler of Alvord, Texas posted the side-by-side "then and now" photos on May 25, the images have gone viral.

People far and wide were moved and responded with comments about the sacred and loving nature of fatherhood.

One person wrote, "This is very sweet. This one example of the importance of fatherhood."

Another Twitter user said, "A fathers love is great he will b there when ur happy, sad, scared..."

There was another common theme that ran through the thread of responses. Many noted that 13 years later, Jason Gayler hasn't aged a bit.

In fact, one person responded, "Why did he get younger?"

Many made references to “Benjamin Button,” the movie in which Brad Pitt's character ages in reverse.

The Gaylers say they have been overhwhelmed by the widespread response from the tweet.

"My husband and daughter feel extremely honored to have been able to touch the lives of so many with such a simple tweet," mom Jamie Gayler told KTVU. "They've been able to remind people the importance of slowing down and embracing special moments," she added.

Jamie also notes that they have always been a very close knit family and that her daughter and husband "truly do have a special connection... he's her go-to many times for guidance and advice."

The two photos capture the bookends of a period that many parents would recognize as a precious, fleeting time during the journey through parenthood.

"They grow too fast." "It happens in the blink of an eye." All adages that have been used time over by parents who are trying to grasp truly how quickly it all seems to happen.

In pictures, this father and daughter illustrated the passing of time and how so much can change, yet at the same there are some things that will always remain-- that connection and bond between a child and her parent.

And by the viral response, it is a sentiment to which many can relate.

On Twitter, one person sent her good wishes with this: "You are a lucky girl... The world is yours now. Work hard, study hard and enjoy all life has for you."