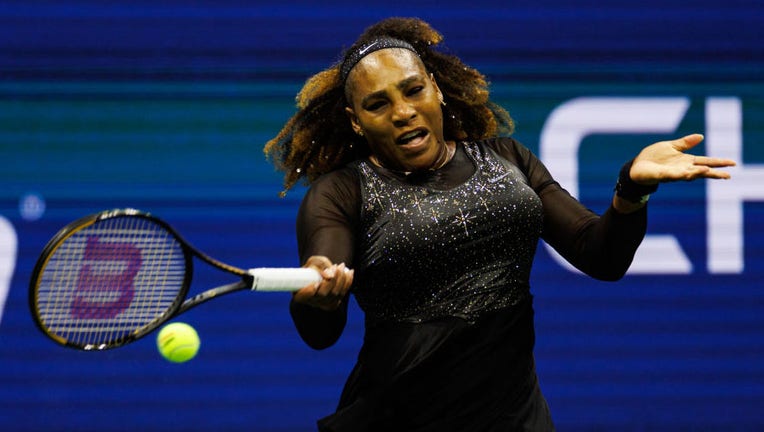 Serena Williams of the United States hits a forehand against Anett Kontaveit of Estonia in the second round of the women's singles of the US Open at the USTA Billie Jean King National Tennis Center on August 31, 2022 in New York City. (Frey/TPN/Getty

NEW YORK - Serena Williams will try to stretch her potential farewell into the last 16, facing Ajla Tomljanovic in a third-round matchup at the U.S. Open.

It's the opening match of the night session at Arthur Ashe Stadium, the same spot from which Williams won her first two matches after saying she was preparing to end her tennis career.

The 23-time Grand Slam singles champion, who will turn 41 this month, would become the oldest woman to reach the fourth round of a major in the professional era, which began in 1968. Top-ranked Daniil Medvedev follows against Wu Yibing, the first man from China to win a U.S. Open match in the professional era.

RELATED: Serena Williams is center of attention at U.S. Open

Imagine if they could bottle a potion called "Just Serena."

That was Serena Williams’ succinct, smiling explanation for how she’d managed — at nearly 41, and match-rusty — to defeat the world’s second-ranked player and advance Wednesday to the third round of a U.S. Open that so far, doesn’t feel much like a farewell. "I’m just Serena," she said, to roaring fans.

Clearly there’s only one Serena. But as superhuman as many found her achievement, some older fans in particular — middle-aged, or beyond — said they saw in Williams’ latest run a very human and relatable takeaway, too. Namely the idea that they, also, could perform better and longer than they once thought possible — through fitness, practice and grit.

"It makes me feel good about what I’m doing still at my age," said Bess Brodsky Goldstein, 63, a lifelong tennis enthusiast who was attending the Open on Thursday, the day after Williams’ triumph over 26-year-old Anett Kontaveit.

Goldstein pursues her passion for the sport more vigorously than most women her age. She plays several times a week and participates in an age 55-and-up USTA mixed-doubles league in New England. (She also plays competitive golf.)

Yet Goldstein, like any athlete, suffers her share of aches and injuries, like a recent knee issue that set her back a few weeks. Watching Williams, she said, shows ordinary folks that injuries — or, in Williams' case, a life-threatening childbirth experience five years ago — can be overcome. "She gives you inspiration that you can achieve your best, even in your early 60s," said Goldstein, who also had high praise for Venus Williams, Serena’s older sister, competing this year at 42.

Evelyn David was also watching tennis at the Open on Thursday, And she, too, was thinking about the night before.

"Everybody is going, ‘WHOA!’" said David, who smilingly gave her age as "older than my 60s" and is the site director for New York Junior Tennis Learning, which works with children and teens. She cited the physicality of Williams' play, and the role of fitness in today's tennis. "The rigorous training that athletes go through now is different," David said. "She’s going, ‘I’m not falling over. I can get to the ball.’"

"A total inspiration," David termed Williams' performance — and she had some prominent company.

"Can I put something in perspective here?" former champion and ESPN commentator Chris Evert said during Wednesday's broadcast. "This is a 40-year-old mother. It is blowing me away."

Evert retired at age 34 in 1989, well before fitness and nutrition were the prominent factors in tennis they are now. They were even less so when pioneering player Billie Jean King, now 78, was in her heyday.

"For us older ones, it gives us hope and it’s fun," King said Thursday in an interview about Williams. "Puts a pep in your step. Gives you energy." She noted how fitness on the tour has changed since the 1960s and 1970s.

"We didn’t have the information and we didn’t have the money," King said. "When people win a tournament now, they say, ‘Thank you to my team.’ They’re so lucky to have all those people. We didn’t even have a coach."

Jessica Pegula, the No. 8 seed who won on Thursday, is at 28 a half-century younger than King. She knows well the difference fitness has made.

"It’s been a huge part of it," she said. "Athletes, how they take care of their bodies, sports nutrition, the science behind training and nutrition — (it) has changed so much. Back in the day, you saw a player drinking a Coke on the sideline or they had a beer after their match. Now ... health has been the No. 1 priority, whether it’s physical or mental." She said she remembered thinking Roger Federer, Rafael Nadal and Williams were all going to retire, but "they kept pushing the boundaries."

Federer, 41, hasn’t played since Wimbledon last year because of operations to his right knee, but has said he'll try to play Wimbledon next year, shortly before his 42nd birthday. And Nadal, 36, known for his intense devotion to fitness, has won two Grand Slam titles this year to raise his total to a men’s-record 22. Nobody would be surprised if he won another major. In contrast, Jimmy Connors’ famous run to the 1991 semis of the U.S. Open when he was 39 was considered an event for the history books.

Of course, fitness is only one building block to greatness — in any sport. Denver Broncos safety Justin Simmons, who like Pegula is 28, noted that even though it's inspiring to see Williams keep an athletic advantage partly through preparation, "not everybody is Serena and Venus Williams. Maybe there’s some genes in there that not everybody else is blessed enough to have, but it’s still cool to know that, hey, even though she is genetically gifted, there are some things that she’s done that have helped her in a tremendous way prolong her career."

"What you see with all of these people is they stay motivated, they’ve avoided catastrophic injury … or they’ve been able to come back because they’ve recovered," he said. Also key: they live in "the modern era of sports medicine."

The question, he asked, is can Williams perform at the same level every other day to win a whole tournament? He hopes so.

Williams fan Jamie Martin, who has worked in physical therapy since 1985 and owns a chain of clinics in New Jersey and Pennsylvania, said she's seeing many women playing vigorous, competitive sports into middle age and beyond. Some return to their sport, or take up a new one, after years of focusing on work or family.

Williams' pursuit of another U.S. Open title at 40 is a reminder that women can not only remain competitive longer, but can compete now for the joy of it, she notes.

Brooklyn teacher Mwezi Pugh says both Williams sisters are great examples of living life on their own terms – which includes deciding how long they want to play.

"The older you are, the more you should be able to set up your life in the way you like, and what works best for you," Pugh said. "That’s what the sisters are doing, and they are teaching all of us a lesson."