WASHINGTON - Ukrainian President Volodymyr Zelenskyy virtually addressed the U.S. Congress on Wednesday in an appeal for the West to do more in Ukraine’s battle against invading Russian forces, calling for a no-fly zone over his country, more sanctions and possibly the facilitation of military aircraft.

Zelenskyy, who spoke from an undisclosed location in Kyiv as Russia bombards his country for the third week straight, cited the attacks on Pearl Harbor and on September 11, 2001, during his emotional address.

"In your great history, you have pages that would allow you to understand Ukrainians, understand us now, when we need you right now," Zelenskyy said in his address. "Remember Pearl Harbor. The terrible morning of December 7, 1941, when your sky was black from the planes attacking you. Just remember it. Remember September 11th, a terrible day in 2001 when ... innocent people were attacked. Attacked from air, yes, just like nobody else expected it. You could not stop it."

He continued: "Our country experiences the same every day, right now, at this moment every night for three weeks now."

Zelenskyy said the U.S. must continue to sanction Russian lawmakers and block imports, and he showed a packed auditorium of U.S. lawmakers an emotional video of the destruction and devastation his country has suffered in the war. 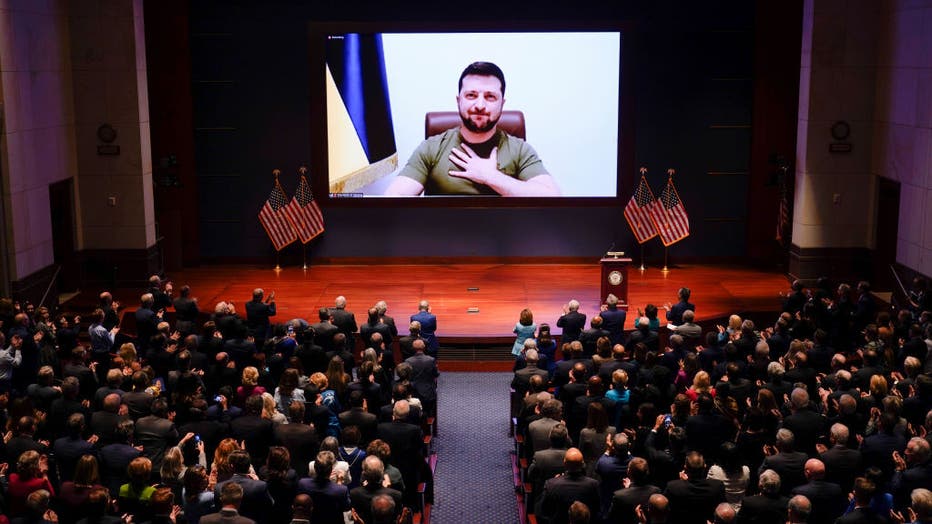 Ukrainian President Volodymyr Zelenskyy speaks to the U.S. Congress by video to plead for support as his country is besieged by Russian forces at the U.S. Capitol on March 16, 2022 in Washington, DC. Zelenskyy addressed Congress as Ukraine continues

Zelenskyy has used his campaign to implore allied leaders to "close the sky" to prevent the Russian airstrikes that are devastating his country. He has emerged as a heroic figure at the center of what many view as the biggest security threat to Europe since World War II. Almost 3 million refugees have fled Ukraine, the fastest exodus in modern times.

Lawmakers gave him a standing ovation, before and after his remarks. He began in Ukrainian through an interpreter but then switched to English in a heartfelt appeal to help end the bloodshed.

Biden is set to also give remarks later Wednesday morning, in which he is expected to announce an additional $800 million in security assistance to Ukraine, according to the Associated Press, citing a person familiar with the matter. That would bring the total announced in the last week alone to $1 billion. It includes money for anti-armor and air-defense weapons, according to the official, who was not authorized to comment and spoke on the condition of anonymity.

Even though Zelenskyy and Biden speak almost daily by phone, the Ukrainian president has found a potentially more receptive audience in Congress — which has been ready to push on economic sanctions and beyond.

"We think the United States needs to do more," said Sen. Roger Wicker, R-Miss., returning from a weekend visit with other lawmakers to Poland.

Congress has already approved $13.6 billion in military and humanitarian aid for Ukraine, and the newly announced security aid will come from that allotment, which is part of a broader bill that Biden signed into law Tuesday. But lawmakers expect more aid will be needed. 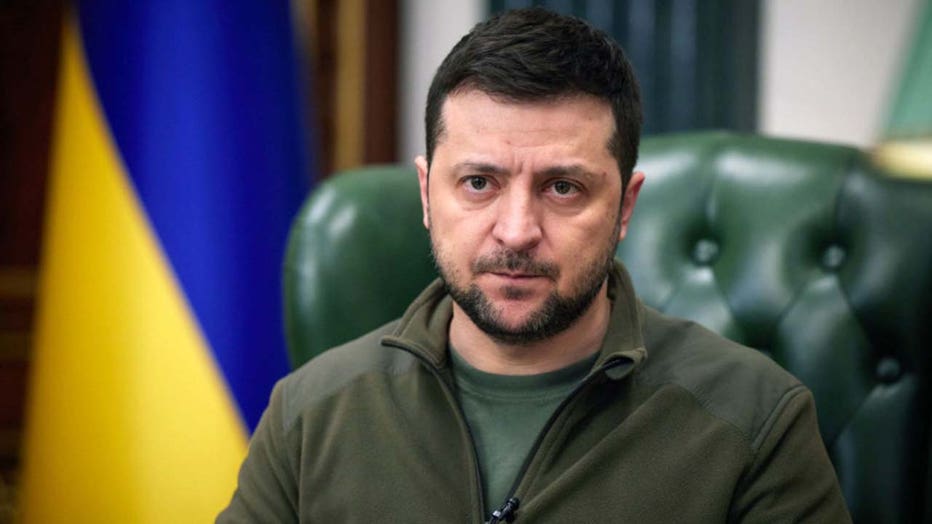 FILE - President of Ukraine Volodymyr Zelenskyy is pictured during his regular address to the nation, Kyiv, capital of Ukraine. CREDIT: UKRINFORM/ Ukrinform/Future Publishing via Getty Images

"We will fight till the end, at sea, in the air. We will continue fighting for our land, whatever the cost," Zelenskyy said, the 13th day since Russia invaded Ukraine, according to an English translation. "We will fight in the forests, in the fields, on the shores, in the streets."

Zelenskyy’s speech echoed that of Churchill’s most famous speech, "We Shall Fight on the Beaches."

Zelenskyy’s address to the British Parliament was historic, marking the first time a foreign leader has ever addressed members of parliament directly in the commons chamber. He received a standing ovation from the members of Parliament ahead of his address.

Before Zelenskyy: Foreign leaders who have addressed Congress

Zelenskyy’s address to Congress was one of many in a long line of traditional receptions that have been held in U.S. history. After the end of World War II, having sessions of Congress to receive foreign leaders visiting the U.S. became standard fare, according to The Washington Post.

Since 1945, leaders such as the late President Nelson Mandela of South Africa, German Chancellor Angela Merkel, and Emmanuel Macron, President of France, have given addresses to Congress, according to the United States House of Representatives History, Art and Archives website.

In 2014, former Ukrainian President Petro Poroshenko called upon the U.S. for help amid Russia’s invasion of the Crimean Peninsula.

Poroshenko came to Washington seeking lethal military assistance to help push back the Russian forces, but then-President Barak Obama argued that pouring more weapons into the conflict would not de-escalate the situation.

Obama’s preferred tactic was imposing costs on Russia, which included multiple rounds of economic sanctions targeting Russia’s energy, defense and financial sectors, as well as penalties on government officials and other individuals close to Putin.

Interestingly, before the end of WWII, only three foreign dignitaries had made addresses to Congress before it became a tradition.

On Dec. 18, 1874, King Kalakaua of Hawaii was received by Congress, on May 20, 1934, Ambassador Andre’ de Laboulaye of France addressed Congress to memorialize the centennial anniversary of the death of Lafayette, and on Dec. 26, 1941, Prime Minister Winston Churchill of the United Kingdom addressed Congress asking then-President Franklin D. Roosevelt for assistance during Germany’s invasion of France.

Churchill would go on to speak to joint sessions of Congress another two times in 1943 and 1952, which makes him one of two foreign dignitaries to achieve this feat. Prime Minister Binyamin Netanyahu of Israel was the only other foreign leader to address Congress three times (1996, 2011, and 2015) thus far, according to the United States House of Representatives History, Art and Archives website.

The most frequent speakers to address Congress have been from close allies France and the U.K. with nine and eight appearances, respectively.