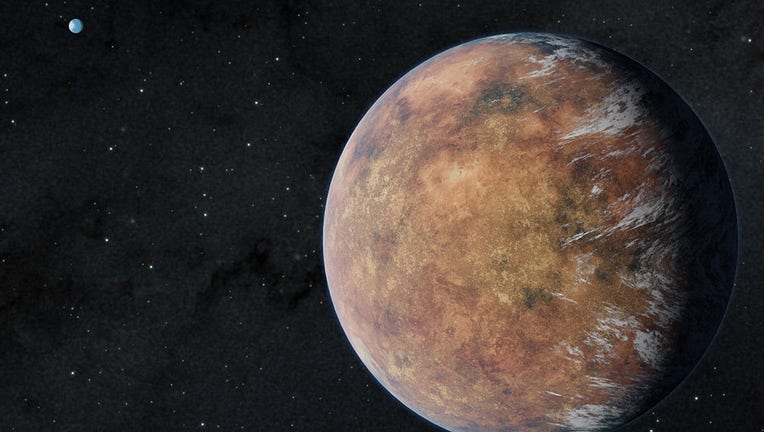 Newly discovered Earth-size planet TOI 700 e orbits within the habitable zone of its star in this illustration. Its Earth-size sibling, TOI 700 d, can be seen in the distance. Credit: NASA/JPL-Caltech/Robert Hurt

Scientists have discovered another Earth-sized world that is orbiting around its star within the habitable zone and could have liquid water on its surface, according to NASA.

The planet, called TOI 700 e, is about 95% of Earth’s size and is likely rocky, the space agency announced in a post on Tuesday.

Astronomers previously discovered three other planets in this system, called TOI 700 b, c, and d. TOI 700 d also orbits in the habitable zone, also referred to as the "Goldilocks zone," as the area is just the right distance from a star where for liquid water to exist on the surface of a planet and conditions are not too hot and not too cold.

The newest TOI 700 e was discovered using observations from NASA’s Transiting Exoplanet Survey Satellite (TESS), a space telescope designed to search for planets outside of our solar system, including those that could support life.

"This is one of only a few systems with multiple, small, habitable-zone planets that we know of," said Emily Gilbert, a postdoctoral fellow at NASA’s Jet Propulsion Laboratory in Southern California who led the work. "That makes the TOI 700 system an exciting prospect for additional follow-up."

Gilbert added that planet e is about 10% smaller than planet d, so the system also shows how more TESS observations "help us find smaller and smaller worlds."

Gilbert presented the findings this month at the 241st meeting of the American Astronomical Association in Seattle. A paper about the newly discovered planet was also accepted by The Astrophysical Journal Letters.

TOI 700 is a small, cool M dwarf star located around 100 light-years away from Earth in the southern constellation Dorado.

In 2020, Gilbert and a team of others announced the discovery of the Earth-size, habitable-zone planet d, which has a 37-day orbit, along with two other worlds.

Astronomers said the planets are probably tidally locked, meaning they spin only once per orbit and one side always faces the star — similar to how one side of the Moon is always turned toward Earth.

NASA said the new TOI 700 e, which may also be tidally locked, takes 28 days to orbit its star, placing planet e between planets c and d in the so-called "optimistic habitable zone."

The optimistic habitable zone is defined by scientists as the range of distances from a star where liquid surface water could be present at some point in a planet’s history. The space agency said finding other systems with Earth-size worlds in this region helps planetary scientists learn more about the history of our own solar system.

This animation shows a Sun-like star orbiting Gaia BH1, the closest black hole to Earth, located about 1600 light-years away. Observations by Gemini North, one of the twin telescopes of the International Gemini Observatory, operated by NSF’s NOIRLab, were crucial to constraining the orbital motion and hence masses of the two components in the binary system, allowing the team to identify the central body as a black hole roughly 10 times as massive as our Sun. (Credit: T. Müller [MPIA], PanSTARRS DR1 [K. C. Chambers et al. 2016], ESA/Gaia/DPAC).

TESS's original two-year survey mission ended in 2020 by imaging about 75% of the starry sky. But the mission expanded, completing an additional year of observations — which led to the most recent planet e discovery.

"If the star was a little closer or the planet a little bigger, we might have been able to spot TOI 700 e in the first year of TESS data," Ben Hord, a doctoral candidate at the University of Maryland, College Park and a graduate researcher at NASA’s Goddard Space Flight Center in Greenbelt, Maryland, said in a statement.

"But the signal was so faint that we needed the additional year of transit observations to identify it," Hord added.

So far, TESS has found 66 new exoplanets, as well as nearly 2,100 candidates astronomers are working to confirm.

"As it enters its extended mission, TESS is already a roaring success," said Patricia Boyd, the project scientist for TESS at NASA's Goddard Space Flight Center in Greenbelt, Maryland.

RELATED: Celestial events to look out for in 2023