How Macy's makes sure their balloons fly high on Thanksgiving

Almost nothing in the parade’s nearly 100-year history has stopped the balloons from being brought to life, save for one exception.

It's a beloved sight: Kermit the Frog, Mickey Mouse, Snoopy and many other colorful, giant balloons floating down the streets of New York City.

Over the past century, Macy’s Thanksgiving Day Parade has become as much a part of the Thanksgiving holiday as the turkey dinner, with balloons serving as the main attraction.

Almost nothing in the parade’s nearly 100-year history has stopped the balloons from being brought to life, save for one exception.

It wasn't the Great Depression nor a global pandemic – but rather when the world was brought to a halt by war. 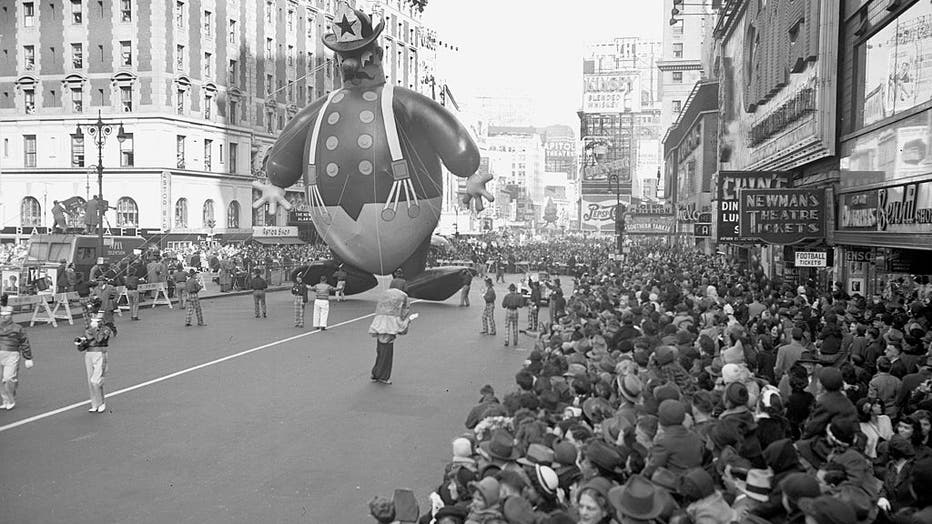 A helium-filled fireman who doesn't have any need for a ladder surveys with a discerning eye the thousands gathered in the Times Square area to see the annual Thanksgiving Day parade sponsored by Macy's. (Photo by Art Whittaker/NY Daily News Archive

In 1924, the Macy’s department store in New York City decided to try something new.

"All of those employees and colleagues came together and wanted to celebrate and give back to the community," said Rick Pomer, the Creative Director for Macy’s Parade Studio. "So, they hosted the very first parade."

With the Roaring 20s as its backdrop, the first parade was quite the sight with floats and live animals. However, there was one notable absence: balloons. 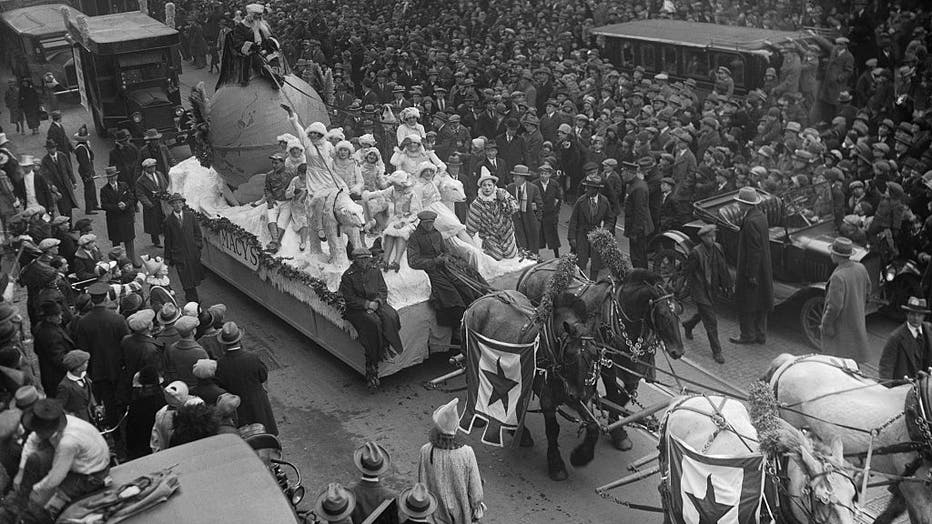 Santa Claus rides a parade float pulled by a team of horses down Broadway Street during the annual Macy's Thanksgiving Day Parade in New York City. via Getty Images

According to Pomer, the balloons came about sometime after, having been inspired by parade puppets or "giant heads" worn by participants in the first few parades.

"At the time, the operators of the parade saw that people react to that scale of characters, and how can we do it even better, even bigger," said Pomer. "That's why, year after year, we developed new ways to do that with balloons."

The first balloons were initially filled with air and propped up with sticks. It was only later that the balloons became filled with helium, which allowed them to float higher than ever before. 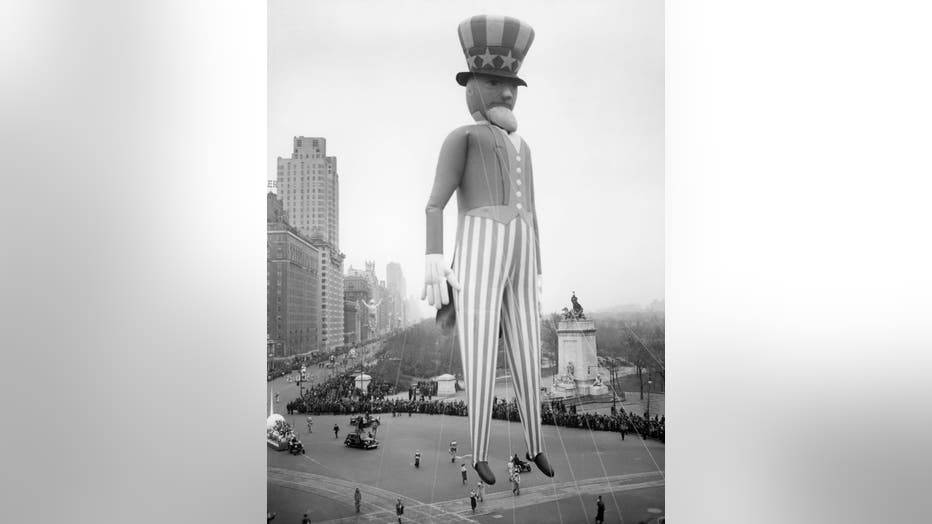 This heroic figure of our own Uncle Sam was the hit of the Macy Thanksgiving Day Parade that provided entertainment today for New Yorkers who were aboard to sharpen up appetites for the annual Turkey spread. This photo was made as the parade passed C

After nearly 20 years in operation, Macy's Thanksgiving Day parade festivities ended. World War II was escalating, and starting in 1942, the parade was canceled for three years in a row.

According to Pomer, the cancelation was due to resources being put toward the war effort.

Two of those resources were important components of Macy's Thanksgiving Day parade: helium, the gas used to fill up the parade balloons, and rubber, the material used to create the balloons at the time.

While important components of the parade, helium and rubber were also important for military purposes.

Helium is a national strategic reserve material, according to the American Chemical Society, and the gas was used to fill blimps that were vital in World War II. Rubber, another key material, became difficult to come by as the natural rubber supply from Southeast Asia was blocked at the beginning of the war.

Because of these factors, Macy’s President Jack Straus announced from the steps of New York City's City Hall that the parade was taking a backseat to the war, according to Macy's. During this announcement, Straus deflated a green dragon balloon and then donated the rubber from the balloon to the U.S. military. 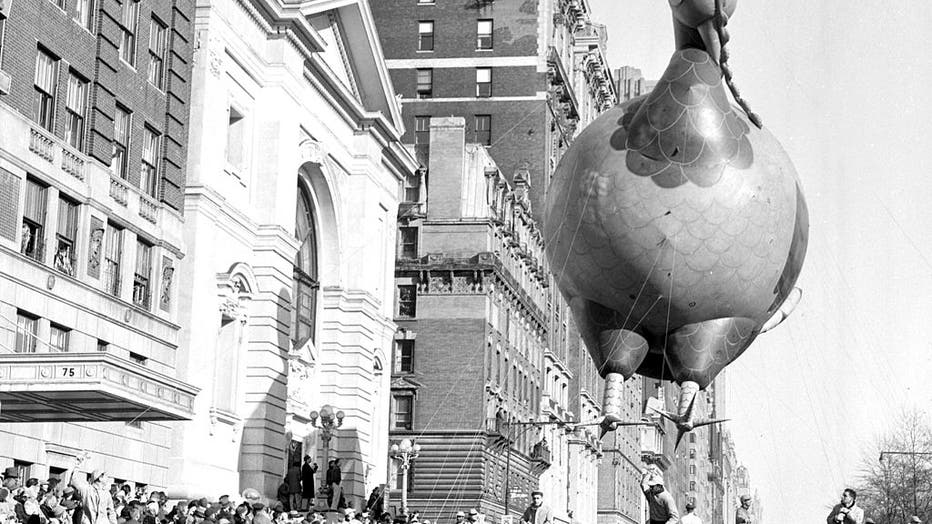 Big bird Turkey "Gorgeous Gobbler," one of the balloon stars in Macy's Thanksgiving Day parade was moving along well. A million fans lined Our Town's streets to watch the fun. (Photo by Hal Mathewson/NY Daily News Archive via Getty Images)

After World War II ended in 1945, Macy’s Thanksgiving Day Parade ramped back up and expanded. Parade organizers added nine new balloons to the line-up that year, and about two million people descended on the Big Apple’s streets to watch the parade.

In the decades since, parade organizers added even more balloons, the balloons themselves grew in size and complexity, and the parade started becoming televised, allowing people outside of the city to see the parade.

As the parade has grown, it has also persisted in the face of other wars, and worldwide tragedies – not even the global COVID pandemic could stop the parade.

"It really does take something monumental to even shift what we do," Pomer said. "If we've lived through a pandemic and produced the parade, I think we're good, right?"

According to Pomer, what makes the Macy’s Parade special is that it’s part of the tradition for many families across the U.S.

"It's that connective tissue of the holiday and that togetherness that everyone so craves," said Pomer.

The parade is particularly special for Pomer and his colleagues that organize the event.

"It is my favorite day of the year, not only because we're actually living the end of an entire year of putting this together, but that moment, that adrenaline that you feel and the spirit of the crowds right before we step off – if you could bottle that up and sell it, it would be an amazing thing," said Pomer.

"Really, it is just pure joy and celebration that keeps us going," he added.