VALRICO, Fla. - A terrifying encounter was caught on camera at a Hillsborough County convenience store. Surveillance video shows a man pointing a gun directly at an employee's face, demanding that she open up the register.

The crime happened Saturday night at 10:50 p.m. at the Shell Gas Station on 4330 Lithia Pinecrest Road. It started like any other encounter with a customer.

"How are you?" the employee asked as the suspect walked into the store.

Seconds later, he was behind the counter, grabbing a container of rolled coins and ordering the worker to open the register.

She tried to explain, "I can't open the register."

The suspect got angry, pulled out a gun and aimed it at her face.

A terrifying encounter was caught on camera at a Hillsborough County convenience store. Surveillance video shows a man pointing a gun directly at an employee's face, demanding that she open up the register.

"Open it now," the suspect answered.

"I can't open it," the worker insisted.

"Open it now!" the suspect yelled.

Then he pointed the gun at a nearby display shelf and pulled the trigger. 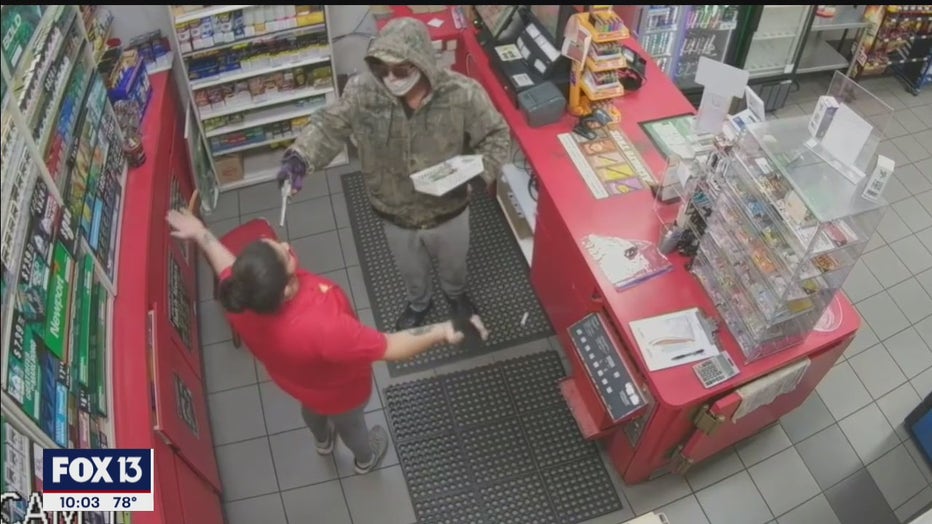 "Now! Open it! The next one's for you," the suspect yelled.

When the worker finally got the register to open, the man dug through the drawer, grabbed some cash, and took off with a few parting words.

"You have a good day," the man said as he walked out the door.

"You won't go too far," the worker replied.

Hillsborough County Sheriff's Office spokesperson Natalia Verdina said, "She was able to just seem very collected given the situation but she did the right thing, stepping aside and letting him do what he needed to do and just saving her own life."

After seeing the surveillance video, workers at neighboring businesses said they are just thankful no one got hurt.

"We see her all the time going into the store," said Hailey Vangelder who works at Lil Buddha Vapor & Smoke Shop. "Hearing about it was pretty crazy because, you know, it could have happened here, as well."

One challenging factor is the suspect's description; he was wearing a mask, hoodie and a hat. He's believed to be between the ages of 17 and 20 with a medium build. Investigators say he got into a vehicle that drove north on Lithia Pinecrest Road.

They hope someone recognizes the suspect -- or maybe even his voice -- so they can get him off the streets.

"His behavior is disturbing and ruthless and we need to hold him accountable," Verdina said.

FOX 13 News spoke with the worker in the surveillance video and she says she's doing fine. She's actually thankful she was working when the suspect came through the door. Her 18-year-old daughter was supposed to be working that night, but they had switched shifts.

The owner of the Shell Gas Station said he's proud of how his employee handled the encounter and he's grateful for all the support they've gotten from the community.

Anyone with information on this case, the suspect's identity, or his whereabouts, is urged to contact the Hillsborough County Sheriff's Office at 813-247-8200.