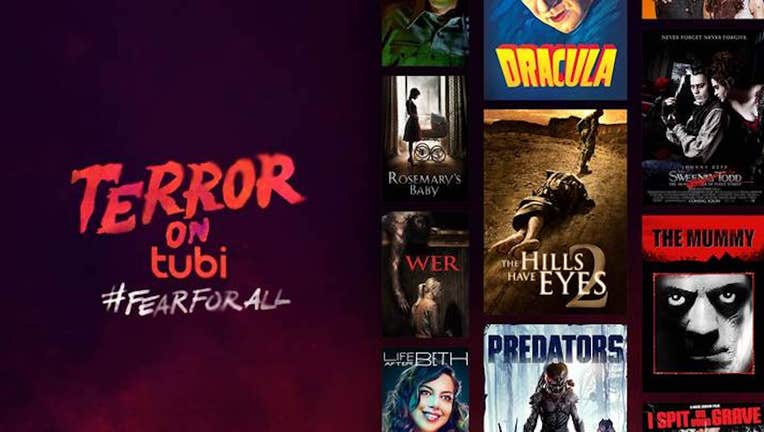 CHICAGO - It’s still September, but BOO! Tubi has already jumped out of the bushes wearing a scream mask and clutching a press release.

FOX Entertainment’s free streaming service has announced the impending arrival of "Terror on Tubi," a collection of more than 5,000 horror and paranormal titles that will sneak, stalk and slither onto screens across the U.S., Canada, Mexico and Australia.

"Tubi viewers devour horror titles all year long so we've made 'Terror on Tubi' extra enticing," Tubi's Chief Content Officer, Adam Lewinson, said in a press release. "With more than 5,000 horror and paranormal titles and four bone-chilling originals, Tubi ramps up its position as a formidable force in horror."

RELATED: ‘Malignant’ review: Many horror movies in one, for better and worse

Rob Wade, FOX Entertainment’s president of alternative entertainment and specials, added the following: "We’re thrilled to be premiering our first FAE Tubi original titles on the platform with the inaugural ‘Terror on Tubi’ celebration. We look forward to continuing to bring original content that not only draws in new audiences with the bold programming that has long been synonymous with FOX, but that also reflects the genres and entertainment Tubi’s streaming audiences love most."

You’ll find more about the four Tubi Originals below. In addition, Terror on Tubi will play home to a collection of thousands of creepy viewing hours, including the Aubrey Plaza-starring "Life After Beth," blood-spraying musical "Sweeney Todd: The Demon Barber of Fleet Street," "I Spit On Your Grave" and its sequel, classics like the 1931 "Dracula" and the 1932 "The Mummy," and the "Buffy the Vampire Slayer" film, which preceded the beloved series.

It’s a diverse roster, and the same is true of the slate of Tubi Originals. Here’s more detail on those:

But viewers need not wait for October to start the scares flowing. Next week we’ll be diving into some of the great alternative horror classics currently available on the service, including "Jennifer’s Body," "The Descent" and "Slither," to name a few.

Summon some early scares with "Candyman," now streaming for free on Tubi

Candyman (1992): August saw the arrival of Nia DaCosta’s "Candyman," a "spiritual sequel" to the 1992 original from director Bernard Rose. Seeing this film isn’t a prerequisite for enjoying its descendant, but the ties between DaCosta’s film and Rose’s are robust. "Candyman" is currently number-one at the box office (racking up $22.3 million in North America in its first weekend in theaters), but it will cost exactly zero dollars to see its predecessor, and your experience with both films will be greatly enriched. Rated R. 99 minutes. Dir: Bernard Rose. Featuring: Virginia Madsen, Xander Berkeley, Tony Todd, Kasi Lemmons, Vanessa Williams, Ted Raimi.