TAMPA/LAKELAND (FOX 13) - Law enforcement officers from Hillsborough and Polk worked across county lines to take down a teen carjacking suspect and his accomplices Friday afternoon.

Officers and deputies were able to end the incident within hours, but not before a Tampa police officer was involved in a crash while pursuing the suspect's vehicle.

It started Friday morning in Bartow when the suspect appeared in court for an unrelated offense. After court, the Polk County Sheriff's Office says the suspect, Izaih Norgaisse, 15, of Winter Haven, went to Tampa and met two teens, 16 and 17, who were driving a car reported stolen from Osceola County.

Based on a request by the Florida Highway Patrol, Tampa police tried to pull the vehicle over on Interstate 275 near the Howard Avenue exit.

During a short pursuit of the vehicle, the TPD officer crashed and the suspects fled to Interstate 4 and into Polk County.

The three juveniles abandoned the reportedly stolen vehicle in Lakeland when it ran out of gas. Two of them were caught as they fled on foot.

Norgaisse managed to escape for a short time, allegedly offering someone money in exchange for refuge, but was denied.

He then allegedly carjacked a city of Lakeland employee vehicle and was pursued by a Polk County deputy into Winter Haven. After a PIT maneuver forced Norgaisse to stop next to a vacant lot at Avenue T NE, he ran into an occupied home to hide.

That's where he was finally taken into custody. 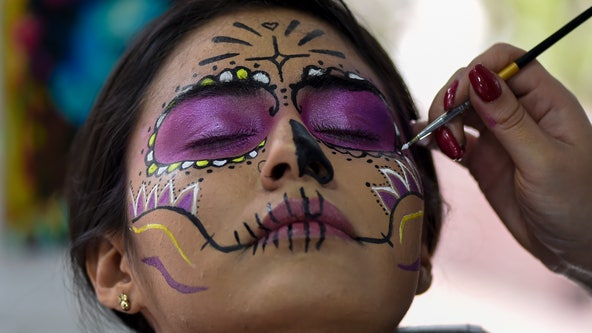