Austin, TX - Seeing a living legend perform in person can be thrilling. Hearing an arena full of people belt out the unforgettable closing refrains of "Hey Jude" in time with Paul McCartney; watching LeBron James soar above a hapless opponent from a seat behind the basket; leaning forward as Sir Ian McKellen begins Shakespeare’s famous "Blow, winds, and crack your cheeks!" speech from "King Lear." Such experiences are singular, unforgettable. But rarer still is the occasion when the legend in question surpasses even your sky-high expectations.

Dolly Parton isn’t just great. She’s the Grand Canyon. You may think you know how incredible she is, but until you see her in person, there’s no way to fully grasp the magnitude of her talents. 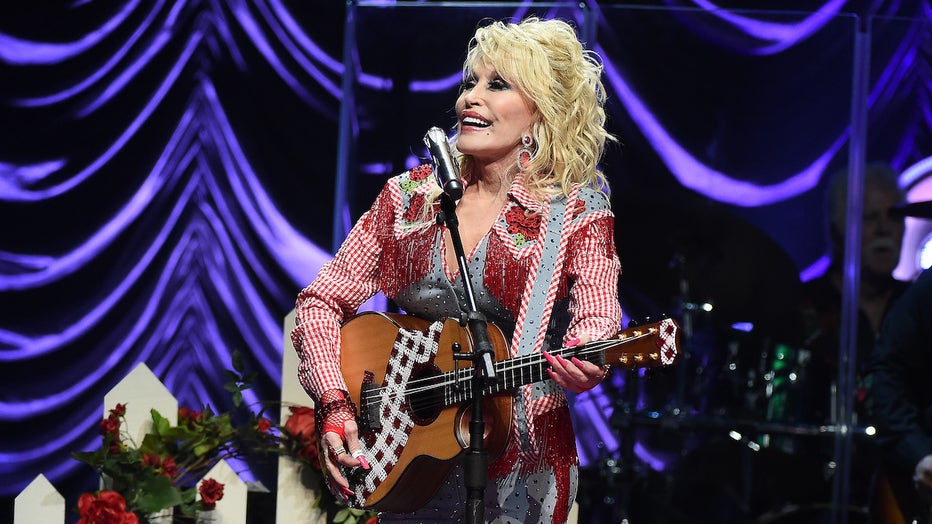 That’s a lot of high-falutin’ language to describe a woman who famously said, "It costs a lot of money to look this cheap." And the singer-songwriter herself would almost certainly wave off such praise. Again and again throughout her first-ever performance at the South by Southwest (SXSW) music festival in Austin, Texas, Parton found ways to ground her extraordinary career and accomplishments in humbler soil. She was just a hillbilly with a dream. (Though "hillbilly" was the word she used, I’m mostly paraphrasing here — who can possibly take notes when you’re at a Dolly Parton concert?)

WATCH FREE ON TUBI: The Dolly Parton Story: From Rags to Rhinestones

She’s only ever wanted to make music and bring people joy, she told the rapt audience at ACL Live at the Moody Theater, where Parton performed to celebrate the launch of the Dollyverse (her audience-centric Web3 collaboration with Blockchain Creative Labs, FOX Entertainment’s NFT Studio). If she sees someone without a smile, she says, "I just give them mine."

And it wasn’t just about the music. Parton was also there to promote the release of her new book "Run, Rose, Run" with juggernaut author James Patterson, which the pair discussed at some length in a lively panel moderated by "Friday Night Lights" star Connie Britton. If the only entertaining thing about that panel had been the custom jacket Parton’s costumer designed for Patterson, that alone would have made it worth watching, but unsurprisingly Dolly the novelist is every bit as charming as Dolly the singer/songwriter/movie star/philanthropist/mogul. (Also very engaging: the surprisingly funny James Patterson, who is evidently just as dazzled by Parton as the rest of the world.) 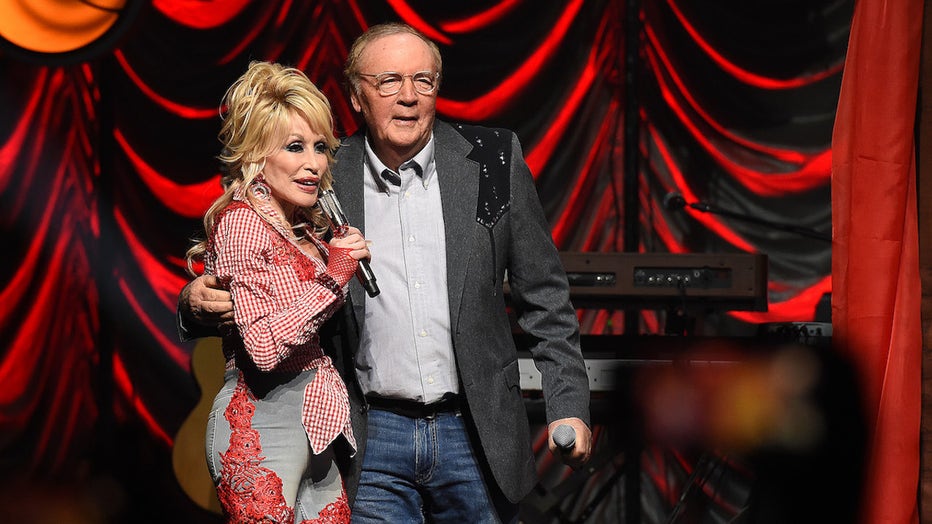 Oh, and Parton also gave us all NFTs, should we wish to scan the BCL-provided QR code and claim ours. What’s an NFT? Well, A), it’s a "non-fungible token," and B), I cannot possibly explain what that means because I don’t understand it myself. I’m not sure Dolly Parton does, either, but she knew they were a way to connect with her fans, and that seems to have been reason enough for her to get interested.

If you’re wondering how good she sounds after decades of performing, the answer is "good enough that fellow FOX critic Caroline Siede and I both thought she was lip-syncing at first." And perhaps Parton, the consummate show-woman, knew that her incredible vocal prowess might give such an impression, because after belting through three catchy songs from the "Run, Rose, Run" companion album and one thrilling rendition of "Jolene," she sang the traditional gospel tune "Precious Memories" a capella, her backup singers joining her for shimmering four-part harmony.

But if you’re familiar with Parton’s discography, you know it’s not all about her warm, resonant singing voice; she uses her speaking voice in her songs to draw people in, connecting her musical prowess with her gifts as a storyteller to draw her audience still closer. We listened in rapt attention when she sang; when she began to whisper her lyrics (as she often does in the inspiring "Coat of Many Colors"), the audience leaned in even further. 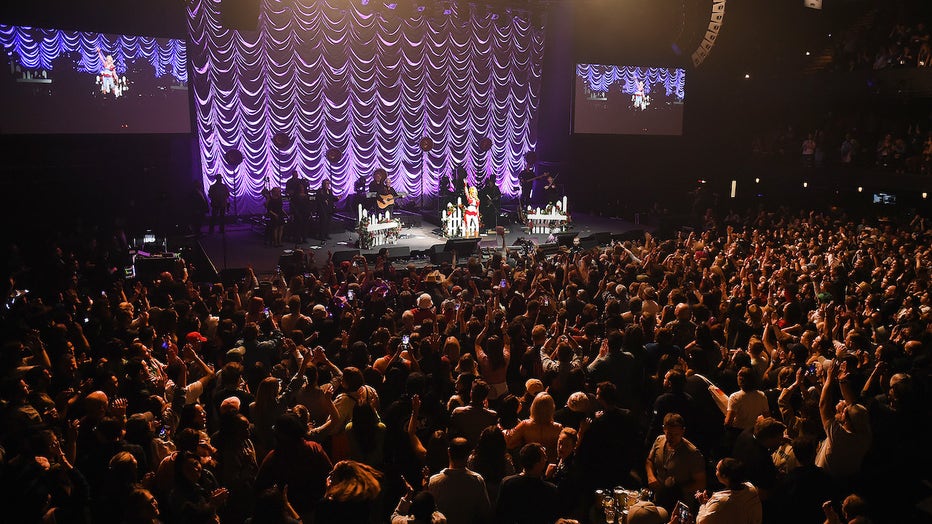 And maybe even that was intentional. Inching closer to the stage from my seat in the mezzanine gave me a better view of the crowd standing below. They were dappled in rainbow light, as though we’d been transported from Austin to a church in Tennessee, bathed in stained-glass sunbeams.

As for the treasure trove of songs she’s written? While she has no problem taking credit for their success (and clearly still delights, after all these years, in the fat stacks of cash that songs like "9 to 5" and "Jolene" have made her), it’s apparent that in her mind, those songs also belong in part to the people who inspired them. The profits from "Coat of Many Colors," for example, went to her mother, who made the coat in question. Even the beautiful bank-teller who inspired "Jolene" got a shout-out.

And I can tell you that because Dolly is, above all else, a storyteller. The biographical details scattered throughout the evening were mostly tales she’s told before (though she also broke some news when she announced that "Run, Rose, Run" will become a movie produced with Reese Witherspoon’s production company Hello Sunshine and that Parton intends to play a role in the adaptation). But knowing the stories ahead of time didn’t make their telling any less captivating.

Dolly’s the Grand Canyon, but she’s also what you’d call just folks, there to spin a few yarns, sing a few songs and pass the time with roughly 2,500 of her closest friends.

When she sang "Here You Come Again," 2,500 people swayed. When she sang "9 to 5" — ostensibly her closing number — and asked 2,500 people to sing the chorus for her, 2,500 people sang. And when she came back for the inevitable encore ("I Will Always Love You," naturally), you could hear a pin drop.

I still have no idea what an NFT is. But I’ve got one now, because Dolly welcomed us into the Dollyverse and gave us a little gift so we could remember our time together. I’m glad I have it — but it wasn’t necessary. An evening spent in the presence of Dolly Parton? That’s not the kind of experience you forget.

9 to 5 (1980): Tumble out of bed and stumble to Tubi to pour yourself a cup of this classic comedy, which (depressingly) remains just as relevant today as it was on its release. Luckily, it’s also just as funny as it was then, thanks to the sharp and lively performances of its three legendary leads. Rated PG. 109 minutes. Dir: Colin Higgins. Featuring: Dolly Parton, Jane Fonda, Lily Tomlin, Dabney Coleman.

Unlikely Angel (1996): This holiday movie originally aired on CBS, and its formula is simple, yet bonkers: take "It's a Wonderful Life," make Clarence the lead and turn him into a no-nonsense country singer played by Dolly Parton, cast Roddy McDowell as Saint Peter, throw in a dash of "Ghost" and call it a day. After Ruby (Parton) dies in a car crash, she learns that thanks to the selfish choices she made in her time on earth, she won't enter the pearly gates if she can't reunite a family torn apart by a tragic loss. So naturally she becomes their housekeeper. Oh, and she sings, of course. Rated G. 91 minutes. Dir: Michael Switzer. Also featuring Brian Kerwin.