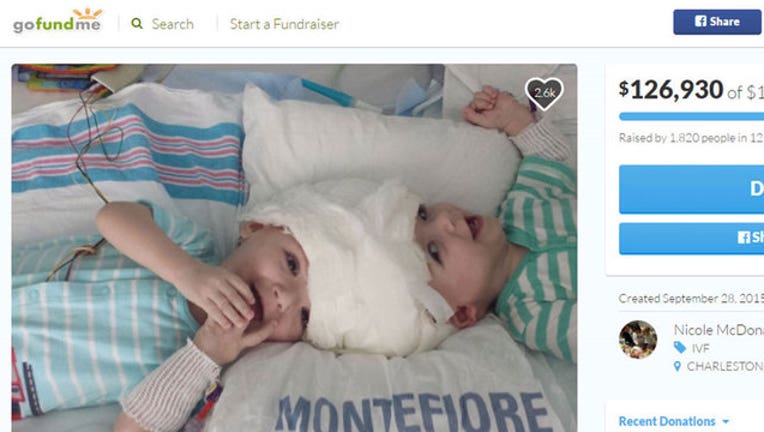 Jadon and Anias McDonald, 13-month-old twins, conjoined at the head, were separated by a team of surgeons at Montefiore Medical Center in New York City Friday morning. GoFundMe.com

At about 5 a.m., the twins' mother, Nicole McDonald, took to Facebook to announce the 16-hour surgery was a success.

"There was a point where Dr. Goodrich debated stopping the whole procedure because it was just too risky but an opening presented itself and they went for it and it ended up being the right call," wrote McDonald. "The next few months will be critical in terms of recovery and we will not know for sure how Anias and Jadon are recovering for many weeks.

She went on to say that one of the boys is doing fine, but the other may have complications.

"They had to reopen Anias' incision. He's still in surgery. No idea how much longer it will be. My heart aches for him all alone down there without his brother. Such a scary time to be alone," wrote McDonald several hours after the boy had been separated from his brother.

The cost of the surgery is $2.5M which will be covered mostly by insurance. The family established a GoFundMe page for the remaining $100,000. As of Friday morning, the McDonalds had raised more than $129,000.

Conjoined twins occur in one out of every 2.5 million live births.