Witnesses said the crowd surge Saturday night in the Itaewon area caused "a hell-like" chaos as people fell on each other "like dominoes."

SEOUL, South Korea - Concerned relatives raced to hospitals in search of their loved ones Sunday as South Korea mourned the deaths of more than 150 people, mostly in their 20s and 30s, who got trapped and crushed after a huge Halloween party crowd surged into a narrow alley in a nightlife district in Seoul.

Witnesses said the crowd surge Saturday night in the Itaewon area caused "a hell-like" chaos as people fell on each other "like dominoes." Some people were bleeding from their noses and mouths while being given CPR, witnesses said, while others clad in Halloween costumes continued to sing and dance nearby, possibly without knowing the severity of the situation.

"I still can’t believe what has happened. It was like a hell," said Kim Mi Sung, an official at a nonprofit organization that promotes tourism in Itaewon.

Kim said she performed CPR on 10 people who were unconscious and nine of them were declared dead on the spot. Kim said the 10 were mostly women wearing witch outfits and other Halloween costumes. 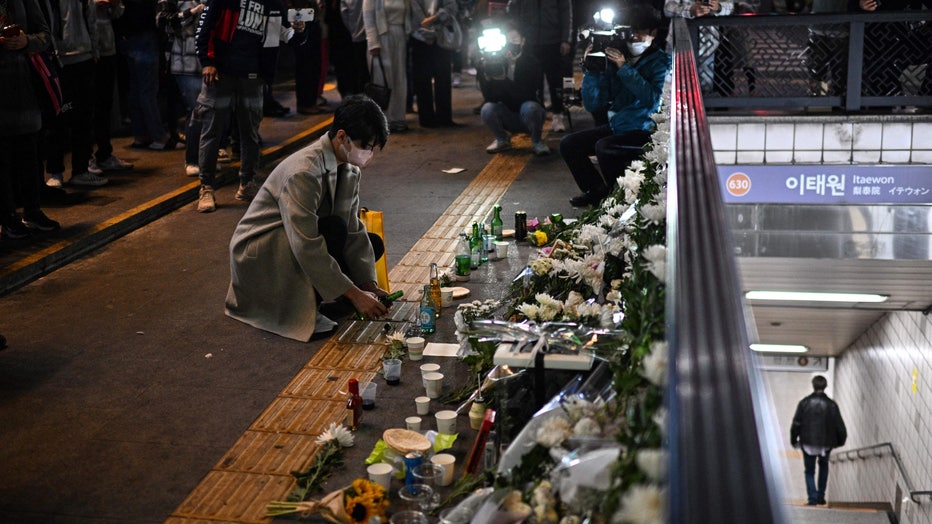 A man pours a glass of an alcoholic beverage, in tribute to those who were killed in a Halloween stampede late on October 29, in the district of Itaewon in Seoul on October 30, 2022.

The crowd surge is the country’s worst disaster in years. As of Sunday evening, officials put the death toll at 153 and the number of injured people at 133. The Ministry of the Interior and Safety said the death count could further rise as 37 of the injured people were in serious conditions.

Ninety-seven of the dead were women and 56 were men. More than 80% of the dead are in their 20s and 30s, but at least four were teenagers.

At least 20 of the dead are foreigners from China, Russia, Iran and elsewhere. There is one American among the dead, the Interior Ministry said in a release.

An estimated 100,000 people had gathered in Itaewon for the country’s biggest outdoor Halloween festivities since the pandemic began. The South Korean government had eased COVID-19 restrictions in recent months.

Witnesses said the streets were so densely clogged with people and slow-moving vehicles that it was practically impossible for emergency workers and ambulances to reach the alley near Hamilton Hotel swiftly.

Authorities said thousands of people have called or visited a nearby city office, reporting missing relatives and asking officials to confirm whether they were among those injured or dead after the crush.

The bodies of the dead were being kept at 42 hospitals in Seoul and nearby Gyeonggi province, according to Seoul City, which said it will instruct crematories to burn more bodies per day as part of plans to support funeral proceedings. 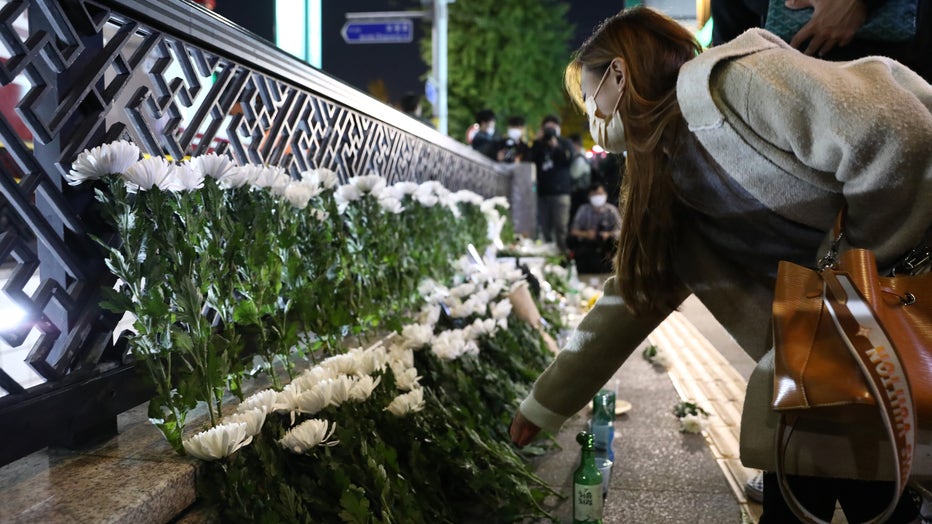 A woman lays flowers as she mourns at the street of a deadly stampede during a Halloween festival on October 30, 2022 in Seoul, South Korea. 151 people have been reported killed and at least 150 others were injured in a deadly stampede in Seoul's Ita

Around 100 businesses in the Hamilton Hotel area have agreed to shut down their shops through Monday to reduce the number of partygoers who would come to the streets through Halloween day.

While Halloween isn’t a traditional holiday in South Korea — where children rarely go trick-or-treating — it’s still a major attraction for young adults, and costume parties at bars and clubs have become hugely popular in recent years.

Itaewon, near where the former headquarters of U.S. military forces in South Korea operated for decades before moving out of the capital in 2018, is an expat-friendly district known for its trendy bars, clubs and restaurants. It’s the city’s marquee Halloween destination.

South Korean President Yoon Suk Yeol declared a one-week national mourning period on Sunday and ordered flags at government buildings and public offices to fly at half-staff. During a televised speech, Yoon said supporting the families of the victims, including their funeral preparations, and the treatment of the injured would be a top priority for his government.

He also called for officials to thoroughly investigate the cause of the accident and review the safety of other large cultural and entertainment events to ensure they proceed safely.

"This is really devastating. The tragedy and disaster that need not have happened took place in the heart of Seoul amid Halloween (celebrations)," Yoon said during the speech. "I feel heavy hearted and cannot contain my sadness as a president responsible for the people’s lives and safety." 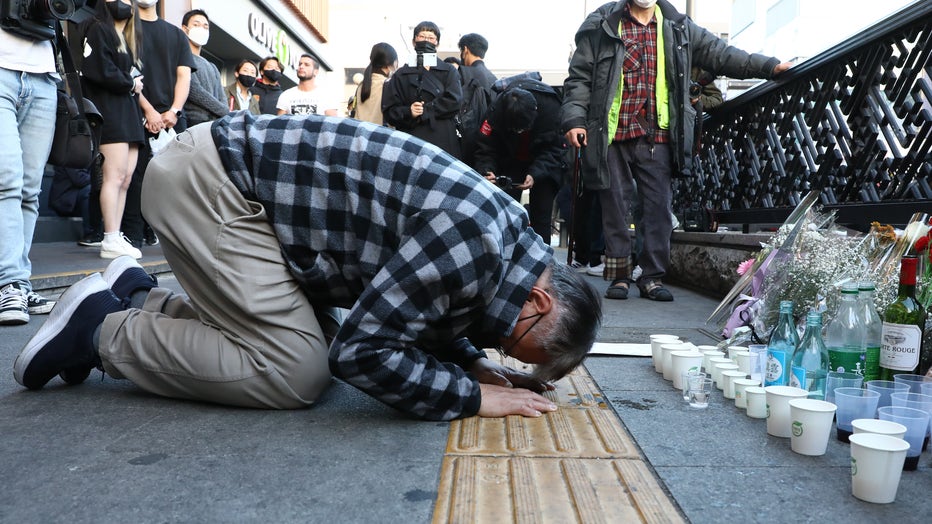 A man bows as he mourns at the street of a deadly stampede during a Halloween festival on October 30, 2022 in Seoul, South Korea. (Photo by Chung Sung-Jun/Getty Images)

After the speech, Yoon visited the Itaewon alley where the disaster occurred. Local TV footage showed Yoon inspecting the alley filled with trash and being briefed by emergency officials.

It was not immediately clear what led the crowd to surge into the narrow, downhill alley. One survivor said many people fell and toppled one another "like dominoes" after they were pushed by others.

The survivor, surnamed Kim, said they were trapped for about an hour and a half before being rescued, as some people shouted "Help me!" and others were short of breath, according to the Seoul-based Hankyoreh newspaper.

Another survivor, Lee Chang-kyu, said he saw about five or six men push others before one or two began falling, according to the newspaper.

In an interview with news channel YTN, Hwang Min-hyeok, a visitor to Itaewon, said it was shocking to see rows of bodies near the hotel. He said emergency workers were initially overwhelmed, leaving pedestrians struggling to administer CPR to the injured lying on the streets. People wailed beside the bodies of their friends, he said.

A man in his 20s said he avoided being trampled by managing to get into a bar whose door was open in the alley, Yonhap news agency reported. A woman in her 20s surnamed Park told Yonhap that she and others were standing along the side of the alley while others caught in the middle of the alley had no escape.

Choi Seong-beom, chief of Seoul’s Yongsan fire department, said that bodies were being sent to hospitals or a gym, where bereaved family members could identify them. 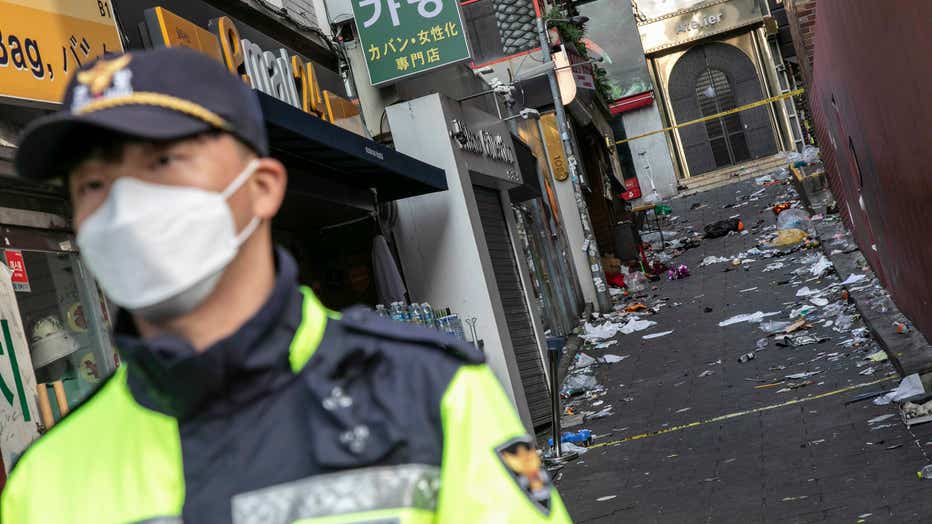 Police stand guard at the accident site in Itaewon in Seoul, South Korea on October 30, 2022. (Photo by Jean Chung for The Washington Post via Getty Images)

"All our thoughts are with those currently responding and all South Koreans at this very distressing time," he tweeted.

Jake Sullivan, the U.S. national security adviser, tweeted that reports of the disaster were "heartbreaking" and said Washington "stands ready to provide the Republic of Korea with any support it needs."

Saturday’s deaths will likely draw public scrutiny of what government officials have done to improve public safety standards since the ferry disaster.

This was the deadliest crushing disaster in South Korean history. In 2005, 11 people were killed and around 60 others were injured at a pop concert in the southern city of Sangju.

In 1960, 31 people died after being crushed on the stairs of a train station as large crowds rushed to board a train during the Lunar New Year holidays.

It was also Asia’s second major crushing disaster in a month. On Oct. 1, police in Indonesia fired tear gas at a soccer match, causing a crush that killed 132 people as spectators attempted to flee.

More than 1,700 response personnel from across the country were deployed to the streets to help the wounded, including about 520 firefighters, 1,100 police officers and 70 government workers. The National Fire Agency separately said in a statement that officials were still trying to determine the exact number of emergency patients.